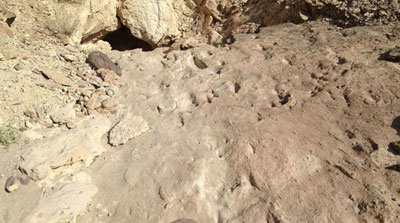 This 800.000 year old testimony was unearthed in the course of a fieldwork campaign in the Eritrea Danakil depression by the team coordinated by the “Sapienza” University of Rome (Italy) and the National Museum of Eritrea.

The “Eritrea-Italian Danakil Expedition” – an international research group coordinated by the “Sapienza” University of Rome – during the most recent fieldwork campaign uncovered an 800.000 fossilized surface bearing imprints that appear to include footprints made by ancient human ancestors. The surface was discovered in a site, not far from Buia, called Aalad-Amo. These footprints could be the first to be unequivocally identified as attributable to H. erectus, the only hominin species that inhabited the area at the time. This is a key species in the understanding of human evolution; it evolved into the large-brained ancestors of modern humans.

“Fossil sets of footprints are extremely rare. They have been discovered in Tanzania (Laetoli, 3.7 Ma) and in Kenya (Ileret and KoobiFora , two sites dated to 1.5-1.4 Ma) but never in contexts datable to the Middle Pleistocene.” – says AlfredoCoppa, paleoanthropologist- “if confirmed, through the photogrammetric study currently underway and further evidence, the Eritrean footprints will allow us to gain further significant insight into  H.erectus.”

The prints present themselves as very similar to those left by modern humans and could therefore provide important indications on foot anatomy and locomotion of our ancient ancestors. The presence of prominent medial longitudinal arches, the details of the toes and the alignment of the big toe to the others are features that make human feet distinctive and efficient when walking and running. These prints can also provide unique information unattainable from other sources such as bone fragments and teeth, such as stature, body mass, and locomotor biomechanics including giant walking speed.

The probable H.erectus footprints found at Aalad-Amo are preserved in a hardenedsilty sand sediment that was partially uncovered by water flooding. Currently, 26m2 of the sediment bearing the footprints is exposed and a potentially large portion of the surface remains covered by overlying sediments. Analysis of layers above and below this site, presenting similarly solidified sediments, suggest that more than one fossilized surface might be preserved. The footprints, potentially representing more than one individual, are oriented in a North-South direction and are aligned with other imprints possibly attributable extinct fauna. The abundance and diversity of prints preserved in this small exposed area, combined with geological and fossil evidence, suggest that what is today a desert depression was once a lakeside buffered by grassland.

“The importance of recent discoveries emphasizes the need to urgently investigate the site further, in fact, the ephemeral nature of soft sediments causes these surfaces to be altered and eroded very quickly.” Underlines Alfredo Coppa “The area is characterized by a long geological succession that spans over hundreds of thousands of years, that has the right characteristics to preserve imprint assemblages as well as fossils. The richness of the study area is confirmed by the very recent discovery of ulterior human fossil remains in two different areas of the nearby Mulhuli- Amo site thus bringing the minimum number of individuals count to at least 5 or 6”

The Early-middle Pleistocene represents a period of major transition in human evolution, when some of our primitive H.erectus ancestors evolved into species with larger brains and more modern bodies. However, the human fossil record is extremely scanty, fragmentary and disparate between 1.3 and 0.5 million year old. This is notably true for postcranial (bellow the head) elements that are rare in Africa during this period. The c.1 million year old human fossil from sites such as Buia provide key evidence in this gap, along with specimens from sites such as Daka (Ethiopia) and Tighenif (Algeria). The Buia  fossils  have an intriguing blend of primitive and more modern characteristics, combining more primitive H.erectus traits with an  increase in brain size and some modern aspects of hip structure. In this way, the Buia fossils link H.erectus with anatomy seen in later species such as H. heidelbergenesis.

Research is coordinated by the paleoanthropologist Alfredo Coppa  of the “ Spaienza” university and is conducted in synergic manner with other Italian universities (Florence, Padua, Turin), foreign universities (Poitiers, Tarragona , Toulouse), and the MiBACT (Pigorini Museum ISCR). It was made possible thanks to  the support of the Eritrean Government and the Italian Embassy in Asmara. Funding:  Grandi Scavi Sapienza, MIUR, MAE, AMNH in New York, as well as private sponsors (Enertronica, Eraclya, Gruppo Piccini, I. Messina , Lauria A. and RrTrek).