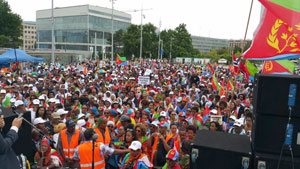 Asmara, 21 June 2016 – Eritreans and friends of Eritrea staged a mass demonstration in Geneva, Switzerland Today, June 21, 2016. The mass rally was aimed at protesting against the latest appalling report of the Commission of Inquiry on Human Rights in Eritrea.

According to the coordinating committee of the peaceful demonstration, the participants of the mass rally include Eritreans and friends of Eritrea from Sweden, Norway, Denmark, Germany, UK, Italy, France, the Netherlands, Belgium, Spain as well as from the US, Canada, Australia and others. The participants from the different countries used private cars, buses and some flow to the venue of the mass rally.

The demonstrators were carrying placards in the languages of Tigrigna, Arabic, English, French and German that read, “Viva Eritrea”, “No More Lies”, “Lift Unjust Sanctions”, “We Condemn UN Deception”, “Stop Violating Eritrean Rights”, “Enough is Enough”, “Never Kneel Down”, and others.

The demonstrators also stated that the politically motivated report does not represent the real situation in Eritrea. Its aim is targeting and compromising the Eritrean Independence and sovereignty.

The demonstrators further voiced that the report is a continuation of the effort to demonize and to delegitimize Eritrea in the international arena and erode the final and binding Eritrea-Ethiopia Boundary Commission Delimitation and Demarcation decision. They also condemned the recent attack by the regime in Ethiopia against the sovereign Eritrean nation and they called on the UNSC to condemn the unwarranted military attack and to request Ethiopia to abide by the final and binding EEBC rulings.

Representatives of the demonstrators finally submitted the signatures of 223,810 Eritreans and friends of Eritrea to the concerned office of the UN in Geneva.