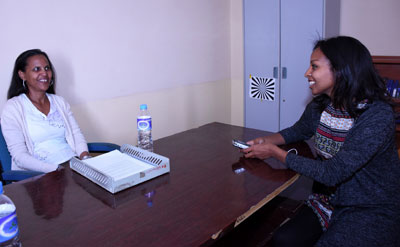 Today’s Q&A’s guest is Ms. Yordanos Abraham, a proud and confident woman from Canada. She is visually impaired but it did not stop her from visiting Eritrea.
Here is her impression on the country.

Great meeting you Yordanos, please tell us about your background…

Thank you for welcoming me, my name is Yordanos Abraham I was born in 1965 in Asmara and now I live in Toronto, Canada.

When did you leave Eritrea?

Well, I have been living in Canada for the last 27 years. I left Eritrea in 1987 and then I arrived in Canada.

Memories of Eritrea back then…

I left when I was 21, so, yes, I do remember the life in Asmara very well.

I was diagnosed with glaucoma, which damaged the retina so when I checked up with the doctors at that time I was asked to have a surgery but the conditions weren’t suitable for such surgery, so I left Eritrea.

I live on my own in Canada. It was very difficult at the beginning. I was very young, the cultural shock, and the weather. I had to start everything from scratch, going back to school and learning the language without failing to recall the number of training on mobility, on how to use a white cane and also how to move in this new place. It was frustrating but with time I managed to integrate myself. However, my heart was always in Eritrea.

Your first time in Eritrea since you left?

This is my second time in Eritrea, however, the first time was in 1993. This time I could really have a greater idea of reality on the ground.

The reality on the ground you said, how did you imagine Eritrea before your arrival?

Before coming I thought the city was empty with its ghost houses, a place where there was nobody and where nothing was moving but when I landed I realized that it was completely the opposite from what the media is feeding us with. Everything I witnessed from the water dam construction, the people. Everywhere I go and the peaceful feeling I have is how it’s so different from when I left the country 27 years ago.

I did many things since I arrived in Eritrea. There were street performances, people were explaining to me the costumes, and children were singing and trying to be comedians. I never seen such beautiful and talented people here. The creativity and how from little things they managed to make great costumes and decoration, I witnessed during the Independence Day celebration as well as the thousands gathering in remembrance of our martyrs.

I also went on a tour to the Gash Barka region. I visited Bisha, Sawa, Kerkebet. In Kerkebet, I couldn’t believe what they were explaining to me and how huge the dam is. The students in Sawa also, singing together, especially the girls and the self-confidence they expressed. In Bisha, the hospitality and the tour was well-explained and impressive.

On June 24th, we have a day in Keren with the hard-hearing people as well as an event will be organized on the 27th for the visual impaired in Eritrea. I am hoping for a more digitalized system for our visual impaired.

We just started an organization in January 2015, in North America called Eritrean and Visual Impaired Organization (EHVI). Eritreans living in North America, we are scattered everywhere, one reason I came to Eritrea at this time is to bring computers to the visual and hard-hearing people. We are about 20-25 active members and more than 50 in total.
Initially, a few years ago, I met someone who lives in Auckland, United States, Mr. Araya Efrem, and we started to discuss and fundraise.

I was writing to him an email that I needed his phone number and when I explained to him that I was visually impaired he couldn’t believe that I was writing him back by email. That’s when the idea of raising awareness on the situation of visual impaired Eritrean people came. Thus, another person was willing to raise awareness on ill-impaired also.

The organization then grew to include technology sharing and fundraising with Eritreans in the homeland on the importance of using computers to ease their daily life and education. Right now, we just started working with institutions here in Eritrea. It is still in process as I met Prof. Tadesse Mehari, Executive Director of the Commission for Higher Education, as well as Minister of Labor and Human Welfare, Mr. Kahsai Ghebrehiwet.

What I hear it’s not right. What can we do other than fight against it? We have to be strong, keep it up and I am in full spirit with my people in Geneva. The struggle continues.

Message from the Ministry of Agriculture