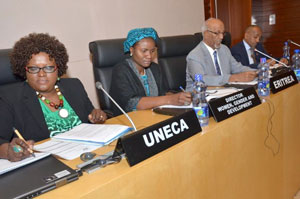 AUC in Collaboration with the Permanent Mission of the State of Eritrea hosted a Seminar: Women’s Empowerment and Development: the Eritrean Experience

AUC in Collaboration with the Permanent Mission of the State of Eritrea hosted a Seminar: Women’s Empowerment and Development: the Eritrean Experience

Addis Ababa, Ethiopia, 20June 2016: In a bid to contribute to the success of the AU theme of the year, the Permanent Mission of the State of Eritrea to AU and UNECA in collaboration of the AUC has today organized a seminar under the theme: Women’s Empowerment and Development: the Eritrean Experience to share Eritrea’s experience in regard to the policies adopted and the actions taken to improve the livelihood of women, women’s empowerment and promote gender equality. The seminar was attended by ambassadors, diplomats, Journalists, AUC and UNECA officials.

Speaking during the seminar, Mrs. Mahawa Kaba Wheeler, Director of Women, Gender and Development (WGDD) of the AUC applauded Eritrea’s progress to ensure land ownership legislation for women, secure education for girls in highlands and nomadic areas, the criminalization of Female Genital Mutilation (FGM) as well as the successful multi-sectorial approach on addressing gender equality. Furthermore, Mrs. Wheeler underscored that Eritrean women have earned their rightful place in the society through active participation and contribution to the struggle for national independence and nation-building efforts. “After independence, the Eritrean women, through their Union, the National Union of Eritrean Women (NUEW), has worked studiously to ensure the socio-cultural, economic and political empowerment of women through various innovative projects and gender mainstreaming in government institutions” the director noted.

H.E. Ambassador Araya Desta, Permanent Representative of the State of Eritrea to the AU and UNECA expressed his honor and pleasure to welcome all participants to the seminar.
Continuing his deliberation, he stated that during the days of the armed struggle for independence, the National Union of Eritrean Women (NUEW) was established in the liberated areas. The enhancement of the role of Eritrean women in all aspects of life, and guaranteeing their equality has been a top national priority. Women empowerment remains at the center of Eritrea’s development strategy which is firmly anchored in social-justice, self-reliance, and popular participation and ownership.

Furthermore, he underlined, the success Eritrea has registered in the empowerment of women include, inter-alia, increased participation of women in the socio-economic and political life of the society, achieving in advance the MDGs target of reducing maternal mortality by two-third, ensuring the right of women to own land and property, and effectively combating violence against women and harmful traditional practices.

However, in patriarchal society, emancipation of women for social revolution and finally earn the right place was not easy, according to Ambassador Desta, like many of the countries of the developing world. Hence, the experience of Eritrean women is not much different from the other developing countries. It is in that regard that more efforts and a continuous struggle must be enacted. Moreover, the Ambassador reiterated that with the full support of the government of the State of Eritrea, the National Union of Eritrean Women has made the empowerment of women a national priority, and committed to a development agenda grounded in social justice and gender equality.

Coordinator African Centre for Gender social Development policy division of the UNECA, Ms. Thokozile Ruzvidzo in her remarks recognized the efforts undertaken by the AU Head of States and Government for dedicating this year’s theme, “this is an acknowledgement that African governments put significant recognition on the importance of the rights of women and that it’s important to ensure that women enjoy their rights as any citizen of the continent”. Ms. Ruzvidzo congratulated the State of Eritrea for organizing the seminar to share with participants and the rest of the world how Eritrea is progressing in empowering women as well as addressing gender inequality. This year the scorecard will focus on women’ political, social and economic rights, Ms. Ruzvidzo appeal to the Ambassador of Eritrea that his country will be one of the countries that will be awarded.

Participants had the chance to watch a short documentary film titled the ‘Eritrean Women’ have had the opportunities for lengthy interactions.