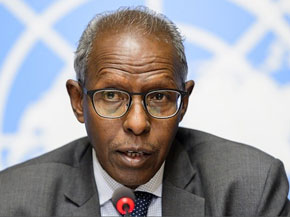 STATEMENT BY H.E. MR. YEMANE GHEBREAB
HEAD OF DELEGATION
DURING THE INTERACTIVE DIALOGUE WITH THE COMMISSION OF INQUIRY ON ERITREA
32ND SESSION OF THE UNITED NATIONS HUMAN RIGHTS COUNCIL

STATEMENT BY H.E. MR. YEMANE GHEBREAB
HEAD OF DELEGATION
DURING THE INTERACTIVE DIALOGUE WITH THE COMMISSION OF INQUIRY ON ERITREA
32ND SESSION OF THE UNITED NATIONS HUMAN RIGHTS COUNCIL
21 JUNE 2016, GENEVA

Yesterday, June 20th, was a day of remembrance and rededication in Eritrea and among Eritrean communities abroad. The people of Eritrea paid tribute to over 85,000 of their fellow citizens, men and women, who died fighting for the liberation, and then the defense, of their country and pledged to rededicate themselves to build a nation worthy of their martyrs.

Today, here in Geneva, right outside this building, thousands of Eritrean citizens are holding an all-day peaceful march calling for a fair and just treatment for their country. Many of them are recent arrivals and former national service members and they bring with them a petition to this Human Rights Council signed by160,000 Diaspora Eritreans and 40,000 friends of Eritrea.

Last month, the people of Eritrea celebrated 25 years of independence with pride and joy. They celebrated their hard-won and hard-defended independence and sovereignty, the peace, stability, security and harmony they enjoy as well as the progress they are making in the face of tremendous odds and daunting challenges and hardships.
The Commission of Inquiry denies this reality and claims that it has reasonable grounds to believe that Eritrea has committed “crimes against humanity” since the first day of its independence in May 1991. It unfairly accuses Eritrea of “enslavement, torture, persecution, rape, murder and other inhuman acts.” Stepping way over its mandate, the Commission has made the incredible judgment that the “human rights situation in Eritrea constitutes a threat to international peace and security,” as a fig leaf to try to send yet another African country to the International Criminal Court.

In its preliminary response of June 8, 2016, Eritrea has answered to these charges point by point. It has shown that the Commission has not presented solid evidence to support its grave and extreme accusations. Eritrea has also presented facts and figures that reveal that the methodology the Commission followed was so fundamentally flawed and lacked rigor and balance as to compromise its findings. The Commission has ignored all positive developments in Eritrea, including, but not limited to, any consideration of economic, social and cultural rights, violating the principle of indivisibility and complementarity of human rights. More crucially, the Commission’s case against Eritrea is legally indefensible as it fails to prove that the “crimes” it alleges were committed were indeed “persistent, widespread and systematic.”

In saying this, Eritrea is not suggesting that it has achieved all its human rights goals or that over the past quarter of a century there have been no individual transgressions of human rights in the country. No country, no matter how good its human rights record, can make such a claim. Eritrea readily acknowledges that there have been instances of violations of human rights and it has taken many of the perpetrators to justice. It is also focused on strengthening the judicial system and the entire administration of justice with a view to fostering the rule of law. It has taken significant measures in this regard over the past few years.

In addition to the measures that it is taking on its own, Eritrea has embarked on an active engagement in fulfillment of its international obligations. It has appeared twice in the UPR process, accepted 92 recommendations and is actively working to implement them, including through a cooperation agreement with the United Nations. It has established fruitful cooperation with the Office of the High Commissioner for Human Rights. Additionally, it has invited a number of thematic mandate holders to visit the country. To meet the needs and respond to the aspirations of its young people and to comprehensively address irregular migration, Eritrea has introduced a raft of national measures and is actively participating in regional and international arrangements. Migration figures for Eritreans are already declining and these trend needs to be sustained through enhanced cooperation.

More broadly, Eritrea, which has gone through a difficult period, is now entering a new phase in its short history as an independent nation. The economy is growing again, institutions are being built and programs that had been deferred because of more urgent priorities are back on the horizon. Eritrea’s regional and international engagement and relations are growing. Investment is coming to the country. A promising political, economic and social landscape is emerging.

Eritrea’s well known and appreciated approach to nation building, sustainable development and ensuring the fundamental freedoms and dignity of citizens is one of national ownership and responsibility. Eritrea always works to first mobilize internal resources and then seeks genuine and mutually beneficial partnerships.

The way forward must be based on fairness and justice. It must be to build on what has painstakingly been achieved in the past few years. It must be cooperation and collaboration which is already yielding important results.

On the other hand, the course of action advocated by the Commission of committing yet another injustice on Eritrea, of confrontation and escalation, can only lead- and here Eritrea does not want to mince its words- to an unmitigated disaster. It is no coincidence that the same week that the Commission released its report saw the worst outbreak of hostilities on the Eritrea-Ethiopia border since the end of the war 16 years ago. As we speak, Ethiopia is making preparations for a bigger military offensive and is contemplating a full scale war. It reckons that the gross accusations against Eritrea afford it with the perfect pretext, and that it may be now or never. It reckons that those who are only too eager to blame Eritrea will as usual look the other way and fail to act as Ethiopia commits what are truly crimes against humanity against its people and unleashes another war. It reckons that the guarantors of the 2000 peace agreement will continue to refrain from taking meaningful action to uphold international law.

In light of the unfairness of the accusations leveled against Eritrea and the gravity of its ramifications, Eritrea calls for a fair, just, constructive and collaborative approach, which in any case, must be the principle and spirit that guides the work of the HRC not only towards Eritrea, but for all countries.

Finally, Eritrea has tabled a constructive draft resolution reflecting its commitments and proactive stance to consolidate human rights and it calls on all member states to support it.