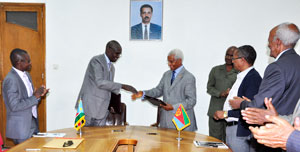 Eritrea and the Republic of South Sudan signed an aviation agreement Today, 24 June.

Asmara, 24 June 2016 – Eritrea and the Republic of South Sudan signed an aviation agreement Today, 24 June. The agreement is aimed at expanding the direct air flight service to and from the two countries.

Mr. Paulos Kahsai pointed out that the air flight agreement is aimed at strengthening the existing strong relations between the two countries.

According to the Eritrean Civil Aviation, the South Sudan Airways “The Golden Wings” is conducting cargo flights to and from Asmara- Juba once per week.

“Our Ultimate Goal: Ensuring the Safety of Our Patients”