Until death and beyond; The Roads to Asmara 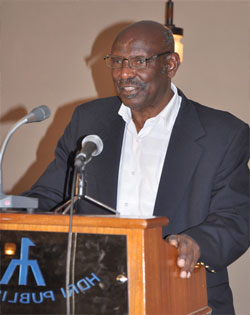 The days between May and June are heavily felt amongst Eritrean nationals. After celebration days of Independence, there follows the 20th of June; National Day dedicated to commemorate Eritrea’s Martyrs, starting from the armed struggle for Independence up to the recent feats of defending Eritrea’s sovereignty while making steady economic and social progress.

Nevertheless, despite the fact that the 20th of June is a date officially set in memory of Eritrea’s fallen heroes, in reality there isn’t a day in which Eritrea fails to remember them. It is also one of the chief reasons why Eritrean artists, poets and writers of all ages, most of the times produce themes that are relevant to such an important occasion.

Dr. Tekeste Fekadu is a medical surgeon and also one of the elite senior doctors that gained respect through years of service to the public. He is now an associate professor of surgery at the Orotta School of Medicine in Asmara.

He has authored several books including from ‘Journey from Nakfa to Nakfa: ‘Back to Square One’ (2002)’’, followed by ‘Mass Casualty Management under Unique War Situation’ on the same year. The list goes on followed by the 2006’s ‘Abdominal War Wounds: Challenges to Field Surgeons’, ‘The Tenacity and Resilience of Eritrea’ published in the year 2008. His last but not least, his concluding puzzle to his trilogy: ‘The Roads to Asmara’, has been in book stores of Eritrea since the 10th of this month.

‘The Roads to Asmara’ is the concluding volume to a magnificent trilogy that covers from 1976 until 1991, subsequent to ‘Journey from Nakfa to Nakfa: Back to Square One’ and ‘The Tenacity and Resilience of Eritrea’. In his trilogy, Dr. Tekeste Fekadu, shares personal medical experiences and memories from the war starting from his early days as a surgeon in the harsh reality of war.

The most likely inimitable history of young freedom fighters, was a bravery that challenged ordinary human capacity. The youth from all walks of life who joined hands in the armed struggle, had vowed to altruistically serve compatriots, civilians and the call of independence, while turning the war far beyond the exchange of fire and reoccupation of sovereign land, to a struggle of humanity for humanity.

War devours lives; and only did the EPLF and its young members knew how to make the inevitable devastation worth a glorious while that defeats death itself. Every breath was to be respected, worshiped even. That is why every single freedom fighter in charge of the smallest medical tool had the responsibility to ensure human survival at all costs and … at times, without adhering to standard medical procedures.

As we go on talking about these outstanding contributions to Eritrean literature, we could imagine the stunning medical odyssey of doctors, surgeons, nurses, pharmacists, first aid assistants, the very first selfless responders to all causalities: bare foot doctors and their patients.

The camouflaged hospitals sprawling liberated areas have an account of their own; they were places in which miracles happened with what little tools the medical practitioners had and within shabby underground concealed infrastructures lighted by nothing but most sincere smiles of medical assistants and the wounded themselves, guarantying one other with their presence.

In heavy war days, the number of deaths and serious injuries would increase by multiple folds. Although the humble camouflaged hospitals would be packed beyond their capacity, there would be no worries for the young injured Tegadeltis as a shade of a tree could serve as a surgical room. When there is no spotlight for heavy surgeries, no worries there too, a flash light would be more than enough.

How can a doctor or a nurse go on for days without sitting, eating or sleeping, performing surgeries of all kinds? Where the only ‘break time’ waas changing gloves. How could a patient itself turn into an assistant, while they themselves could hardley move ? How about the neurological hospital? Where freedom fighters suffering of mental challenges were not neglected but loved and cared for… educated even! Hard to believe right? But that is fact.

Beyond gun wounds, they also took upon the task of fighting communicable diseases; a freedom fighter could go on for days without food but not without health. … If only I didn’t have to take account of the news papers’ limitations, then I think I could go on to make a whole book just by mentioning more of those ‘unbelievable’ days.

“…The roads to Asmara is the third and concluding volume of Dr. Tekeste Fekadu’s saga of Eritrea’s war for independence from the standpoint of a surgeon in the Eritrean armed forces … A battle to save lives amid a battle to death. … Wielding a rod wreathed with a snake to bring the dead back to life with minimal medical provisions and whom a jealous Zeus struck down with a thunderbolt.” Professor Charles Cantalupo, Penn State University.

These medical miracles did not focus exclusively on the combatants. There was the very supportive people of Eritrea to look after as well. These enchanted camouflages opened their doors to innocent civilians wounded by the daily atrocious bomb shells of the enemy. It has been a basic principle in Eritrea’s history of self-sufficiency to ensure health provisions to all. A current glamorous reflection of a modern independent Eritrea, one of Africa’s top countries providing essential needs and rights, such as to education and health at that, as a matter of fact.

“… The department of Health got engaged in restricting and redefining its functions… The department was restructured into three main branches and a division…: The Military Health Service (MHC) Branch to provide service to all combatants and divisions, it included a central hospital, regional hospital, frontline hospitals, division hospitals, mini hospitals, and clinics. …” There was also “The Civilian Health Service (CHS) for the civilian population, to enhance accessibility of health facilities at community levels through village clinics. Traditional birth attendants and village health workers were the key workers. They were elected by the people and trained in order to be able to provide basic health services to their communities.” And then the branch of “…Pharmaceutical Service with two huge branches at MHC and CHS… And the Training and Research Section, providing training on the various categories of health provisions in the collaboration of the three main branches…” Dr. Tekeste Fekadu ‘The Roads to Asmara’.

A network that went beyond just the direct partakers of the armed struggle, but then furthermore again enhanced by joined hands of freedom fighters and the people.

“… The staff of our hospital in Adi Qeyh was in its busiest days… we did not sleep between operations ,we were extremely exhausted, also very worried about the siege of Asmara… after a few minutes we saw Kidane (aka Bante) dashing through the crowd at the entrance. He told us that Asmara was liberated! … Combatants and villages shouting into the sky…. My father asked about his children, I told him that they would come in the near future. … After that it became his chorus that his children left for their people and their country… Their blood was not spilt in vain, became the chorus of the people of Eritrea…” Dr. Tekeste Fekadu ‘The Roads to Asmara’.

The trophy of liberation we pass down to generations has that chorus at all its steps, ‘no blood is spilt in vain for the land of miracles’. What is more the trilogy of a medical odyssey is will now serve as a mirror of times.

“It’s echoed all over Eritrea, in that moment, that there is nothing Eritrea cannot do… such a story had to be true, if only for the sake of all who died in Eritrea’s armed struggle…” Professor Charles Cantalupo, Penn State University.

“All of the Eritreans who paid invaluably in blood and bones are, definitely, beyond winning the war, … all who fell in the journey from the most remote areas to the heart of Asmara: for a united, peaceful, stable and prosperous sovereign nation: Eritrea” Dr. Tekeste Fekadu ‘The Roads to Asmara’.

As Eritreans light candles to honor their martyrs, they do it heart fully in homage and mindful that they haven’t, neither will they ever, forget that the road to Asmara were not easy. have never been easy.

Eternal Glory to Our Martyrs!