Belief in Superstitions: A Direct Product of Partial Ignorance! 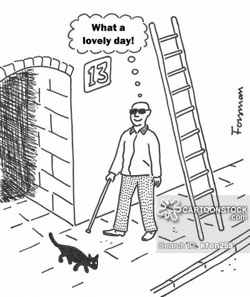 Adey Tsirha loved to drink coffee early in the morning after attending church mass. She trusted St. Michael but distrusted her neighbors very much. She loved God and hated people. She was, to put it mildly, a loner.

Anyway, Adey Tsirha’s coffee ceremony, which was held at seven in the morning every day, was a lonely and gloomy event. She sipped her steaming coffee alone and in a pensive mood. The cat, sitting by her side, played with its tail while waiting for a piece of bread that might inadvertently fall from Adey Tsirha’s trembling hands.

On the tray there are six handle-less porcelain cups: one for her, the rest for the spirits who come to pay her a visit (close encounters of the coffee kind!). Adey Tsirha’s invisible guests adore the swirling smock of incense and cherish the colorful tray, including the violent colors in her traditional dress. Adey Tsirha is a superstitious woman.

But before we proceed with superstition I would like to say something regarding Adey Tsirha’s extra work as a traditional psychiatrist.

Tesfai’s relation with his wife is ice cold. The ice however gets broken from time to time when one of them raises hell, an infernal concerto accompanied by the bawling of toddlers, the swearing and curses of the youngsters not to mention the nervous barking of Tarzan, the dog.

“I know why you don’t have a single cent on you when it comes to buying exercise books and pencils for the kids, because there is a whore bent on ruining the family….”

Tesfai is in need of medical help. If he continues like this he will probably crack up and that’s very dangerous for his already crumbling health.

Adey Tsirha lives a stone’s throw from the already broken family.  And she has heard and seen a lot during her long and lonely life as a widow.

When young and beautiful, she married a Sicilian named Signor Trombetti and had it nice until he died of a heart attack, a result of too much pasta, vino, formaggio and anger! He swore like a sailor, blaspheming the Madonna and hurling his working tools into the sky to probably strike his Dio che l’ha inganato (the God who cheated him). This could have accelerated his departure from this world.

“I have to talk to you. It is a secret,” whispers Tesfai as he seats himself on the hard wooden bench resting by the side of the squeaking bed. The cat, named Shashu because of her white coat, sneaks out of the room.

And then Tesfai pours out his heart to Adey Tsirha and by so doing purges his soul of its impurities. Adey Tsirha gets the message and prescribes the proper medicine which includes buying a white bleating sheep for the wife and telling the whore to go to hell.

Tesfai didn’t have to go to the psychiatrist to get cured of his ‘mental illnesses’. He didn’t have to send his problems to the Mr.-X–Replies-to-Your-Questions corner of a magazine or a newspaper. He found his psychiatrist in Adey Tsirha, and he didn’t have to pay a penny for the medical visit. On the contrary, he had a traditional coffee served to him for free!

During the lonely coffee time, Adey Tsirha never forgot to place a knife and menkerker (tongs for poking the glowing charcoal in the brazier) near the open door in order to keep the evil spirits away and the good spirits in. Once during the Derg time, a self-proclaimed communist regime, a relative jokingly told her to put a hammer and sickle instead. The idea was to ward off the evil spirit of communism from her house and from the country once and for all.

Superstition is everywhere in this small world of ours. From the Maori tribes of New Zealand to the staff members of mission control in Kennedy Space Center, the minds of people are never safe from its grips. Even great scientists such as Isaac Newton and Lavoisier were superstitious.

Superstition is a decayed form of religion or in other words a religious ‘nuclear waste’. When religion dies (as it surely must, to be replaced by newer revelations) it is in need of resuscitation. Very old religions when left on their own tend to change into superstitions because when the inner truth crumbles down only the outer shell remains to misguide its followers. Hence, a rotting religion does not take a long time to change into a heap of irrational and confused ideas where fanatics are manufactured and zealots are fashioned.

Superstition can also be described as the direct product of ignorance and the absence of strict scientific discipline. No scientific analysis can satisfy the rational mind, for example, as to why Adey Tsirha thinks that the slaying of a red rooster can alleviate her mental torture or stop her nightmares. But it helps Adey Tsirha and her likes as any faith healing practiced by Gospel singers in Texas and everywhere. It is all simply a matter of pure faith, mind over matter, a placebo effect!

During the armed struggle for our country’s liberation, Eritrea was cleansed of various types of superstitions, thanks to the EPLF leadership which brooked no cultural backsliding in its politicization program. People were taught that colonization was a reality and that the only way to drive the enemy away was by using real guns and bullets and not by black magic. No one could stop a bullet except by another bullet or through diplomacy.

Italians, Sicilians in particular, who arrived en masse in Eritrea in the 1920s, contributed a lot to the rise of superstition in the country. The population of ghosts (fantasma), phantoms and witches increased significantly during the Italian period. Porca miseria!

A friend of mine who lived in Asmara a long time ago kept on turning back home from Dongolo on his way to Massawa for vacation, just because a black cat kept crossing his path. After several spoiled holidays, he found out to his dismay that the black thing that crossed his path was none else than a frightened squirrel scurrying off to safety. The reason why he turned back was due to the Italian superstition that a black cat crossing your path meant disaster. Quando un gatto nero attravesa la strada, torna indientro e scapa via! (When a black cat crosses your path, turn back and run for dear life!)

If you saw a funeral hearse passing by, it was Tocca Ferro! Or Touch wood! I have been doing this as recently as a few years back for fear of being struck by a lightning and die on the spot. When I couldn’t find any metal object to touch I reached for the buckle on my belt. What else could I do?

You are traveling by bus or by plane and you suddenly realize that nuns or padres are part of the passengers. According to Italian superstition you will have no guarantee of arriving safely home because of these special guests. The bus may fall down into a river and you may end inside crocodiles’ stomachs or perhaps the pilot may try to force land the plane in a tennis court or a crowded beach. A plausible explanation is given for the above. Priests and monks are prone to attract God’s attention. Eager to take His own to paradise, the Good Lord may provoke a crash inviting in the process all passengers to a heavenly reunion.

When my friend was an 8th grade teacher in a far rural area a while ago, Gebru, a seventh grader and probably in the devil’s possession, entered the body of Gebritu, an eighth grader.

One day as usual he called the roll and he shouted:

“She is being exorcised, Sir.”

“She had been possessed, Sir.”

After a week had elapsed, Gebritu reappeared in class once again. She had been “absolved” by the evil spirit. As for poor Gebru, my friend was told that he was in chains awaiting further interrogation.

“Sir,” said the students by way of advice,” don’t look directly into Gebru’s eyes when he comes back to school.”

He told them not to worry. “I don’t believe in the Evil Eye.”

Rural and to a certain extent urban Eritrea has also its share of superstitious beliefs. For example, whistling in the house in the evening is believed to attract snakes or the devil himself. A windy day is a sign of ongoing war (this changed after liberation for some mysterious reasons). A howling dog forebodes death. A bee landing on you brings you fame and honor or flying over the compound or inside a house, an honored guest is on the way. If it is a preying mantis, you get new clothes. Arriving home in the evening and then going out may entail trouble or even death. Bad comments regarding people or events have to be spitted out (literally) lest they come true. A sun coming out and shining while it is still raining causes the female hyena to give birth to puppies. Among the English speaking peoples of the world in such aberrant situation, it is the devil, who, getting angry, is beating his wife. If you remember someone and that someone suddenly appears in front of you, you tell them that they will live to be very old “Emrika kinewh” would go the Eritrean saying, speak of the devil they say in English.

Many phenomena-wars, plagues, sudden audits have been advanced as evidence for the hidden hand of Satan in the affairs of Man, but whenever students of demonology get together the M25 London orbital motorway is generally agreed to be among the top contenders for Exhibit A.

Where they go wrong, of course, is in assuming that the wretched road is evil simply because of the incredible carnage and frustration it engenders every day. In fact, very few people on the face of the planet know that the very shape of the M25 forms the sigh odegra in the language of the Black Priesthood of Ancient Mu, and means “Hail the Great Beast, Devourer of Worlds.” The thousands of motorists who daily fume their way around its serpentine lengths have the same effect as water on a prayer wheel, grinding out an endless fog of low-grade evil to pollute the metaphysical atmosphere for scores of miles around.

Anyways what I’m trying to say is, superstitions never die but change forms. At present one can see the image of Santa Rita hanging from a modern car’s dashboard. It keeps the driver safe.

With such a mentality, it isn’t surprising to see nowadays images of saints in the form of stickers attached to computers to save the hard drive from collapsing! Goodbye Avast Anti-Virus!

NRS: The hub of multifaceted development and profound history