NRS: The hub of multifaceted development and profound history 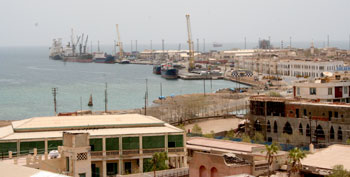 One of the six regions of Eritrea, the Northern Red Sea Region (NRS), is bordered with the Sudan and Ethiopia on the North-Eastern part, and is number one in its length from North to the South. The area of the land in the Northern Red Sea region is 34,236 square kilometers, which boasts a second place following the Gash Barka Region. Furthermore, the areal length of the land stretches up to 450 kilometers, while the coastal length is around 795.5 kilometers.

Based on the general census carried out in 2006 as well as the subsequent consents made in the respective sub zonal administrations, the Northern Red Sea Region has a population of 380,000. The most populated sub zone being Afabet, the Dahlak sub zone is the least populated, while the sub zone of Massawa is the most densely populated of the region. The sub zones of Ghindae, Nakfa, Afabet follow Massawa in their population density in a descending order. It should be noted here that the population density of these areas wavers based on the climate change and movement of the nomadic inhabitants. During the hot seasons of the plain lowland areas, the movement of people grows and an increase in the population of the subzones with cooler climate occurs at least until the hot season finishes. The general population of the sub zone shows gradual increase every year, but due to the lack of timely registration of the remotely located population in the information system, the statistics is not precise. With the growing awareness of the public in the importance of registration and possession of Identity Cards however, it is highly anticipated it will have a positive impact in the information system of the region.

Some of Eritrea’s highest grounds above sea level and the lowest are located in the Northern Red Sea Region. Enki’are Humer, a place located in the Foro sub zone, has an elevation of 3017 meters above sea level, while some locations around Bada and Koleli are situated around 100 meters below sea level. At summer, the lowest average temperature around the coast reaches up to 20 degree Celsius, while the highest average reaches up to 50 degrees. On the highland parts of the region however, the lowest average temperature is 10 degree Celsius, while the highest average reaches around 30 degrees. Average annual rainfall in the region is registered as 350 mm. the rainy season in the highland areas of the region is common from July to September, but the Bahri area of the region receive their rainfall from December to February. Some parts of the region, particularly the Eastern escarpments have their rainy season both with the highlands and the coastal areas accumulating a bountiful of 700to 1000 mm of rainfall annually.

The Northern Red Sea Region is equally endowed with natural resources that match with its area and geographical location. Seasonal rivers that drain from the highlands through the Eastern escarpments and vast plains to the Red Sea are other important features of the region. Most of the escarpments in the region, with the exception of some around the Adobha sub zone and the Nakfa sub zone, which drain to the West, are directed to the East. To mention some of the major rivers of the region; Zara, Hasta (Badi), Algena, Mo’u, Hiday, Felket, Mai Ule, Laba, Ein, Wekiro, Demas, Mai Atkemom, Ruba Hadas, Ali Gede, Eindeli, Regaili, Komeili and others.

The biggest advantage of the region is the vast and endless cultivable plains separating the coast from the Eastern escarpments. The region receives water drains from all the Eastern escarpments, which cause flooding and disaster on the local inhabitants and livestock. Some of the major incidents in the region include, Adobha in 2011, Emberemi in 2012 as well as the recent flood disaster in Foro on 6 December 2015.

The Northern Red Sea Region is a land of abundant natural, marine and land, resources as well as historical and cultural heritages. Appealing tourism sites, prospective investment platforms in marine resources on one hand, as well as legacies of history, civilization, identity, culture and valor are all housed in this region.

Looking at the geographical setting of the Northern Red Sea Region, there are towering mountainous escarpments with highland climate around the Northern sea escarpments as well as Rora-Habab and Hager, very hot plains including some with around 100 meters below sea level in the areas of Kuleli and Bada, places where one can experience three seasons in two hours, an ever green national park around the green belt area as well as the Wengebo plains, the Fidel-Pe and Denden trenches.

Some of the few naturally crafted beauties in the middle of the desert are the volcanic mountains of Bada, Buya, Dandero, Mae’bele, Erafa’ele and others. Besides, the natural hot springs and naturally steaming springs around Erafa’ele, Mai-Weue (Gahtelay) and Afabet are commonly visited areas by nationals and foreigners to heal skin diseases and nerve related problems. Furthermore, the strategic and commanding mountains and escarpments in the Sahel area possess a center stage in the Eritrean revolution against colonialism.

The Northern Red Sea Region possesses a port and nine bays as well as more than 300 islands in its 795.5 kilometers long coastline.  The Dahlak Archipelago and Hawakil islands are internationally renowned for the marine resources they are endowed with.

The structure of the coastline, north from the port city of Massawa is more or less straight, but to the south where most of the seaside villages and towns are located is full of gulfs. The longest gulf of Zula, located in this region, stretches 48 kilometers and is 8 to 15 kilometers wide. Inhabitants of this area depend on herding, fishing and trade.

Fundamentally, the Red Sea of Eritrea is full of resources. The marine bio-diversity in the Red Sea spans from, the unicellular phytoplankton seedlings to the enormous wales. Over 1000 different species of fish, 250 types of corals are found in the Red Sea. Besides, invertebrates, mollusks and gastropods as well as marine plants, such as the three different types of mangrove trees are among the major resources of the Red Sea. According to studies conducted over the past 25 years of independence, it has been confirmed that the depth of the Eritrean Sea is also a haven to 11 types of sea grass, five types of marine turtles, as well as over 72 different marine bird species. Furthermore, 17 different types of sea cucumber with high economic significance are found in the Red Sea.

Belief in Superstitions: A Direct Product of Partial Ignorance!