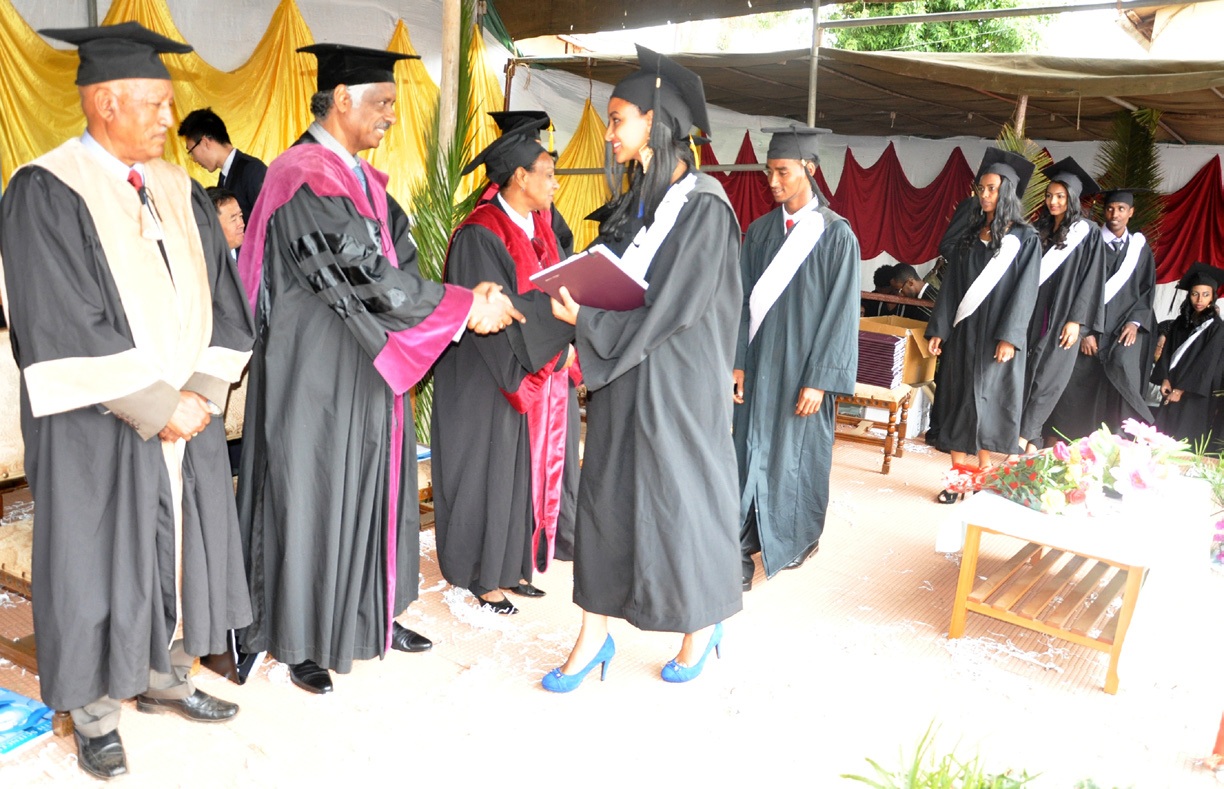 Having survived their exams, essays, practical studies and their dissertation papers, I think they should be proud to have made it there in one piece. In all seriousness, last week’s graduation is a milestone for each of them and their families, and it is to their loved ones that they owe their deepest thanks. After Saturday, they leave the protection of the College, the community of their friends, roommates, and teachers, to find and forge new communities of their own. Who knows where their individual paths will take them in the world beyond the compounds of Asmara University, but one thing is for sure, they are all ready to pay their dues to their country.

Saturday June 2nd 2016, saw the 8th commencement of Asmara College of Health Sciences Graduation, which graduated 367 students of whom 40% were women, of which a total of 120 and 247 students graduated in degree and diploma programs respectively.

Dean of the Asmara College of Health Sciences, Dr. Ghidea Gebreyohannes on her opening speech noted that, the college which began in 1995 was formed with the idea to produce competent health professionals and scholars who are equipped with requisite knowledge, professional skills, attitudes and ethical principles to address the national healthcare needs of the country and ever since its first commencement in 1999, the college has graduated up to 2583 students.

So what has been the secret behind Eritrea’s unparallelled success in the health sector? Eritrea over the last decade has been able to constantly nurture young generation of health alumni’s, part of the main reasons for this continuous success in the Health sector can simply be attributed to common sense policy making.

Eritrea’s development aspiration is to achieve rapid, balanced, home-grown and sustainable economic growth with social equity and justice, anchored on the self-reliance principle. Moreover, the Government places emphasis on community and individual rights as well as issues of social justice, such as access to education, health, food and equitable access to services regardless of locality. Based on the sector-specific policy documents, national priorities focus especially towards; food security; education; health; access to portable water at reasonable distance: roads and infrastructural development; environment and natural resources management; human and institutional capacity development and; information and communication technology. These all support concrete and measurable improvements in national development programs.

Today, on the horizon of yet another successful graduation of health professionals, I specifically want to concentrate on Eritrea’s Health sector achievements over the years.
The overall goal for the health system in Eritrea as articulated in the Health Sector Strategic Plan Development Plan (2013-2016) is the improvement of health status, general wellbeing, longevity and economic productivity for all Eritreans. Accordingly, over the last few years, the country has achieved remarkable progress on basic health indices. Key among them includes significant reductions in maternal and child mortality ratios, and HIV prevalence. In the period since independence in 1991, access to healthcare within a radius of 10 kilometers increased from 46 percent to a whopping 78 percent, while over 60 percent of the population enjoys access to health care facilities within a radius of 5 kilometers; leading substantial improvements in the access to and utilization of quality and timely healthcare. It is a given fact that Eritrea had already met all the health MDG targets before the 2015 deadline.

Eritrea has a positive and unique story to tell about health related Millennium Development Goals (MDGs). Eritrea is one of the few countries to have achieved the MDGs in health before the given deadline date. Infant and child mortality rates have reduced dramatically; immunization coverage has increased sharply; malaria mortality and morbidity have plummeted; and HIV prevalence has almost halved in a very short period of time.

Over the years, Eritrea’s march towards promoting equitable, accessible and affordable health services to the majority of its citizens has been commendable. Concerted government programmatic and resource investment in the health sector made it possible to reduce under-five mortality from 150 per 1,000 live births in 1990 to 50 by 2013. During the same period, the maternal mortality ratio decreased from 1,700 per 100,000 live births to 380. Significant reduction of maternal mortality has been achieved as well; from 998/100,000 live births in 1995 to 286/100,000 live births in 2014. The major interventions leading to these achievements have been the provision of effective health-facility delivery services, comprehensive immunization, family planning, nutrition interventions, control of communicable diseases including HIV and AIDS, tuberculosis (TB), malaria and, expansion of community based interventions.

To further improve maternal health, a Roadmap for Maternal and New-born Health has been in place, supported by the Campaign on Accelerated Reduction of Maternal Mortality in Eritrea (CARMME). The triple threat of HIV, TB and malaria is being effectively tackled through a partnership involving the Government of Eritrea; Global Fund on AIDS, TB and Malaria; and the UN system.

In a fight against Malaria, The Government of Eritrea in order to create an enabling operating and programming environment in the health sector: a series of costed strategic plans, with involvement of major stakeholders (with clear vision, goal, targets); fairly adequate funding mobilized; introduced relevant curricula in the University and satellite associate nursing schools with degree programs in medicine, dentistry, nursing, pharmacy, public health and clinical laboratory sciences; training of Public Health Technicians (PHTs) and deployment of Community Health Agents (CHAs); as a result, since 1998, Morbidity and mortality due to malaria have decreased by 85 percent and 90 percent, respectively.

Meanwhile, the HIV prevalence result from the 2010 Eritrean Population & Health Survey (EPHS) is 0.93%. HIV incidence has decreased from 45 per 100,000 in 2001 to less than 8 in 2012. Furthermore, data derived from numerous clients and blood donors continually show a reduction in HIV and syphilis positivity rates. Knowledge about HIV/AIDS is still maintained at a high level and condom distribution is also increasing. Although all these development are encouraging, there is more work to be done to control the epidemic further.

Despite the commendable achievements in the control and prevention of malaria, the threat of resurgence due to climatic changes, cross border transmission and partly due to the national strategy on irrigation expansion for food security, remains a real threat in the foreseeable future. Hence, the remarkable success achieved in preventing and controlling malaria with a reduction of around 90 percent in malaria morbidity and mortality, since 1999 should not lead to complacence in Eritrea.

Historically in Eritrea life expectancy at birth went from 39.1 in 1960 to 59.5 years in 2008. Infant (0-1 year old) and under-five mortality (0-5) has both shown extraordinary improvements: the former went from 122.2 to 40.8 deaths per 1,000 live births and the latter from 205 to 58.2 between 1975 and 20083. Progress in other sectors, e.g. water and sanitation and education, has also contributed to improved health outcomes. It is important to note that, owing to the relative isolation of Eritrea, information and resources are extremely limited. It is impressive that Eritrea is one of the few countries to achieve the Millennium Development Goals (MDGs) in health, particularly targets in child health.

Understanding how the health delivery system works across the country improves appreciation of how Eritrea has marched towards the achievement of health MDGs. This health delivery structure can be called a best practice and an innovation in a country with limited resources and with some of its populations located in hard-to-reach areas. One other critical area the Government of Eritrea has paid close attention is the development of adequate health facilities and infrastructure. Since independence in 1991, the number of hospitals increased from 16 to 28, health centers increased from 5 to 56 and health stations (including clinics and Maternal and Child Health(MCH) facilities) from 72 to 256.

However, Infrastructure improvement alone does not also automatically equate to quality health care delivery. The Government of Eritrea recognizes that health care facilities should be adequately resourced and well managed in order to bring a difference in the lives of communities they are meant to serve.

Nonetheless, one of the biggest challenges facing the Government of Eritrea is to provide quality health care services in all facilities, old and new. To prepare for that, three of the five strategic integrated priorities that the Government of Eritrea still focuses was on are: 1) Basic Social Services; 2) National Capacity Development; 3) Food Security and Sustainable Livelihoods; 4) Environmental Sustainability. Consequently improving programming in these strategic areas has helped the Government of Eritrea to among other things improve quality of health care delivery to its population over time. Basic Social services include primary health, WASH and education that are highly needed for the health care system to be vibrant. National capacity development will be required in national infrastructure, human resource development, research, and multi-sectorial programming that will sustain the health sector. The area of food security and sustainable livelihoods will boost the health care and nutrition needs of the nation to support a healthy nation. The environmental sustainability agenda is vital to buttress the agro based economy of Eritrea.

Despite the challenges targets and indicators show that as of 2013 Eritrea has achieved all three health MDGS: MDG-4 on child health, MDG-5 on maternal health, and MDG-6 on combating HIV/AIDs, Malaria and other diseases.

The Secrets! The lessons drawn from Eritrea’s successes in the health sector simply include: A strong Government, with the ability to motivate and mobilize people behind a clear goal is key to progress. The EPLF has managed to generate a unique sense of community among a diverse group of ethnicities and religions. Community participation and involvement in health service delivery both helps alleviate shortages of skilled staff and brings, services closer to the community. This has also had an important impact on awareness at the community level and, as such, has removed barriers to the dissemination of health information. Further investment in human capital as a key driver of development, is also seen as a drive to sustain Eritrea’s health services. Since independence the Government foresaw future needs and made long-term investments in health and education, although this has as yet not stemmed widespread poverty. Government ownership of development projects and programmes is important to ensure sustainability and commitment to goals, as well as to avoid unpredictable shifts in donor priorities and/or financial commitments. Effective coordination among sectors avoids duplication of efforts and allows for cost-effective projects. In the Eritrean health sector, what might have constituted rivalry between ministries has been transformed into opportunities to scale up services more efficiently. A strong understanding and pin-point assessment of the resources available to foster development encourages both realistic actions and common-sense policies.
With that Eritrea has witnessed tremendous amount of success in its health sector over the years but, such unprecedented success should not be a recipe for inertia or complacency, success must be supported by continuous efforts to keep it going.