Reflections on Graduation at CASS 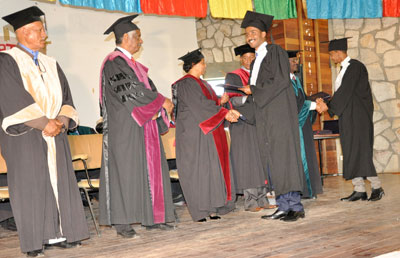 For the last year I have been teaching in Eritrea. On Tuesday 12 July 2016, I had the opportunity to participate in the 9th annual graduation ceremony at the College of Arts and Social Sciences, located in Adi Keih, Eritrea. A total of 180 students proudly received a Diploma or Bachelor of Arts Degree. The College of Arts and Social Sciences (CASS), currently within its sixth academic year as a stand-alone institution, has an annual enrolment of approximately 1500 students, nearly evenly split between males and females (specifically, 51 percent of students are male and 49% are female).

Located near several significant traditional and historical sites, the school has ten total academic departments, nine of which award degrees while one awards diplomas. Of note, CASS has also developed a new and exciting Master’s Degree program in collaboration with the University of Helsinki. The college also boasts a traditional and digital library, a growing collection of resources for visually impaired students, a bookstore, staff and student cafeterias, a recreation lounge featuring satellite television and games, several all-weather outdoor sports courts, highly successful intercollegiate athletic teams, and various student clubs.

Hours after Tuesday’s memorable ceremony, I retreated to my office to quietly reflect on how amazing it was to have been part of such a wonderful occasion. From the beginning of the ceremony until the end, things ran very smoothly, serving as a reflection of the hard work, dedication, sound planning, and selflessness of numerous people from across the close-knit CASS academic community and the surrounding areas. The organization committee’s large investments of time and effort in preparation were not overlooked or unnoticed, but were instead deeply appreciated and highly admired.

While graduation represents the culmination of a student’s academic journey, it is important to remember that it is only possible with the strong support and backing of friends, family, and communities. Simply, graduation is not a day so much about “me” but “we.” One glance into the CASS auditorium helped to illustrate just how so. Seats were filled by people from all walks of life, all sharing some connection, small or large, to the graduates. I will never forget the great pride exhibited by fathers, the loud, piercing ululating and tears of joy shed by mothers, or the sheer admiration expressed by friends and siblings as the graduates slowly, confidently strode across the stage, faces beaming with sheer happiness, to collect their certificates.

Earlier this year, I went back to the place I was born, visiting my family’s old home, as well as various family and friends. It was particularly special and especially moving since it was my first time meeting many of them, while others I had only met as an infant, over 20 years ago. When I was child, my family left Eritrea. Subsequently, I had the opportunity to visit and live in many countries around the world throughout Africa, the Middle East, Europe, and North America. Last year at about this time, I fulfilled a long-time family dream and goal – completing my Ph.D.

Shortly after graduation, I had the possibility to pursue a variety of different jobs and opportunities, but I kindly turned them down. My heart simply wasn’t into it. Somewhat perplexed, some classmates and colleagues asked me “Fikre, why?” I told them the answer, in just four words, “I’m going to Eritrea.”

Thereafter, many would respond, “Eritrea? Why?”

First, and most simply, it is home. No matter where you are in the world, you’ll always have a special bond with home. While it had been many years and although I traveled thousands of miles, I don’t think I’ve ever really left home.

However, another important reason I chose to come home to Eritrea is because of the youth and the students, such as the 180 new graduates of CASS. Not due to some egotistical rationale or saviour-type complex. But instead, because of the inspiration they provide and the admiration they elicit. I admire what they represent and the high-standing principles they wonderfully reflect. I tremendously respect how, regardless of whatever challenge may arise, instead of shirking responsibility or hesitating, so many of them choose to address it directly and head-on. I greatly admire their deep passion for learning, growth, and individual development and commend their pursuit for more.  I can only applaud the fact that the young graduates have already faced and overcome obstacles, barriers, and challenges that many others could barely fathom, let alone begin to face.

Last year, shortly before arriving at CASS, I recall preparing a large collection of materials and lessons I wanted to teach and share. As a teacher, I’d like to think I’ve been able to accomplish a lot of that. But never, in my wildest dreams, could I have expected to attain what I have from the students, many who graduated on Tuesday. Accordingly, to them, I humbly say Yekinyelay. Thank you for your efforts and hard work. Thank you for what you have taught me and for providing amazing lessons and wonderful examples that simply cannot be found in books.

On Tuesday, walking across the CASS campus and around the auditorium, I felt a slight hint of sadness because I understood that students that I had come to know, admire, and appreciate would soon be leaving. However, those emotions were soon overtaken by a deep and profound sense of happiness, anticipation, and pride in the realization that the young, limitless graduates were moving on to pursue their individual or family dreams and aspirations, and play a positive, constructive role in establishing a prosperous, harmonious nation.

Return of the star