A Glimpse to the Upcoming ICES 2016 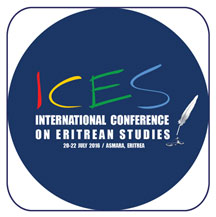 African Studies, Chinese studies, American Studies… All these scholarly well-established research areas have so far been incomplete as Eritrean Studies were missing from the picture. The amount of academic research is tremendous, featuring important and rich topics, including archeology, energy, politics, and the humanities, amongst others.

Hence, engaging scholars from inside and outside Eritrea comes at a very important juncture and it is more than ever the occasion to create an academic gathering in the country. Accordingly, 2016 holds much promise for Eritrea’s academic world with the launch of the First International Conference on Eritrean Studies (ICES), to be held July 20-22 at the Asmara Palace Hotel.

General and scholarly interest in Eritrea has grown in recent years, reflected by the numerous panel discussions, events and conferences held abroad. For Eritrea, organizing its own conference within the country comes at a crucial point in time. Many scholars who actually haven’t set foot in the country are deemed “experts” on Eritrea and have, very often, presented a biased narrative of the country or lacked updated or objective data and facts. Subsequently, their findings become the norm and serve as a reference for policymakers and media outlets.

Thus, about a year ago, a group of Eritrean intellectuals based in Asmara came up with the idea to organize a conference in the country and invite scholars from around the world. The main goal was to share ideas, develop academic networks, revive healthy intellectual discussion, and establish a more accurate reflection of Eritrea. Those initial thoughts of a conference on Eritrean Studies have now become reality and organizers are busily working to ensure its success.

Under the theme of Eritrean Studies – The Way Forward, the organizing committee has held several meetings with stakeholders since December 2015. One of them was a stakeholders’ meeting on the 30th of December 2015, establishing the progress made and the laying out the work ahead. Members of various government ministries, PFDJ officials, civil society representatives, representatives from the UN Development Program (UNDP), and various scholars were among the invitees. The Minister of Education, Mr. Semere Russom, opened the meeting by addressing the participants on the importance of creating a network of academics, enhancing the educational system in the country, and developing linkages and partnerships with other institutions. Professor Tadesse Mehari, Director of the National Commission for Higher Education, also extended his gratitude and the very timely conference, and suggested that the conference will challenge many of the misconceptions about Eritrea. He further stressed that the International Conference on Eritrean Studies will be a platform to share ideas and discuss issues, as well as a fundamental step towards institutionalizing of Eritrean Studies and keeping the records on Eritrea straight.

Mr. Mansoor Mirza, Policy Advisor at the UNDP in Eritrea, also expressed his confidence in the success of the conference and ensured that the UNDP would continue its financial and advisory support. He also stressed that organizing this first conference comes during a very judicious moment for Eritrea and that it will be an important platform for debate and discussion on important development issues.

According to Professor Zemenfes Tsige, chairperson of the organizing committee, the importance of having such conferences within the country is to counter the inaccurate narrative about Eritrea, which arises largely in debate and discourse taking place outside of the country. In addition, when looking at research or media reports on Eritrea, it is clear that “distance researchers” make most of the studies. As a result, within the academic world, simplistic narratives portraying the country as a regionally belligerent state while, very often, lacking contextualization reduces the perception of Eritrea.

Ownership of Eritrean Studies can be achieved by creating a forum for comprehensive discussions, engaging scholars, having sustained research, and involving public officials. Accordingly, the International Conference on Eritrean Studies will offer participants the opportunity to discuss various aspects, including local livelihoods, literature, the visual arts, migration and human trafficking, politics, diaspora issues, gender, energy, and technology, among many other subjects.

As the conference is due to begin in less than one week, the organizing committee is completing final tasks to ensure its success. Planned activities include panel discussions, presentations, several side events, cultural shows, writing and publication workshops, and visits to various local sites. Encouragingly, the conference’s call for papers attracted a huge amount of interest, with well over 200 research papers submitted from 27 countries. Subsequently, 134 were accepted, with 51 by local authors and 83 from abroad.  Overall, 38% are from Eritrea, 21% from the United States, 18.5% from Italy, 17.3% from Germany, and 16% from Great Britain. Additionally, there were papers sent from the Virgin Islands, New Zealand, Cameroon, Malawi, and Portugal, among many other countries.

A total of 11 papers by researchers from across the African continent were accepted, suggesting that the conference represents a great opportunity for Eritrean scholars to establish pan-African networks. As well, the large number of papers submitted by researchers within Eritrea, reflects the vibrant, active community of scholars based within the country.

Notably, the conference will feature the participation of journal editors, think tank groups, bloggers, and scholars from esteemed institutions such as Cambridge, Hamburg, Lund, Uppsala, Khartoum, Zurich, West Cape, Stanford, Oxford, and others. Presentations will include research by Professor Issayas Tesfamariam of Stanford University, as well as Professor Alessandro Bausi from the University of Hamburg and Professor Gianfrancesco Lusini of the University of Napoli l’Orientale, who will present their co-authored paper, The Philological Study of the Eritrean Manuscripts in Ge?ez: Methods and Practices. Samuel Graf, from the University of Zurich, will present on the topic of the Eritrean Diaspora in Switzerland, while respected local scholar Amanuel Zekarias will present a his paper titled, Regional Security: Mapping Eritrea’s National Security Approach in the Horn of Africa. As well, Professor Astier M. Almedom will present her paper, Why Researchers are always at Least One Step Behind their Human Subjects.

The International Conference on Eritrean Studies is the first step towards the institutionalization of Eritrean Studies and it will help ensure the sustainability of academic discussions on Eritrean Studies. A great opportunity for scholars to present their work to a large academic audience in Eritrea, it will also allow participants to raise important questions, share experiences, and develop ideas about various issues.

The Humor behind the Human Anatomy