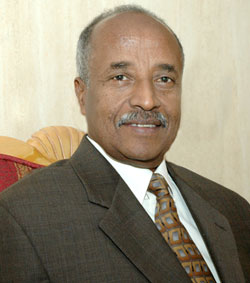 Statement by H.E. Mr. Osman Saleh, Minister of Foreign Affairs of the State of Eritrea During the Discussion on the Theme of the Year
‘2016: African Year of Human Rights  with a particular focus on Women Rights’

Minister of Foreign Affairs of the State of Eritrea

During the Discussion on the Theme of the Year ‘2016: African Year of Human Rights with a particular focus on Women Rights’ at the 27th Ordinary Session of the Assembly of the African Union

Mr. Chairman,
Let me at the outset convey to this august Assembly the warm greetings of your brother H.E. Mr. Isaias Afwerki, President of the State of Eritrea.
Let me also thank and applaud Rwanda, its government and President Paul Kagame for their exemplary accomplishments. I wish as well to express profound gratitude and appreciation to President Idris Deby of the sisterly Republic of Chad for his astute leadership and commitment and for the breath of fresh air he brought to the workings of our organization by insisting on the unavoidable need for prioritization and focus.

Mr. Chairman,
As a nation born out of the struggle for self-determination, human rights and dignity, Eritrea attaches great importance to the theme selected for this year. The focus on women’s rights also coincides with Eritrea’s own vision and priorities as women were at the heart of our liberation struggle and constituted a third of our liberation army. Today they are an indefatigable force in nation building. We are hopeful that the discussion that we are having today and the activities that are undertaken throughout the year will have an impact in the enhancement of human rights in our continent.

Mr. Chairman,
The steady advancement of human rights, the whole range of them- civil, political, economic, social and cultural- is undoubtedly the cornerstone of our twin objectives of national development and continental integration. We realize that these are not goals that can be achieved in a short-period of time, but strategic objectives that require long-term commitment and sustained investment. Even then, progress will not be easy or straight forward as the experience of Africa and jolting developments in an increasingly turbulent world amply prove. It is important that this understanding informs our journey but it should not and will not deter us from forging ahead with purpose and resolve to meet the aspirations of our citizens for a life of dignity and prosperity.

Mr. Chairman,
As we reaffirm our commitment and rededicate ourselves to redouble our efforts for human rights, we, at the same time, have to intensify our struggle against the insidious politicization of human rights, in pursuit of goals that have nothing to do with human rights and are intended to undermine the sovereignty and independent development of our nations. The two tasks are indeed linked and inseparable. Many are the victims, in Africa and elsewhere, of politically-motivated demonization, of interventions carried in the name of human rights that led to the total violation of human rights and the destruction of nations. Africa’s case against the ICC is in fact based on opposition to its flagrant politicization, of its singular targeting of African nations and leaders, of its total lack of neutrality and impartiality, of its failure to uphold the cardinal principle of equality under the law.

Even as our common fight against the politicization of the ICC gathers momentum, however, we have recently witnessed a surreptitious and unprecedented move to use the UN Human Rights Council as another channel to refer African countries to the ICC, a dangerous development that must be stopped in its tracks.

Mr. Chairman,
As we in the General Assembly of the United Nations have asserted, human rights can only be served and advanced by “ensuring universality, objectivity and non-selectivity in the consideration of human rights issues, and the elimination of double standards and politicization;” by recognizing that the “promotion and protection of human rights should be based on the principles of cooperation and genuine dialogue aimed at strengthening the capacity of Member States to comply with their human rights obligations for the benefit of all human beings.”

We must insist on these cardinal principles in the face of political coercion intended to break our solidarity and pick us apart one after the other. We must firmly uphold the primacy of the Universal Periodic Review process and strenuously oppose special procedures that essentially target African and developing nations.
We also need to ensure the independence and integrity of our human rights mechanisms, including the African Commission of Human and People’s Rights by providing adequate financing and shielding them from undue influence of non-African actors and organizations.
Eritrea believes that our declaration on the theme of this Summit needs to adequately reflect these and other elements of the African common position which we have repeatedly espoused and strongly defended.

Mr. Chairman,
On the crucial issue of the rights of women, Eritrea holds that our focus must rest on ensuring the full participation of women in nation building and the economic emancipation of our nations and our continent. Clearly, no citizen can really enjoy her or his rights in a state of abject poverty and economic dependence. Education, skills development, economic empowerment, political participation and organization must therefore constitute key priorities in consolidating women’s rights. More importantly, African women must assume responsibility for their emancipation, seize their destiny and the destiny of their nations and the continent in their hands and fight alongside men for sustainable peace, genuine democracy and shared prosperity.

Mr. Chairman,
In its twenty-five years of independence and despite of the difficulties it has faced, including the continued occupation of its sovereign territories and the imposition of unjust sanctions by the UNSC, Eritrea has made significant progress in ensuring peace, stability and the harmony of society, in improving the standard of life of its citizens and in consolidating and enhancing human rights, including the rights of women, whose contribution to the nation is immense.

In conclusion, I wish to reaffirm that Eritrea remains committed to enhancing human rights through its own efforts and in cooperation with the mechanisms of the African Union and the United Nations.