Statement by H.E. Mr. Yemane Gebremeskel, Minister of Information of the State of Eritrea, At the International Conference on Eritrean Studies 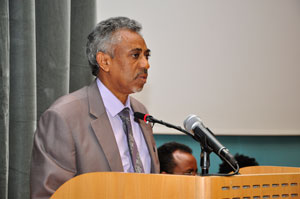 Statement by H.E. Mr. Yemane Gebremeskel, Minister of Information of the State of Eritrea, At the International Conference on Eritrean Studies 20 July 2016, Asmara.

Statement by
H.E. Mr. Yemane Gebremeskel,
Minister of Information of the State of Eritrea
At the International Conference on Eritrean Studies
20 July 2016, Asmara

Excellencies Ambassadors and Members of the Diplomatic Community

Let me first applaud the timely initiative that the Commission of Higher Education, the Center for Strategic Studies and the Research and Documentation Center have jointly taken – and the time and efforts that they have exerted –  to organize this important International Conference on Eritrean Studies.  I also wish to express our gratitude to the United Nations Development Programme for its co-sponsorship of, and invaluable support to, the whole endeavour.

The importance of indigenous research in all areas of relevance, and, its positive correlation to the challenges and exigencies of national development is too evident to merit elaboration.  Indeed, in terms of foresight and political goodwill, the Government of Eritrea has since long recognized the pivotal role of research in its developmental efforts.   Sectoral research was in fact duly incorporated as a critical pillar of government activity in the four core functions of every Ministry during the first, far-reaching, public sector restructuring that occurred in 1997, relatively soon after independence.

The nascent institutions of tertiary education in the country have, for their part, embarked on structured and thematic research in the past few years as part and parcel of their overarching academic work.  Moreover, coordination meetings were launched several times in the past few years to chart out the modalities and protocols of joint research between government Ministries and affiliated Colleges.  This effort was underpinned by the mutual recognition of their overlapping mandates on human resource development and in order to leverage and optimize the potential for synergy.

All these commendable efforts may not have yielded, as yet, robust results.  But they have been critical in conveying and crystallizing strong statements of policy and good will.  In reality, competing demands and other pressing priorities as well as lack of resources and appropriate institutions have meant that the pace of research work and achievements gleaned to-date – both within government and at the level of higher education – have remained very modest indeed.

In this perspective, the International Conference today can be seen as a trail blazer to set the tone and expand the scope of relevant research that can accrue meaningful dividends to the country’s development challenges.   This conference can also serve as a catalyst for enhancing collaborative networking and structured ties between research work in government bodies, the institutions of tertiary education in the country, academicians in the Diaspora as well as research partners abroad.   Appropriate mechanisms of collaboration can hopefully be mapped out in the course of this Conference.

In addition to heralding the launching of a multi-layered partnership and networking for pro-active, positive and forward-looking research work, this conference might also serve as a platform to challenge and refute entrenched and utterly negative narratives on Eritrea peddled these days almost routinely, not only by mainstream media, but also, by reputable academic circles and research centers.   The dominant external narrative or portrayal of Eritrea these days is atrociously out of sync with the reality in the county.   It is also extensive and intrusive in scope to literally vilify and denigrate all facets and aspects of Eritrean life.  If one browses Google Alert, as I do, each day, 95% of what is printed on Eritrea is simply preposterous.

Some of the daily invective on Eritrea borders on the mundane and ludicrous.  Few months back, a fabricated news story on a supposedly “Mufti-ordained, and government sanctioned” mandatory law forcing all Eritrean men to marry two wives or face harsh imprisonment went viral within minutes of its release, both in the mainstream media and the tabloid press, without minimal effort of verification. This is perhaps the lighter, less obnoxious, side of a dogged disinformation campaign.  The vitriol on more serious issues and events in Eritrea and doomsday scenarios churned out intermittently is simply astounding.  And as I pointed out earlier, even prestigious academic journals and think thanks, with few exceptions, are equally culpable for gratuitous misrepresentation of facts and events in Eritrea in their periodic and ostensibly “authoritative”, analytical reports.

In this context, this conference and the eventual publication of its proceedings could arguably contribute to the dissemination of an alternative and balanced narrative on Eritrea.  But we cannot harbor unrealistic expectations.  This will probably remain a remote possibility or conjecture that must be tempered by a heavy dose of realism as the issue has never been lack or dearth of factual and credible information.

The wholesale demonization of Eritrea in fact stems from an entrenched and sinister political agenda that contains in its tool box intricate and interlinked instruments of subversion  – from open instigation of war and conflict to the negative use of soft or so-called smart power to whitewash aggression and compromise the fundamental rights of the Eritrean people.  The unwarranted sanctions imposed against Eritrea since 2009, the ongoing harassment of Eritrea at the UN Human Rights Council in Geneva are part and parcel of this complex jigsaw.  And, as long as they last, these agendas cannot possibly be sustained and seen as tenable without the constant barrage of negative news on Eritrea.

Let me now revert to and address – in a broad-brush, skeletal manner – our economic development challenges and prospects as well as government policy precepts and approaches.

•    Economic growth in the past few years has not been as rapid as Eritrea’s potential suggests due to the war and associated externalities.

•    In the circumstances, Government policy for economic growth and social justice under this adverse operating climate has hinged on four pillars: i) budgetary prudence and stringent prioritization of programmes; ii) judicious public/private investment on physical infrastructure; iii) focused investment for the promotion of food security in its broadest sense and iv) human capital formation.

•    Until July last year, budgetary prudence had included, among other things, a freeze in public and national service wages for almost 15 years with all the onerous obligations that this entails to all public-sector employees.  This commendable and noble culture of burden-sharing, imposed in the first place because of adverse externalities, was misconstrued by Eritrea’s detractors and even callously dubbed as “enslavement”. Now, in tandem with improved conditions and prospective economic growth, the Government has announced and is in the process of implementing a new, homogenised salary scale, with substantial, across-the-board, salary increments to all public employees; permanent civil servants as well as National Service Members.    The capital expenditure aspect of budgetary prudence has and continues to involve judicious allocation of funds to critical public investment programmes.

•    Investment in infrastructure has been prioritized in order to create a more conducive and attractive climate for foreign and domestic private investment.  But while much has been done in water infrastructure, road transport and other areas, critical bottlenecks remain in the power/energy supply sector and broad-band Internet connectivity.  Several projects to address these bottlenecks are now in the offing and will hopefully come to fruition in the short term.

•    In view of Eritrea’s ecological vulnerability, marked as it is, by erratic rainfall and cyclical droughts, promotion of food security has been pursued for the last decade or so through a two-pronged approach.  These consist of bolstering Eritrea’s water infrastructure through extensive construction of dams for large-scale irrigation schemes, and, effective intervention by the Ministry of Agriculture at the house-hold level to diversify and supplement farming output and income through support in poultry and bee-rearing, provision of selected seeds, extension services etc.  Much of these, especially the projected irrigation schemes, are at a rudimentary stage and will require time and substantial investment for effective implementation.  The major remaining challenges aside, the integrated approach has proved useful in at least partially mitigating the effects of drought in recent years.

•    On human capital formation, Government investment in education, health, potable water supply and sanitation programmes and projects have been extensive indeed.  Access to mandatory pre-high school and high-school education has quadrupled from an aggregate total of 200,000 to around 800,000 today.  Access to tertiary education has also been expanded by several fold in the past ten years.  Government capital and recurrent expenditure on education remains high as the government has not yet introduced cost recovery and/or cost sharing instruments and mechanisms.  For tertiary education, there are no tuition fees and government also covers full boarding expenses.

•    The underlying policy behind this approach is the desire to enhance a level-playing field and provide citizens with equal opportunity.  Similarly, on health, public investment has been geared towards ensuring equitable and even spatial distribution of services across the country.  The efficacy of this policy can be attested to by the considerable achievements that have been made in meeting most of the health-related MDG goals. With support from its development partners, the Government also foots the bill for free drug supply to diabetic and HIV patients as well as full, in-patient treatment, for those without income.

•    While these are some of the economic challenges that the GOE has been grappling with in the past years, the latent opportunities are vast and prospects for rapid economic growth are high indeed.  The sectors of competitive/comparative advantage are considerable and consist of mining; fisheries, tourism, port services, as well as manufacturing.

•    In mining, licenses have been granted to 16 foreign companies for precious and industrial metals.  The country has also considerable endowments in other industrial and construction materials such as cement; marble and granite as well as glass. As these investments reach production stage, revenues and other beneficial spin offs to the country are bound to increase substantially.

•    Fisheries, Tourism, port services and manufacturing are, similarly,   promising sectors that can grow and make a difference to Eritrea’s economy with public/foreign/private investment and the right mix of policies.

•    In terms of associated administrative and legal infrastructure, the government has in the past years introduced special and more competitive investment laws.  The Ministry of Justice is similarly reviewing the Commercial Code while it published last year revised Civil, Penal Codes and related procedures.  In the same vein, an appropriate body has been appointed to undertake the Constitution drafting process.

The symbiotic relationship between peace and security – in their broadest domestic, regional and international dimensions on the one hand – and economic growth and development on the other is too clear to merit explanation.  In this respect, Eritrea continues to broaden its diplomatic ties of friendship and cooperation with its development partners on the basis of fundamental principles of respect of each other’s sovereignty and political independence.  In the wider Horn of Africa Middle-Eastern region, the GOE continues to pursue its long articulated, constructive policy, anchored on the promotion of a safe and cooperative neighborhood.  This policy precept is predicated on three pillars:

o    Promotion of regional security architectures that can play a pivotal role in the prevention, management and resolution of conflicts;

o    Strict adherence to international laws and conventions of conflict settlement and associated instruments; and,

In spite of this constructive stance, Eritrea continues to face enormous external challenges in these particularly turbulent times where international relations often operate on the basis of narrow, zero-sum, considerations and calculus.   Still, notwithstanding the substantial, externally-induced, hurdles that the country has faced for the most part of its 25 years of independence, Eritrea’s achievements in various areas have been considerable indeed.  In the event, the future can only be much more promising.