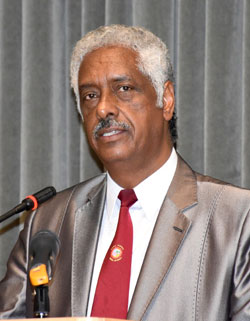 The three days International Conference on Eritrean Studies which was underway from 20 July concluded on 22 July 2016.

Asmara, 24 July 2016- The three days International Conference on Eritrean Studies which was underway from 20 July concluded on 22 July 2016.

In a remark he made during the conclusion ceremony, Professor Tadesse Mehari, Executive Director of the National Board of Higher Education underlined the ongoing conspiracies and politically motivated baseless allegations against Eritrea and expressed his expectation that the research papers presented during the 3-day conference would play a pivotal role in reflecting the correct image of Eritrea.

The participants and scholars from different countries who came to participate and to present research papers expressed that thanks to the conference and they witnessed firsthand during their stay in the country they were able to understand the true picture of Eritrea. They also expressed utmost admiration to the Eritrean government for organizing such a prolific International conference in a short period of time which is the first of its kind in Eritrea.

During the 3-day conference a number of research papers pertaining to the all-around progress registered in the historical, cultural, political and regional domains in Africa in general and Eritrea in particular were presented and discussed.

The research papers were presented by internationally renowned scholars from European, North American and African Universities as well as Eritrean scholars from the different colleges and public institutions.