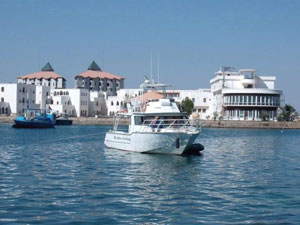 From ancient times to this day, Massawa has been an eye catching, economically and culturally, strategic city for various colonizers including Portugal, Turkey, Egypt, Britain, France, Italy, the US and Ethiopia.

Comprising two islands, two peninsulas and landlocked villages, Massawa served as the capital of Eritrea, during the early years of the Italian colonization from 1890 up to 1899. Various history books indicate that the name Massawa was derived from an Arabic word, ‘Messewa’e’. It also narrates the story of the people from Rie’si Midri, who used to scream over the sea to communicate with their counterparts in Grar, who were located a few meters, but separated by the sea. Oral traditions also say that the first dwellers of Massawa were called the ‘Massawas’, which was later adopted to Mit’siwae. On the other hand, the name Batsi’e, another name for Mit’siwae, was frequently mentioned in some Arab writtings around the 8th Century AD. Although Dahlak served as the center of coastal civilization between the 8th and the 14th Century AD after Adulis was dissolved, Massawa, with its deep sea shores and favorable docking areas started to develop as a port city from the 15th Century.

Massawa has witnessed a handful of historic junctures in its existence. This time, Massawa has various elegant and ancient buildings, which depict its historical trade and cultural connections with the rest of the world. The Mosque of ‘Asahaba’, located in the Riesi Midri area, was built in 615 AD by the followers of Mohammed who escaped persecution and brought Islam Religion to Africa through that area and is believed to be the first Mosque in the world.

In various ancient writings, the port city of Massawa is also referred as the ‘Pearl of the Red Sea’, because of its strategic location in the Red Sea. Besides, Massawa has naturally deep seashores, favorable for docking ship, calm sea territory, strategic proximity to the Mediterranean Sea and the Indian Ocean, art deco buildings, as well as variety of marine bio-diversity.

Only a few infrastructure works during the Turkish colonial era, the fortress in forto and water reservoirs and a handful of buildings were recorded. The infrastructure activities during the Egyptian colonial period (1865- 1885) was better, out of which the major ones worth mentioning are 250 meters long land bridge of Bab Ashera, as well as the 850 meters long land bridge, which connects Tiwalet and Edaga, were constructed in 1872-1873. The biggest building, which is called ‘Biete Mengisti’, was also constructed by Pasha Munzinger, the then representative of Egyptians, in Massawa.

The tomb of Sheik Mohamed Bin Ali Bin Alamin is also a very historical religious site, which was and is frequently visited by Eritreans from different corners of the country and foreigners starting from the 19th Century. Owing to its relatively favorable climate, it is said that councils from France, Britain and the Sudan used to live at Umkulu. It is also told that the first printing press and the first evangelical church in Eritrea were located in this part of the city in 1875.

Nakfa is located in the Northern part of Northern Red Sea region. Nakfa which is an icon to the Armed Struggle had witnessed the most historic and arduous military task by the EPLF. The EPLF began counter-attack in 1975 to capture the city but in 1976 a full blown out war was underway that continued for six month. After a year and a half of bloody struggle the city of Nakfa was liberated in March 23 1977.

During the tactical retreat by the EPLF Nakfa was a safe haven for the Liberation Front. Nakfa to this day still bears witness to the long kilometers of Fortresses built by the EPLF. The fortress which played host to numerous underground houses, a School, a hospital, military offices in a way that can withhold Enemy Air bombings as well as heavy artillery offences. Nakfa was so much so the strong hold and strategic place of the Eritrean Armed struggle that five of the eight military offences carried out against the Derg were initiated from there.

The EPLF in 1988 finally crushed the Derg Regime who had been deployed in the area for almost Ten years as a result, Afabet was controlled. In a continuous chain reacted events the Derg had faltered, giving way for the EPLF to launch the operation of Fenkil to liberate the Port of Massawa and pave a way for independence. The strategic and pin point plan of  the attacks proved the superiority of the Eritrean Soldier “Tegadalai” over the Derg.

Nakfa’s rich history has seen Independent Eritrea name its own currency fittingly Nakfa. So much is the history of Nakfa that the Third historical EPLF meeting was held in the Town of Nakfa in February 1994. Nakfa had celebrated its 25 years of liberation with zeal in 2002.

In 1979 the EPLF built a military fortress that covered a distance of 100 kilometer in the desert areas of Sahel, and it was in these very areas of EPLF strong hold that the Derg launched one of its biggest military operations against the EPLF, the resistance and resilience shown by the Eritrean Tegadelti displayed strength, commitment and toughness. The fortress was named according to the historical stances they represented “Taba Bluh” “Tebelahtnet” and many others are many of the well-known Military forts that saw the surrender of top Derg military officials such as Girma Tesema and many Derg Military personals.

Moments leading up to the offence Commander and leader of the Derg Regime, Colonel Mengstu Hailemariam famously and conceitedly gave his soldiers military ropes and threw a bottle filled with blood into a the ground and promised his military that the EPLF was going to break down like the blood filled bottle. Today, in the areas of Emahmime there is a place named “Taba Mengstu.” These places along with the sheer oral history that can be found from the very participants of the war are very important for upcoming generations hence they should be kept intact and passed from generation to generation as revolutionary artifacts.

The commemoration of the 30 years since the defeat of the Wiqaq-ez command and liberation of North-Easter Sahel was widely celebrated from March 21-23 in 2014 under the motto “Sahel as a nation, EPLF as Government.”

The Ghindae front extends from Ghindae to Adi Roso and Northern Red-Sea, this front holds names like ‘Enda Bumba” “Feres sege” “Gahayat” “Enda Kewhi” “Enda Harestay” “Enda Misayl” “Shndwa” e.t.c which signify the struggle’s relentless march towards Independence, the front withheld non-stop heavy military offence from the enemy from February 1990 up to May 1991, this front was used as a final frontier to completely destroy the enemy and ensure the inevitable cometh of independence.

COMESA in Eritrea: Keeping the Momentum