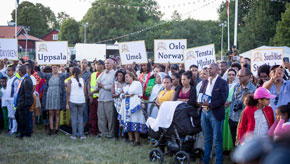 The annual Festival of Eritrean communities in Scandinavian countries was conducted with a patriotic zeal from 28 to 31 July.

Asmara, 3 August 2016 – The annual Festival of Eritrean communities in Scandinavian countries was conducted with a patriotic zeal from 28 to

The annual event in which 10,000 Eritrean citizens and friends of Eritrea took part was officially opened by Eritrea’s Foreign Minister, Mr. Osman Saleh. Various activities, including seminars, cultural shows, pavilions for children, bazaars and sports as well as general competitions were featured in the 3-day festival.

During a seminar he conducted for the participants, Foreign Minister Osman gave extensive briefing on the objective situation in the homeland

and the region. He further elaborated on the huge investment being made by the Government of Eritrea towards ensuring quality in the domain of higher education and upgrading vocational training programs so as to nurture competent youth equipped with the necessary knowledge and skills.

As regards the nation’s external relations, the Minister underscored that Eritrea has been fostering a win-win diplomatic engagement and would continue to adhere to such principle bearing in mind that relations anchored on mutual benefit are strong and sustainable.

Highlighting that the strong commitment of Eritrean citizens has been reinforced in the face of continued external hostilities, the Foreign Minister pointed out that the growing number of countries that developed clear understanding of Eritrea’s independent political path is a vivid indication of the diplomatic achievements so far registered.

Meanwhile, Mr. Osman held meetings with YPFDJ members in the Scandinavian countries as regards the contribution of the youth in national issues and the reinforcement of organizational capacity.