Festival of Eritrean communities in Canada 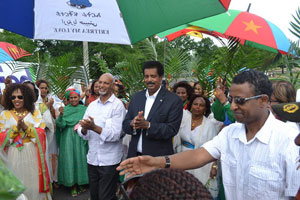 The annual Festival of Eritrean communities in Canada was conducted with patriotic zeal from 30 July to 01 August.

Asmara, 05 August 2016- The annual Festival of Eritrean communities in Canada was conducted with patriotic zeal from 30 July to 01 August.

The Festival in which Eritreans from Toronto and its environs, as well as Eritrean and friends of Eritrea from nearby cities from the US took part various activities including sports competitions, children’s programs, seminars  as well as cultural shows were featured.

Mr. Teumzgi Tesfai, the General Council at the Eritrean Embassy gave extensive briefing on the objective situation in the homeland and the region. Mr. Teumzgi in his briefing said that integrated efforts are being exerted on the part of the people and Government of Eritrea to realize sustainable economic development.

He also commended the Eritrean nationals residing in Canada for their strong participation in the national development programs and called for reinforcing participation.

Residents of Adi-Quala and Areza cultivating plots of martyrs’ families