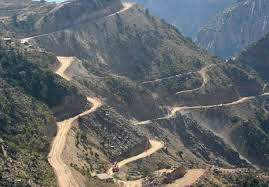 Generally in Eritrea and particularly in the NRSR, construction of asphalted roads started during the Italian colonial era. The Italian colonizers built roads, cable transport and railways that stretch from Massawa to Asmara. However, all infrastructures of transportations were destroyed by successive colonizers.  All roads inherited form colonizers were all in a shabby condition.

Since the availability of smoothly paved roads is a prerequisite for the realization of equitable development undertakings and in abridging the gap between rural and urban centers, big projects have been implemented in constructing and renovating main roads.

Some of the strategic roads constructed in the post-independence period are Serejeka-Shebah road that penetrates through the ever green areas of Semenawi Bahri and connects the NRSR with the Central region, Igila-Dehmina road, an extraordinary infrastructural accomplishment, which connects the NRSR with the Southern region and a smoothly paved dirty road that stretches from Massawa through the northern plains to Karora.  These strategic projects are major accomplishments of a quarter century of development undertakings. A network of roads that connect different parts of the region including feeder asphalted as well as dirt roads were constructed in the cities of Massawa, Ghindae, Afabet, Nakfa and  in other semi-urban centers.

Apart from the construction of roads implemented in the port city of Massawa, contraction of routes that stretch from the city center to Ghergsum and Massawa International Airport were among the remarkable undertakings.

As part of the general renovation activities carried out from 1992 to 2016, the 115 km long Asmara-Masswa road along with two bridges have been renovated.  Three precast bridges have also been constructed to ensure safe crossing for heavy load vehicles. Generally, in the independence period, around 571 km long roads have been constructed and renovated at a cost of 1.5 billion Nakfa. All the roads constructed in a period of a quarter century at huge expense and with active participation of people, members of defense forces and national companies are making due contribution to improve socioeconomic status of nationals and in the promotion of the tourism sector.

Even though commendable achievements have been registered, it should be remembered that many roads constructed during the struggle for independence and particularly in the Sahel area need to be renovated for they are the epitome of the multifaceted fortitude during the struggle and still possess a center stage in the infrastructure sector of the region.

In the NRSR, major housing projects worth close to 3.14 billion Nakfa have been implemented by national construction companies. Some of the projects have already been finalized and some are underway. Kutmia Housing Project with a capacity of accommodating 536 families was completed in 2000. Another housing project in Massawa, which is under construction by Ali-Mussa Construction Company is expected to accommodate 478 families. The construction of houses for trade interactions in Gahtelay semi-urban center is also another instance of the construction activities.

As part of the efforts that have been exerted to ensure social justice, the Government of Eritrea has prioritized development of infrastructure for social services since the wake of independence. Thus, a child in Hasta has the same access to education as the one in Massawa, pregnant woman in Bada receives equal healthcare service as her counterpart in Ghinda’e, and a family in Rora has access to portable water as a family in Afabet.  The fact that all parts of the region are now able to have easy access to social services clearly shows the significance of the development activities carried out over the last 25 years.

Taking into account that educated and well-trained citizens are a requisite to the development of socioeconomic status of the people and of the country, the Government of Eritrea has since day one of independence been, engaged in the construction of new schools in areas, which were marginalized during colonization and in the construction of additional classrooms as well as renovation of schools. So far, much has been done in this sector in the past 25 years; 82 schools have been constructed and renovated by expending a total of 129.8 million Nakfa.

Installation of Hirgigo power plant is among the major projects the Government of Eritrea along with partners implemented at a total cost of 150 Million dollars. Programs mapped out to renovate and to upgrade its capacity of electricity generation are showing remarkable progress. Once the project is finalized, it is expected to bring vivid transformation in the supply of electricity.

Considering that the power plant is situated inside the region’s geographically strategic territory, the region has a lot to benefits in the future. Currently, only Massawa, Ghinda’e and Afabet sub-zone are directly connected to the power plant and the other cities and semi-urban centers of the region have a generator of their own that supply electricity for a few hours.  According to a report from Corporation of Electricity branch in Massawa, around 30% of the region’s supply of electricity is covered by the Corporation, while around 5,035,444.68 Nakfa has been spent in buying new generators for different semi-urban centers, for the regional administration and for the erection of electricity poles and lines, 400 million Nakfa was spent in expanding and upgrading the infrastructure of the Corporation of Electricity branch in Massawa.

The region’s potential for sources of renewable energy is not to be viewed lightly. Efforts are being made to exploit the potentials of renewable sources with a special focus to solar energy. In this regard, many of the social service rendering institutions in the rural areas have been powered with salary energy. Since Eritrea in general and the region in particular are highly endowed with potentials of solar energy, this source of renewable is highly reliable.

Massawa free zone is an areas where varied infrastructures have been put in place.  Large plants like plastic factory, factory for packing containers, cold stores  are now ready to offer service.

The factory of plastic pipe lines that was established in 2008 has already started production. The factory which started its activities  with the production of 6 and 10 bar pipes , begun to produce plastic joints for drip irrigation in 2011. The factory increased its production line with the importation of new machines and mixers. With such developments the factory continues to manufacture  pipes of 16 bar. Since the  factory is making due contribution in the all round national development derive, the Government is working to empower it through huge expenses in collaboration with partners.

Noting that well trained human power is highly essential towards the success of any sort of undertaking, the regional administration has in collaboration with partners provided various training courses and gave guiding orientations to administrators and staff members in all sectors. The training courses offered in the last 25 years of independence have been aimed to upgrade the know-how of all those in charge to implement projects in all sectors. Since the NRSR has a widely separated administrative areas, the trainings were provided at the central office of the regional administration. In 2011, a familiarizing program about the structures and work mandates of each sector was successfully carried out. The program was attended by a total of 117 administrators and managers form all administrative areas of the region. In addition to this, the regional administration in collaboration with the Ministry of Education provided a training that goes for about 18 months.  In the training, 136 female and 25 male students who did not score passing results in the national matriculation exam took part.

Eritrea Festival: Getting a glimpse of Eritrea’s culture