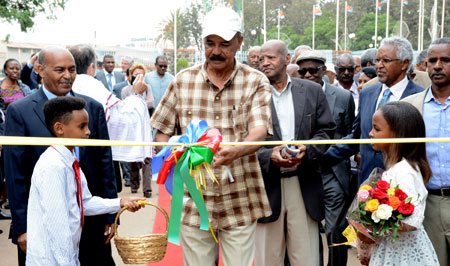 President  Isaias Afwerki has officially opened the Eritrean National Festival 2016 yesterday, 06 August,  at the Expo Grounds here in the capital.

Present on the occasion were Government and PFDJ officials, heads of National Unions and members of the Diplomatic corp.  The President observed the different sections of the Festival during which he received briefings.

The Eritrea Festival 2016 is being conducted under the theme “Festival: the Foundation of Unity and Diversity”.

In the Festival that will continue until the 14th of this month, a number of displays that highlight Eritrea’s natural and cultural resources, pavilions that reflect the cultural diversity, artistic performances, creative works and innovations as well as exhibitions of different products will be featured.

Meanwhile, in connection with the launching of this year’s Festival a cultural performances including music and dramas were staged on 05 August at Cinema Roma.

A number of participants of the festival from inside the country and abroad indicate that the Eritrean Festival creates a platform for appreciating the cultural diversity and history of of the country and thus transfer Eritrean values to generations to come.

The Eritrean Festival 2016 will remain open until the 14th of this month.