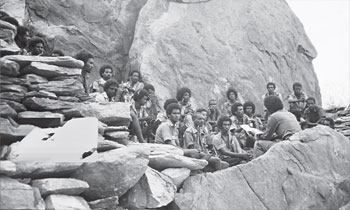 When the Turks completely controlled the shores of the Red- Sea, especially the Northern Red- Sea region including Massawa and Ghindae from 1517-1557, they initially had plans to further expand into the highlands but were defeated by Bahri Negash Isaac, thus limiting their expedition to the shores of the Red-Sea. During the early years of their colonization of Eritrea, the Turks resolved to stealing animal stocks from the locals, implemented taxation and engaged in the earliest form of human trafficking. Soon enough, the first colonizers started receiving resistance from the locals, according to a book written by Alamin Mohammed Seid, Chief Village leaders and Sheiks of Massawa and Ghindae, started voicing their complaints to their Turkish representatives and administrations.

1885-1888 was an era in which Eritreans experienced constant invasion and raids from Tigray warlords. As a solution to these inhumane acts, the locals started voicing their concerns through their very own religious leaders and at times resorted to resolute resistance, the month 1888 war of Alad Mabele by the Saho locals, which led to the killing of many Tigray invaders can be cited as an example.

The brutality and injustice that came with Italian colonization from the early 1869 up to 1941 had a tremendous impact on the Eritrean people. The divide and conquer tactics used by the Italian Colonists gave the Eritrean people more reasons to unite as a nation and forge a united resistance against racist enemy. The racial discrimination plans practiced by the Italians were somewhat foiled when 12 prisoners among which were the instigators Ali Osman and Mohamed Buri, managed to escape from the Island prison of Nakura, after having killed one guard and held another one hostage.

After many wars against Italy, Great Britain finally managed to control most of Eritrea, which put Eritrea under the so called British Military Administration. The British also continued the policy of divide and conquer that was systematically implemented by their predecessors. The people of Eritrea unhappy with the constant injustice laid upon them, in 1941 started Political Movements to voice their concerns. “Mahber Fikri Hager” was the first ever Eritrean Political Movement created in 1941thereafter the number of Eritrean Political Movement increased dramatically, and “Mahber Hbret” Hbret Mis Ethiopia ”“Eritra Ni Eritrawyan “Alrabita Al Eslamiya” Qrat Naxnet were among the most prominent movements created in the 1940’s.

Just like in all of Eritrean regions, political movements were also beginning to emerge in Northern Red-Sea region, part of the reason that compelled the surfacing of such political movement was BMA’s systematic dismantling of Massawa’s state of the art industrial complexes, the African Cement Factory, the world’s longest cable transport installations, as well as mobile jetty for ship docking. They were subsequently sold for cheap prices abroad.

As Eritrea was later unjustly federated with Ethiopia without the consent and regard of the so many Eritrean movements, the people of Eritrea did not have an alternative but to resort to armed struggle as it became clear that a peaceful means of attaining independence was no longer an option. During the reign of Emperor Haile Selasie, the Northern Red-Sea region at large was heavily involved in starting the armed struggle either through sending their local men to join the struggle or providing logistical support such as food and medicines. As a result, hoping to sever the link between the people and the struggle, the region was frequently bombarded, looted, burned and its local residents slaughtered by the Emperor’s military. Suspected villages such as Aylet, Gumhot, Weqiro were completely destroyed by the enemy giving the locals more reasons to join the ever growing and increasingly popular armed struggle.

In 1970’s, the Eritrean Struggle started to gain momentum as recruits and military logistics with the already well organized and warfare tactics it mastered enabled it to have an advantage over the enemy. Over time, the Ethiopian empire was overthrown by its own Military and its Emperor killed. Ethiopia became a socialist republic under military control, led by Colonel Mengstu Hailemariam. The Derg from the very start stated that it only needed Eritrea’s land, not its people. The EPLF well aware of these remarks urged its people in Eritrea and Diaspora to organize, unite, and fight against the enemy. In 1977, when the Derg received heavy financial and military support from the Soviets, the EPLF made a decision to strategically retreat from all the liberated Eritrean cities to re-organize and foil the vast enemy offensive. After the strategic retreat, the Derg decided to burn different villages in the Northern Red-Sea. Hrgigo, Emberemi, Erafayle, Harena Island, Shi’eb and many others were utterly devastated by the atrocious actions of the enemy. Similarly, thousands of innocent civilians including women and children were summarily murdered.

EPLF held its First Organizational Congress in Fah in 1977 followed by its second in Ararb in 1987. These were held in order to strengthen EPLF’s organizational and economic structure as well as its political and military activities.

Accordingly, due to the strong organizational structure of the front from 1970’s to 1991 numerous political awareness campaigns, cultural shows by Keyahti-Embaba, the Revolutionary School, campaigns to eradicate illiteracy were carried out successfully. As a result, many youth joined the front, the people started to organize in units to contribute to the struggle in every possible way, both financially or materially.

In addition, academic lessons, political education, summer afforestation programs, were among the day to day activities carried out by the EPLF. Moreover, the front trained cadres and soldiers from 1-22 rounds and had them dispersed among the population in order to raise their political awareness and active participation in the ongoing struggle.

The people’s front was later turned into a government in1994 and as such it continued its political activities within the population and veterans. This was continued through sub clusters and organized units within the mass. Political activities were carried out accordingly through education, seminars, written documents, and cultural shows; this was also done in the Northern Red-Sea region. This region had its own central PFDJ administration office which consisted of a chairman, managers of political activities, unit activities, administration and finance. Furthermore, these administration offices were extended to 10 sub-zones as a result of this wide spread re-organization.

The 1993 referendum can be seen as a historical moment in the Eritrean struggle, as it re-affirmed that independence was achieved by defeating the enemy. The Transitional Government of Eritrea played a critical role in legitimizing the wishes of the Eritrean people to the world through a referendum. When the ballots were counted, 99.8% of the Eritrea population voted for independence.

With the sovereignty of Eritrea legitimized, in 1994, the EPLF held its Third Organizational Congress in Nakfa, a town which served as a heart of the Eritrean armed struggle, and also located in the Northern Red Sea region. As a result, the EPLF which was responsible for the total liberation of Eritrea became the Government of the State of Eritrea.

Eritrean Festival: A framed chronicle of the actual Eritrea