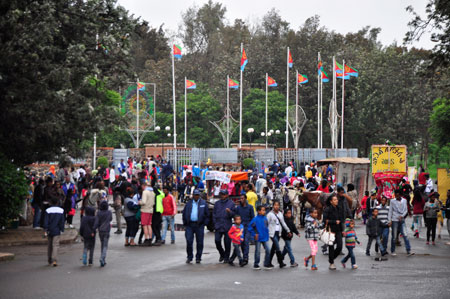 The Festival in Asmara, as part of the country’s culture, aims at celebrating the rich Eritrean heritage and underscoring the importance in preserving it for generations to come. Accordingly, with its long history of struggle, Eritrea has managed to gain its independence by bringing a people of diverse religions and ethnic backgrounds together under one umbrella. Even after independence, the question of social harmony continues to be a salient issue, thus, making the national festival one instrument, among many to highlight one of the six basic principles enshrined in the National Charter (1994) known as Cultural Revival.

The principle states, “Drawing on our rich cultural heritage and on the progressive values we developed during the liberation struggle, to develop an Eritrean culture characterized by love of country, respect for humanity, solidarity between men and women, love of truth and justice, respect for law, hard work, self-confidence, self-reliance, open mindedness and inventiveness” (EPLF/PFDJ 1994).

Hence, the Eritrean festival is an important occasion that brings together all layers of society, to enrich the country’s diverse culture and values. The festival is also an opportunity for the young and old to learn and raise their awareness of ongoing development projects, investments, engagement and promotion of creativity at the innovation corner as well as bringing parents and children to the education section, where they can learn about the use of the internet, free digital library among other activities. Certainly, the festival can’t be complete without the colorful food and beverage corners and the open air concerts that allow young promising artists to share the stage with Eritrean legends to entertain the public with drama and musical performances.

Under the theme of ‘Festival: The Foundation of Unity and Diversity’, this year’s ten day- festival had added feature with the regions’ exhibitions that promoted and unveiled Eritrea’s resources, tourist attractions and their respective socio-economic development. Needless to say, the regional exhibitions attracted numerous visitors. Despite the heavy rains this year, once one enters the hall reserved to the regions’ exhibitions, one can’t help but be amazed by the diversity and creativity of each stands displayed.

The Northern Red Sea Region exhibited its different development sites such as the Hirgigo power plant, its historical sites and heritages such as the Al-Sahaba Mosque considered to be the first mosque in Africa, and best it be forgotten the symbol of Eritrea’s resistance, the town of Nakfa. The Southern Red Sea region also colorfully displayed its natural resources and gave visitors a sense of real voyage by placing the sand of the coastline on the floor while a young woman from the afar ethnic group proudly went through each item that was displayed. The Southern region also proudly showed off its agricultural resources and production while beautifully decorating its area with large paintings representing the archeological artifacts of Qohaito and the iconic Baobabs of Segeneiti. The production of fruits, vegetables in Alaa, the multiple grains which grow around the region of Mendefera all the way to Adi Quala and not failing to mention the poultry and livestock production such as the famously known Azieb Poultry farming. The tour continued with the Anseba region and its prototype water dam and its abundant fruits production as well as posters showing the diverse ethnic groups living in harmony.

The Gash Barka region, a region where the mining and energy sectors of development are undertaken, also decided to highlight its tourist attraction, particularly the Elephant Corridor. This safe haven for wild animals, covering an area from the Gash-Setit River towards Barentu has been established by the Ministry of Agriculture in partnership with the administration of the region.

This year’s most striking exhibition is surely the Central region corner. Indeed, upon the entrance of the hall, every visitor is stricken by the beautifully human-sized display of Asmara architectural heritage. For this reason, let’s focus on this specific part of the exhibition which can be described as unique and very timely.

As one knows, Asmara, the capital city has been a giant laboratory for architects and urban designers during the time of the Italian colonization. In fact, Asmara the heritage in terms of its architecture is often portrayed as the ‘Modern African City’ or the new Rome of Africa. The exhibition of Asmara architectural beauty and uniqueness show the willingness by both the authorities as well as the organizers to preserve the city’s historical heritage, promote tourism and consequently contribute to the economic development of the country. The creativity of the organizers is, without a doubt, impressive. As a matter of fact, replicas of each of the main historical buildings true to their original forms with a background of gigantic paintings and of the wall and roof of Cinema Asmara as well as the Fiat Tagliero building constructed in 1938 in a futuristic style, allowed visitors to immerse into Asmara’s architecture. The visual effects of such artistic exhibition was mesmerizing and impressive.

At the hall of Expo, organizers managed to depict the beauty of Asmara’s architecture by integrating history into their presentations through the different replications. One can see the development from the cluster of villages, known as ‘agdo’, 100 years before and the growth towards a modernist capital by 1930s. It was a period where already major developments of houses and monuments by the Italians could be witnessed, followed by modern day Asmara and its expansion to accommodate the over 70,000 Italians settlers in the city at that time.

Children, youth, elders were all carefully listening to each presentation while reading the detailed information about each building while some tried to guess the identity and location of the building is represented. By focusing mostly on its architectural heritage, the central region aims at raising awareness among its general public on the preservation of the heritage by ensuring respect for the environment as well as its sanitation, as Asmara is often seen as one of the hygienic capital city in Africa. As such, many architects, tourists, photographers have been impressed by the quality and beauty of its architecture. Surely, UNESCO fealty aware of Asmara’s architectural importance has stated; “Asmara represents perhaps the most concentrated and intact assemblage of Modernist architecture anywhere in the world” (UNESCO 2016).

Accordingly, starting in 1997, a strategic plan was established by the Government of Eritrea in collaboration with the World Bank. Subsequently, the Conservation of Artifacts and Rehabilitation Project (CARP) was, then, established followed by the Asmara Heritage Project Office in 2014 under the premises of the administration of the Central region.

The architecture of Asmara continued to expand into European style and became one of the most modern cities in the African continent by 1940. From art deco buildings such as Cinema Impero, or the so-called ‘Novecento’ style of the 1920s, such as the building of Bar Sofya and some buildings around the grand mosque. The Gothic style of the former Governor’s Palace and the Post Office enshrined into a neo-classic style or the neo-Baroque one of the Asmara University Testing Centre built in 1915 and the Cinema Asmara, formerly known as the Asmara Theatre, built in 1920 in which the front face was added in 1937 in both Romanesque and eclectic styles. Surely, raising awareness to the public through such well-organized exhibition can only benefit the work of Asmara Heritage Project (AHP) and to engage the society in the conservation of historical heritages.

As a result, a new legislation and convention for the safeguarding of the intangible cultural heritage in Eritrea was passed in 2015. Additionally information and data on 4300 historical buildings, 257 roads and 38 public parks were collected. As Engineer Abraham —– explained, the “aim of this exhibition is to show the public how hundred years ago, architects were in advance in terms of creativity and urban planning, and in today’s Eritrea, we should learn from the past and preserve it”. Besides, Asmara was also known as a modern city at that time because of its sanitation and modern drainage systems to meet the four principles of a modern city; living, working, recreation and transport (M&G Africa, 2016).

Clearly, the exhibition is an eye opener plus a reminder of Eritrea’s rich heritage. Further to this, the ability of the architects of that time in designing buildings by adding local building techniques deserve to be acknowledged such as the Orthodox Church Enda Maryam built in 1938/1939. As Dr. Edward Denison, co-author of Asmara: Africa’s Secret Modernist City (2003), an independent architectural, urban and cultural specialist, stressed, “many of the structures were built using local materials, local workers, with parts of them inspired by local techniques” (M&G Africa, 2016). In other words, Asmara of the past won’t be viable without the inspiration of its local dwellers and local traditions.

With an immense banner encrypted, “Cultural Heritage: Our Identity”, the Central region made the message clear in this year’s festival and is consistent with Eritrea’s application to the UNESCO World Heritage submitted on February, 1st 2016, at UNESCO’s Headquarters in Paris, as well as its participation in the 40th session of UNESCO World Heritage Committee, in Istanbul, last July 2016. In actual facts, 9 natural, 16 cultural, 4 mixed sites have been nominated for examination this year. The UNESCO World Heritage Center will also inspect the conservation of 198 existing world heritage sites and 48 other sites. Surely, the high potential for Asmara to become a UNESCO’s World Heritage site will allow the administration of the Central region to assist residents and the municipality in ensuring that the architecture and urban environment are preserved in line with the capital city development needs to build and renovate while boosting its tourism and investment.

Awareness raising, timely, eye catching… are words which can describe the artwork of the stand of the Central region at this year’s Festival, a job well done!