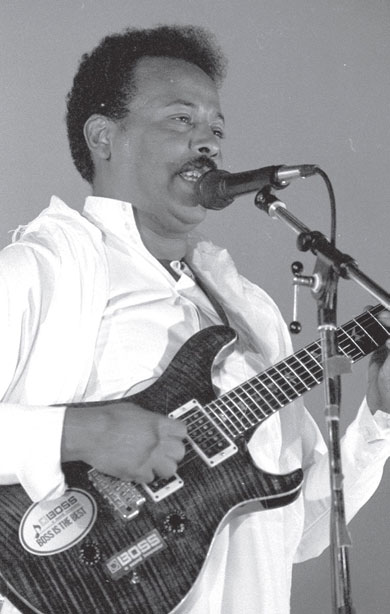 There is this song that celebrates a ‘joyous love’ and it is very commonly sang in weddings, so much so, that I can dare to say it has become some sort of taboo for the marrying couple to slice the cake prior to a dance, to this song. The song is called ‘Saba Sabina’ and it belongs to a legend in the Eritrean music: Engineer Asgedom Weldemichael. He is also the very legend behind magical sounds of his guitar’s strings, which we all know of! His legend goes back to the 1970’s; time of history when national chronicle was being made into celestial melodies, so mighty and so heavenly, that have withstood the winds of time while preserving their magnificence up to present day. It is my greatest honor to share with you the Q&A I had with Engineer Asgedom.


Let’s start with the nowadays wedding anthem: ‘Saba Sabina’. Tell us something about the song please.

My early days as a singer debuted in clubs where we performed in bands, and during those days there was this pretty lady that frequented our gigs. I somehow got that to know her name was Saba, followed by an evening where while I was on stage, she came to dance. So, just like a good young man, I bravely, and honestly, just subconsciously came up with spontaneous lyrics on the spot, only for this girl. The lyrics and the melody are simple and not elaborate; they were unrehearsed and unplanned at that, prompting the rest of the band to follow my key; the song expresses my shyness in revealing my feelings.

Where is the girl now?

I don’t know. That was the last time I ever saw her. The next day I moved out of Addis Ababa to work, and that was my last encounter with the main charachter of that song.

Wow what a story! Should we now do a small introduction about you?

With pleasure. I was born in 1947 in Asmara. At six years old I went to Mendefera because my father was working with *Sattaio, the only bus company of the time. I stayed there through elementary school, then moved to Dubarwa where I completed junior school and then moved to Adi Uguri, Mendefera for high school, I was actually one of the first batch to graduate from the high school.

I then conducted my university studies in Addis Ababa and graduated in 1971. My very first job was in Asela, Ethiopia, with an agricultural development unit.
You know how things were back then; there was this burning fervor amongst the youth for liberty so I joined the Eritrean Liberation front in 1977, I went to the field where I stayed for two years. I then went to Kasala, Sudan, and later settled in Jeddah, for 36 years now.

How did you get into music?

While I was studying in Debarewa, my father was appointed chief of Sefea town. My brother got married around that time in the summer, and for that occasion I went to Adi- Felesti, my father’s hometown. There I got introduced to the kirar, you know, in occasion like this the krar would be just hanging for everyone to play and cheer up the mood in the honeymooner’s place. I picked the Kirar every time I could and practiced a lot.

In ninth grade I suddenly was in to arts and I joined the school’s art group for acting and more activities. We had American teachers and they appreciated my skills with Kirar and ultimately they taught me how to play the guitar.

In tenth grade my father found out that I was doing music, and just like I had feared, he did not like it. The administrator of the school Mr. Asir was a real good man, I actually owe him for all the things I to achieve later in my life; he convinced my father to just let me be.

The next day my father went to Asmara and bought me a box guitar. “Prof. Asir says it’s good for you”, he told me while handing the instrument over to me, which I never let go of it ever since.

Nevertheless, even when I grew up, my father did not like the fact that I played music in Suwa places (bars).
Dawit Yifru a good friend of mine, was a student in the music department of Kedamawi Hailesilasie School of Arts he played the piano, together we enjoyed playing and making music.
That is actually when I started working with professionals and eventually started making songs of my own.

If I am to talk of my artistry I’d say that this was the time in which I swiftly recorded 7 or 8 songs, one after another.

But generally speaking, the youth back then, were something else. We were all politically conscious. Any artist like myself were closely and secretly involved in the national cause. I am taking about extremely powerful melodies and lyrics that resembled the storms of our passion, desire and a shared dream.

All of the renowned singers of Eritrea, somehow started their stardom in Asmara but for me Asmara was just a transition place, I am more of a “Mendeferino” than an “Asmarino”, as it is commonly used.

Singing for me was not similar nor easier than others, because I was actually based in Addis Ababa, so I was always on the wanted list and when in 1977 things looked dangerous for me I went to the field.

But then again, back then, anyone could be killed at any time for the sole “crime” of being Eritrean. So the youth were enraged to madness; so many just kept flooding to the fields to join the liberation front. Youth left from colleges, universities and high schools, leaving behind professions, families and more… In those days none of that mattered to anyone.

Why do many people say that the songs your generations made were some sort of an awareness raising campaign for the youth to join hands in the liberation movement?

I don’t know, so I can’t explain. But for a fact we did sing with our hearts. Moreover, youth back then were highly conscious and alert in a holistic approach. It was an accepted norm and a mature decision for young people to join the national cause.

It is common knowledge that songs have that power of penetrating deep in the heart. Our lyrics were highly metaphorical and concealed with meanings that made valuable sense exclusive to Eritreans. So the songs back then did not tell a stranger’s story, they were a narration of our own account.

Most of them were melancholic love songs; we all had a ‘lost love of a life time’, only that way could we ever escape being prisoned, tortured or killed even, for our songs.

It’s interesting how you said that it was mature for young people to go to the field.

Yes, it was common for teenagers and youngsters of early twenties to go join the front. We hated the atrocity and we were all highly disgusted and fed up!
My peers and I, we were young maybe in our early 20’s and not more than 23 years old, but very aware and mature. We spent day and night thinking of making ourselves useful and looking for ways to contribute in every possible way needed.

Who are some of the legends you worked closely with in your early days?

For me, they were friends more than coworkers. Bereket Mengistaab was working in Kahaz Theater, and his 1973 hit song ‘Meley’ was a phenomenon.
Yemane Barya was a hero in Asmara, people loved him for his generosity as he was an extremely altruistic person. He actually helped people get out of the country and settle in safer places with documents he forged. At the same time his artistry was beyond ordinary, I mean, his songs have young fans; as young as you and even younger! He was highly patriotic… he was just great!

I worked with Alamin as well, his song *‘tsebhi tsom’ was a huge hit back then. Wedi Gebru was shedding emotions of all kinds with ‘Ruba Anseba’ (River Anseba) and Alamin Aburahim’s ‘Ab Gezana Zelekum Seb Kiray’ (the tenants of our house) was a provocative power.

We all were almost of the same age, with the only difference of them debuting a bit earlier while I was still a university student.
These are amazing works and amazing partners I had. With Yemane Barya we even recorded a whole album of mine in my house in Jeddah. Besides it is just not easy to sing there, it is not allowed, so we had to be careful and yet we were recording all of our songs over there.

AUTHOR’S NOTE [*‘tsebhi tsom’. ‘Tsebhi’ is the Eritrean typical dish, a soup made with highly nutritious ingredients full of proteins. ‘Tsom’ on the other hands means fasting and during fasting seasons those luxuries are not allowed, hence the food, is scanty. The song is a contrast, mirroring the inequity of those days.]

Preforming for the people

In 1985 we organized a band called ‘Dahai’ and we made video recordings, sort of today’s video clips, that were being played in the fields, in Khartoum, Bologna and other places where Eritreans lived.
We also were engaged in making countless of tours.

Memories from the tours

I remember of the time when we went to newly liberated Massawa. It was particularly very emotional for me, because Massawa was totally destroyed, while blood and carcasses of Derg soldiers were scattered everywhere. It was a horrifying scene that I can’t forget even to this day!

Voting according to the people’s choice, because their favorite should be my favorite too, then it’s ‘Guma Hamra Lamey’ (Guma my colored cow). The Cow is portrayed as a domestic household animal, and it is a metaphor for the country and the people.
AUTHOR’S TRANSLATION OF THE SONG: Guma my colored cow

When autumn is through and it is summer
When there is no green for you and you frail
Blood sucking leaches lapping in your veins
So much so, giving you my blood became my prayer

Many people are asking me to revise the old songs for remakes. They suggest we should record our classic songs as to reach a standard that is able to sustain the ‘modernity’ that is being attributed to nowadays song making. I really hope we can achieve that as soon possible.
I dearly want to thank today’s singer artists, and I want to remind the concerned institution or whoever it is, to take good care of them and encourage them because they deserve it. And truth be told, they are the ones who are responsible for representing Eritrea’s artistry and it’s the public responsibility to encourage their endeavor.

Thank you for your time sir!