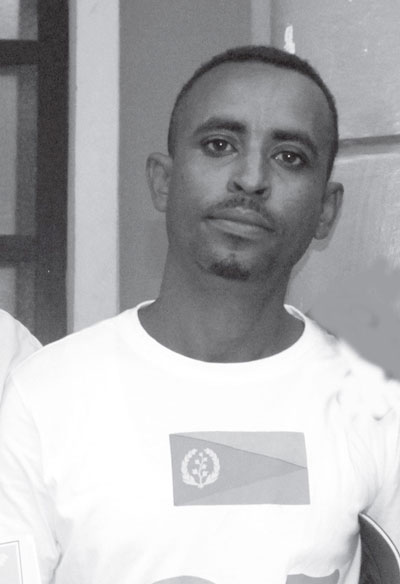 Whether to write to draw or paint, the quality of our work depends on the level of our imagination. As today’s world is transformed through the outcomes of different people’s imagination, Daniel Gezai is one of those people who is dedicated in innovating numerous things and presenting different artistic works to the public. Daniel’s ability of painting and sculpture has made him win contests besides his impressive innovations which he has been awarded numerous times. His works are believed to be a great help to the advancement of the community and the country itself. Today Q&A presents a young man who believes, he can deliver much more important works of innovation and artistic works to his people.

My name is Daniel Gezai. I was born in Suki, Sudan in 1983. I came back to my homeland in 1994 with my family. I went to Sawa with the 25th round to complete my military training and 12th grade education. Currently I am the member of the 65th Military division at the unit of information and campaigning department.

When I was a six year old kid, I used to do sculptures of different designs, using plastics and different designs on clothes. But mostly my inspirations came from my dad. He was a construction worker and a carpenter as well. So I used to excitingly watch him while he does his works. It was interesting to witness how he used the materials and different techniques. Starting from this, I was able to have my own skills and abilities.

You continued your work when you came back from Sudan?

Yes absolutely. I continued to work with continuous efforts. With the help of different talented artists and professionals, I developed my talents. Today I am one of the participants of the invention and innovations department.

What kind of woks do you do?

Starting from 2000, mostly I have been engaged in doing sculpture works and painting.

I used to be interested in painting, back when I was a boy. I used to draw different drawings using a pencil and water color. Basically, all my stimuli draws from my father, this as well is one of his many influences on me. I can recall, every day before we go to work, we used to sketch the works to be done in a form of a drawing. As I started to get used to drawing and I wanted to be a better painter. So that could be why drawing and painting became my hobby on the way.

How good are you?

I can exactly translate a person’s look to another paper one to one a 100% and same goes for sculpture.

Have you taken courses….

No. It is something I perfected through years of experience and reading, which my parents had a massive part on. They really did supported me and my hobbies. My mother used to get me the materials I needed, for both painting and sculpture. As for my father, he is a great help and support for me and I wouldn’t be where I am today without him. He is a great support for me to be a better painter and sculpture as well as joining the invention and innovation department.

Yes. I presented a painting called “ Hagerey Silimatey” meaning “My country My pride” in 2000 at the National Festival. The painting was awarded 4th place. Again at same event, I presented a sculpture which represented peace. That sculpture was awarded 1st place. It was one of my best works. Afterwards, I presented an invention, which is a hearing-aid, which can help those who have hearing problems, and I was awarded first place for it.

Something about the invention Hearing-aid…

I referred a lot of physics books. The hearing-aid is created with a purpose to help those who have hearing problems. It transmits voice through making it louder. It can be tied at the waist and put the earphone of the hearing-aid at one ear.

It takes up to 1.5 vol. It has a material that can amplify voices that is called PNP TRANSSITER 108 capacity. The voice amplifying process works with all the other technological materials like receptor, ceramic, capacitors.

Does it only serve the people with hearing problems?

No, absolutely not. Anyone can use it. Because it can transmit voices 150meters far, it is can also be used for other reasons such as security and what not.

Explosive device finder and a car that can move with a remote control in 2004, airplanes radar in 2007 which President Issaias Afewerki awarded me for, RF transmitter which can be used for a third channel for Eri Tv in 2010, in 1999 an explosive, and in 2001 radio….

Yes, I made it with from a red phosphorus, goat’s disposal, and sculpture din

It is something that makes the explosive explode fast or late.

References for the idea…

How did you come up to work on this robot?

You see, the advanced countries are using robots to do different jobs at factories, hospitals and other different firms. Considering their role, I just thought, why can’t we, also use robots too easy up certain jobs in the service sector. As a result, I started researching and started to work on it which was a very successful assignment for me.

What did you use in the making process?

Every mechanical electronics imaginable, mechanical gears, radio signal for the transmission of messages, RF for the transmission of voice and pictures, camera which has a laser rays called infrared to be used in dark, microphone, speaker, bazar which makes a long far voice near, LDR which detects if its day time or night. For instance if it is at night time or dark, the robot flashes a light.

Did you present it for the first time?

People appreciated it. As the matter of fact, different institutions have order to have the robot made for them. Plus, it is this year’s national festival innovations and inventors competition winner.

Yes. Challenges are part of life, but you just have to face them head on first. So, of course I had to face challenges on the working process, shortage of time and financial problems are part of the challenges you face as an inventor. But it is not something I couldn’t handle.

Shall I ask about your personal life?

Of course. Not only married but I am a proud father of four. By the way I would really like to thank my wife for everything.

I plan to further develop this robot and distribute it to numerous schools in our country. I feel like it can do a great help in the education advancement.

I am greatfull for my parents and wife. I would like to thank head of the 65 division Colonel Gebrezgiher Unquai (Wedi Unquai). To the administrator of the sub zone of Golij, and Gash-Barka region as well. But most of all, to the one who has helped me financially and morally Mr. Omer Mohammed, I would like to thank him from the bottom of my heart.