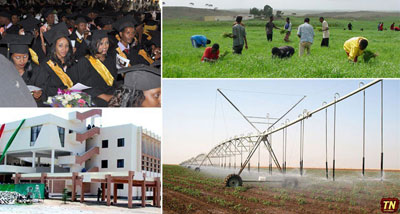 There is increasing evidence and recognition that what matters for development, more than natural resources and man-made physical capital, is the capability of people to be an effective and productive economic agents, in short, human capital. In the particular case of agriculture, most studies on the subject establish that the education and skills farmers are significant factors in explaining the inter-farm and inter-country differences in agricultural performance, although more conventional factors such as availability of land and water resources, inputs, credit, etc. should be taken into account.

With the shrinking of per capita agricultural resources following demographic growth, with the agricultural labour force in the developing countries projected to continue at positive growth rates and with the share of young people in the total also continuing to grow, the task of upgrading the literacy, skills and other capabilities of the agricultural people is enormous, for coping with both the increases in numbers and the backlog inherited from the past. Moreover, the increasingly binding character of natural resource scarcities imposes severe limits on the extent to which production increases can be had through expansion of extensive agriculture. The generation and diffusion of technology and management capabilities for more intensive and modernized agriculture become imperative. This can only be achieved through the upgrading of the quality of human resources employed in agriculture.

Agriculture has been the cornerstone of the Eritrean economy in the past and is still the main source of income and food for more than 60 percent of the population. Eritrea has substantial and varied natural resources that can be developed to sustain socioeconomic development. Generally, Eritrea possesses modest land and water resources. An estimated 2.1 million ha (17% of the total land area) is land suitable for crop and horticultural production. Of this, only 0.6 million hectare is suitable for irrigation, while 0.5% of the total land area is forest. The rest is very marginal and barren arid land, at best suitable for browsing and grazing. Currently, about 520,000 hectares are under rain-fed agriculture, while about 40,000 hectares are under full service irrigation, and about 63,000 hectares are under drip irrigation.

Eritrea’s Agricultural policy is based on the twin pillars of modern agricultural undertakings to enhance food security in its broadest sense – to meet domestic consumption needs as well as to focus on high-yield exports – and purposeful interventions and support to individual small farmers to increase house hold income. In this sense, the economic improvement of the farming section of the society will have a corresponding effect on the development of infrastructure and services that would give them an opportunity to move up on the socio-economic ladder. (G Damr 2015.)

Thus for Eritrea’s Agricultural sector to have continuity and modernity in an ever changing world, the need to have competent experts in agriculture is a needed, more than any time in the past and as such the Ministry of Agriculture over the last quarter century of independence has been working tremendously to augment the ever growing Agricultural sector with certified Human capital.

It is noted that many dimensions of the human resources development (HRD) issue are final end-objectives of development, e.g. Literacy, better health and nutrition, etc. Although this article is concerned with policies being implemented to upgrade the quality of people to become more productive and more energetic economic agents, the need to make progress in literacy, health, nutrition, etc., as objectives in their own right, should not be lost sight of. This is important, since it implies that evaluation of returns to investment in these areas must take into account the value of improvements in literacy, etc., as increasing the welfare of individuals directly and not only indirectly through making them more productive economically. These considerations cannot but influence the criteria for making decisions concerning the allocation of scarce resources, e.g. between promoting basic education versus creation of more directly productive agricultural skills.

Basic education, often referred to as literacy and numeracy education, is the most fundamental of HRD efforts, not only as a universal right of the individual but also as the foundation for further initiative in human resource development in agriculture designed to improve agricultural production and, hence, incomes and welfare. Basic education can improve significantly the efficacy of training and agricultural extension work which in turn affect agricultural production through: (a) enhancing the productivity of inputs, including that of labour; (b) reducing the costs of acquiring and using information about production technology that can increase productive efficiency; and (c) facilitating entrepreneurship and responses to changing market conditions and technological developments (Schultz, 1988). The relationship between education and agricultural development cuts both ways and the two are mutually reinforcing, with demand for schooling rising as rural incomes increase.

Agricultural extension “assists farm people, through educational procedures, in improving farming methods and techniques, increasing production efficiency and income, bettering their levels of living and lifting the social and educational standards of rural life” (FAO, 1984a). Publicly supported agricultural extension services for farm people are an innovation of the twentieth century.

This HRD innovation in agriculture has been spreading in recent years. Out of 198 extension organizations in 115 countries which provided reports to FAO in 1989, only 10 percent had been established before 1920, while 50 percent had been established after 1970 (Swanson et al., 1990). The increasing adoption of organized extension services in the developing countries reflects the realization of their importance for agricultural development and appreciation of the high rates of economic returns that have been demonstrated by the experience of countries where extension has been properly delivered.

The amount and quality of trained technical and professional manpower in agriculture are critical factors, both in agricultural development and more general HRD. This “human capital” is relatively scarce because training takes years and is costly. However, investing in technical and professional education has a high multiplier effect when trained personnel are properly employed as extension agents, trainers, researchers, programme managers, policy makers and in the private sector.

Although many developing countries still have serious shortages of trained manpower in fields related to agriculture, by contrast considerable progress has been made during the last 25 years in Eritrea.

Systematic training, planning and management by making the best utilization of resources available within the country has helped in bringing about desirable changes in knowledge and upgrade skills of extension functionaries associated with the process of agriculture development. A training infrastructure has been created to meet the training requirements of all levels of agriculture. Looking into the importance of training in capacity building of experts and farmers, this scheme is selected for the strengthening of extension services and dissemination of agricultural technology to the farming community.

As such the Ministry of Agriculture over the last quarter of century has provided the appropriate trainings to its employees. In a factual manner, the Ministry has given short training courses to 17,658 personnel’s from the year 1992 to 2016. More importantly in the last 24 years the Ministry also had given trainings to almost 300,000 farmers, of whom 110,000 were women.

Moreover, the HRD division of the ministry had provided training to its nationwide stuff of 17,000 while also creating the chance to send about 2000 individuals to other countries to further develop their educational capacity in the field. Furthermore, the ministry had given courses to members of the ministry, courses that were completed over a long period of time. As such the Ministry had graduated 13 staff members with Certificate, another 63 with diploma, while 59 and 97 respectively with First Degree and third Degree courses.
This courses which had been conferred to different segments of the Agricultural sectors saw, trainings in General Agriculture, Fishery, Horticulture, Administration of Natural resources, Agricultural administration and finance, animal husbandry and agricultural extension, among many others.

The public research extension systems have played a major role in increasing agricultural production. In order to achieve such objectives seminars, workshops, training programmes & field demonstration to selected local farmers; presentation of awards for their agricultural activities to the farmers, printing & publishing of literature and procurement of extension aids were included in this project.

The project targets Eritrea’s agricultural techniques. Production and research extension teams are working closely with farmers to select and test crop and livestock varieties, cultural practices, and natural resource management approaches that will boost agricultural production. Its focus is to overcome some of the constraints facing agriculture in Eritrea. In addition to the lack of human resources, there are few crop varieties that are resistant to drought, pests and disease, not enough knowledge about natural resource management practices, and a lack of improved livestock breeds. Also, much of the land is degraded because of poor practices and growing population pressure.

Nonetheless, building capacity and skills takes time and entails some sacrifices. At least a quarter of the ministry’s management staff is undergoing some sort of training at any given time, which sharply reduces human resources available for the ministry’s day-to-day work. However, the sacrifice is worth it.

In addition, Eritrea’s Hamelmalo College of Agriculture is one of the most vital and active contributors to this HRD. Accordingly, necessary reorientation and adjustments have been made to avoid duplication across faculties. Additionally, the courses have been structured, the research programmes have been revamped and surplus staff redeployed to enhance efficiency of inputs and effectiveness of their output.

Hamelmalo is designed in a way to build local capacity and help make people and institutions self-reliant. Eritreans like to lean with as little as possible outside help. They won their war of virtually single-handedly against a far mightier military machine backed alternately by the United States or the Soviet Union, and are in no way possible going to rely on the outside world to develop its Agricultural sector. Self-reliance has to be an outcome of self-taught process and development.

Nonetheless, the major problems of developing countries in the area of agricultural education and training as they face the new century include inadequate institutional capacity, relatively low level of public support to agricultural education, and limited resources and experience to cope with new areas of training in agriculture, i.e. environment and natural resource management, biotechnology, farming systems management and agribusiness.

Finally, Eritrea’s Agricultural sector is very critical to its national developmental plans, ensuring Food security as well as consolidating the domestic consumption needs while yielding positive economic income from the sector remains priority of the ministry and the Government of Eritrea. Hence Eritrea’s Human resource development in the sector needs continuous efforts and capital investment to further grow and clear a path way towards a modernized Agricultural practice.