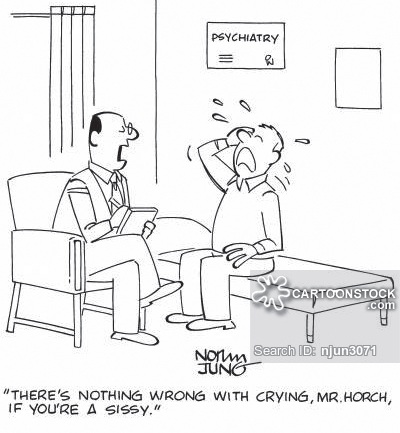 When we were young we were not supposed to cry under pain. Crying was meant for girls and sissy. Stoic fortitude under pain was the mark of manhood.

Once upon a time, quite young, we were playing bad guys and cops when the boy next to me was hit by a big stone on the head. He didn’t cry at first. The rule was there. But then he ran his fingers through his hair and felt something wet. Blood! It was then that he began to cry and wail.

“Shut up stupid! You are not supposed to cry!”

“Shut up yourself!” the boy replied. “I will cry my heart out!”

And he continued to cry until his mother arrived and slugged him for being a crybaby.

“If you cry like that again, you are not my son,” she said. “I will not tell your father this time, but if you do that again, you will live to regret it.” And through all that, the kid’s head was covered with blood.

I remember one time when I went visiting a village with a relative who was here from England. Never was he in Eritrea before. Once we got to the village we all sat down for coffee. A sprightly lady in her eighties brewed coffee. “She poured it in small handless porcelain cups. When she handed the cup containing the overheated coffee to the guest, the latter was unable to hold it with his fingers and dropped it.

“Iba! (Cow Dung)” shouted the lady. The word iba is used in Tigrignya to denote a combination of clumsiness and weakness. The old lady thought that one had to suffer in silence and not show it in public. But my friend thought otherwise. What is the use of burning one’s fingers for nothing?

That’s why there are so many people in our country who have never been to a doctor. They fell the pain in their stomach or liver, but they think that to go to the doctore with a chest or kidney compliant is like a child running to his mother to tell her about a black eye or a broken nose sustained in a neighborhood fight. Don’t surrender to pain is the principle.

“What’s wrong with your hand?” inquired the health officer, who was recently promoted from dresser.

“I was bitten by a snake,” said the man.

“How long a go?” asked the health officer with long experience among peasants.

“A week or so ago,” replied the strange man matter of factly.

The next day, I went to the clinic to inquire after the man’s health. The health officer told me that he had referred the man to the hospital. Gangrened arm has no use but to be amputated and thrown away.

“Villagers are like that,” he said. “They consider urgent visit to a clinic as a sign of cowardice and prefer to keep their atrocious pain to themselves.”
I have seen people carried to the hospital on a traditional stretcher because they refused to see the doctor on time.

There are two kinds of pain: mental and physical. The common example of unbearable physical pain is this country is toothache. It makes brave men weep and certified village heroes scurry to the nearest clinic for help. Nobody can bear the pain of an infected tooth. Yet, whimpering or whining is frowned upon by the society and is consider a sign of weakness.

Edde or Betki (good for nothing) are used to label the yellow-bellied. A real man should keep a straight face under pain and hard-ship.
How did our forefathers extract tooth from a patient before the arrival of the Italians?” I asked my Granddad.

“With coarse and primitive tools with which they used to craft household furniture.”

Most of the time, the patient with the infected tooth was held by two or three able-bodied men and the carpenter or joiner took out his tools and after much struggling and wrestling succeeded to pull out the bad tooth along with part of the gum. The gaping around then filled with soot scrapped off from a ceiling and the gushing blood stopped.
The carpenter-turned-dentist would sometimes fall backwards to the ground along with the tooth and the torn out flesh clinging to his tweezers or pincers dripping in blood.
“Thanks God!” would sigh the patient at last, relieved of his pain. What could be worse than a toothache?

“I have seen people ready to smash their jaws with a big stone in order to dislocate the painful tooth, so much were they in pain,” my Grandpa told me. The bad tooth had to go whatever the cost. But, in all this, they showed no sign of defeat under pain. They kept a straight face.

The other type of pain, i.e. the mental pain is worse than a toothache, but is dealt with the same manner as the first.

Job of the bible is the role model of our society in this respect. Once upon a time, Job, who feared God and shunned evil, got what least he expected. Not only did he lose all his children and property, but he was even struck with an abominable skin disease that kept his friends away. Instead of complaining, Job accepted his fate with resignation with unmovable faith. In the end, he got all his children and property back as a reward for his fortitude and faith.

It seems that suffering in silence is a cultural trait of our society. Ask a poor man or woman of the world or God is unjust and he will reply that he or she has nothing to complain about, that God has destined him/ her for such life on this earth and that someday, somehow, whether in this earthly plane or in the afterlife, God will repay him/her for past wrongs.

One day I went to visit a relative in his forties who suffered from bone cancer. He sat at the door of his humble house warming himself in the sun. He was the breadwinner in the family and his disease brought, as our saying goes cold winds to the house.

I told him that I felt very sorry, that it was unjust for the creator to bring such calamity upon him.

“I have lived to be 45 and I have seen the wedding of one of my daughters, and my sons are now adults…..” he said. “Things much worse than this could happen….I leave everything to God.

He died the following year. Never during all his suffering did he show any sign of grief or pain. He died like a saint.

Same goes in relationships. A broken hearted man, never cries, never shows that he has been defeated by heartless partner. If a man goes to his friends to whine about breaking up with his girlfriend, he is simply told to get over his feelings. Men would rather take their heart broken friends to a bar full of women to drink, rather than listen to a squalling man talk about his painful love stories.

Can pain be controlled? Yes. Through the mind, by the so-called mind-over-matter process or through faith. The latter is the easiest, more meaningful and durable.