Summer: A time to cherish 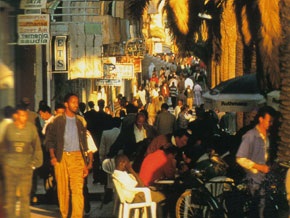 Out of the four seasons, summer in Eritrea is highly cherished as it promises a better future to the farmers through the three months long rain season which helps them determine the grains to be saved in their granaries for the rest of the year and if there is surplus to be sold and make an income. Besides, it is the season in which Eritreans from all corners of the world come to visit their families and be a part of the major annual national holiday events of their homeland including Independence Day and the Expo Festival. It is also an epic time of the year for the service industry such as hotels, restaurants, café’s, clubs and other related businesses as they become busy providing services. People travel a lot during summer especially families since it’s the only time of the year that they get together with their children.

On the other hand, summer is the busiest time of the year for people who are engaged in agricultural activities especially farming because it provides an enhanced product more than any time of the year. The green grasses with their sparkling looks provide an absolute appreciation of nature. The cold during summer mandates the increased consumption of hot drinks and the company of other fellow friends and family members.

Yet summer in Asmara has a more meaningful and different color and the experience one can get from it is a milestone for a better life. One of the most thrilling things is the return of many Eritreans living abroad for a summer vacation which makes Asmara much warmer than it already is; it feels as if the whole world is in Asmara when one hears several languages spoken down Harnet Avenue. The crowd at the Asmara Cathedral makes one confident that there is no better place than home. The difference from where people come and the religion they follow or the ideologies they prefer, suddenly vanish into thin air, and a new sense of connectedness and belongingness crawls among the entire public. Suddenly, the whole atmosphere in Asmara changes in a fraction of a second, as Asmara becomes the center stage of multiple cultures, fashion, and technology at the same time. There exists no room for ill feelings but the bursting laughter and smiles which are more radiant than the sun, the moon, and the stars combined. Longing hearts get the chance to meet their loved ones. Such moments provide a sense of excitement that no social network like Facebook, twitter, Skype and others can.

The slippery road provides drama and adventure, watching the rain in the streets of Harnet Avenue sitting from a cafeteria and sipping a hot macchiato provides a delight that is rarely enjoyed anywhere else in the world. The infrastructural beauty of Asmara proving its dominance over time still has the power to sway minds with its art deco beauty. What makes Asmara even more adventurous during the summer is that not only does it bring the rain and the climatic change but also a fruit that has managed to occupy a spot in the hearts of many people who live in as well as visit Asmara. “Beles” (prickly pear) is a fruit that grows during the summer season. It has a delicious taste with a mouth-watering juice. Many people earn a living by selling these fruit. Additionally, Beles also help cure diseases. E.g. Scientists say that it is good for the kidney because it helps metabolize food. And because the fruit grows only during the summer time, which is the only time nationals from the diaspora come to their homeland in huge numbers, the local residents refer to the people living abroad as “beles”.

One of the iconic fashions portrayed during summer is the utilization of “shida”, rubber sandals, on a daily basis especially by the Eritreans living abroad. It projects a new and

revolutionary image when worn with tight jeans, and for the first time it gains attention in the eyes of designers. A glimpse at many cities around the world is experienced with the arrival of the Eritreans from Diaspora as well, including language, fashion, music and lifestyle of the places they live in. What should not be forgotten is that the benefit is mutual; the mere existence of the Diaspora also calls the attentions of many foreigners who help in spreading information about the young prospering nation they saw in Africa.

Nevertheless, although the Eritrean culture is also one of the prime advantages of this encounter; another advantage is in the economic sector: with the arrival of the Diaspora many business institutions and households benefit financially by providing services.

The picture portrayed during the summer in Asmara shows the true nature of Eritrean hospitality and the true meaning of nationality; the sense of being proud of your nationality. The necklaces, earrings, wrist bands worn during the summer demonstrate the point mentioned above. No credential is required to identify the nationality of a person a simple smile does the trick and one can understand that the smile only comes from a person who has had a glimpse of Asmara. Competition over who serves the best among many business sectors makes Asmara more interesting and worthy of its existence. The loud music, the lights, and the wet streets with people walking up and down with a harmonious mood create a pleasant sensation and an amazement among many foreigners. The cold weather does its best to show dominance and yet people don’t mind and just enjoy the moment to its fullest.

The world has a new center for entertainment and education and yet it has never found the right direction towards it, because of many reasons, this can be seen in the expressions of many visitors who regret their late arrival and the fact that they saw its existence beauty. An amazing place for a vacation”, is the phrase which is frequently used by foreign visitors. This can be proven with the presence of the many Sudanese newlyweds who spend their honeymoon in Asmara. Humans fail to spot the best things in life even when it is in front of their eyes. They wonder across the whole universe in search of something that already is in their possession. Walking in the streets of Asmara eating fried peanuts wrapped in a paper and surrounded by palm trees glowing during the night time and dripping water from their leaves is something you would only find in Eritrea. But most of all, foreign visitors are all the time very much amazed by the calmness of the city as well as the peace and security they enjoy. Summer in Asmara paints so many pictures both to the guests and the locals. What one does with the picture is what matters because sharing is happiness. And if the current trend continues it is safe to conclude that, after few years, Asmara will be the center of vacation for the whole world.