The ‘Animal Caretakers’: The Saho of Eritrea 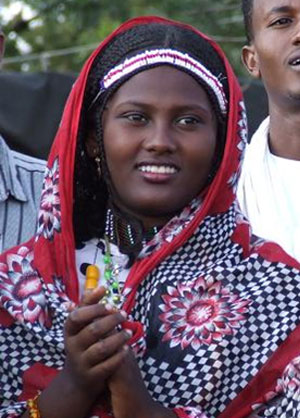 The Saho (Soho) people are an agro-pastoral and amalgamated ethno linguistic and cultural group belonging to the larger Cushitic ethnic group inhabiting the Horn of Africa. They are principally concentrated in Eritrea, with some also living in adjacent parts of Ethiopia. Ancient Saho speaking people are descendants of ancient Kushites.

The term Kushite derives from the ancient peoples of North East Africa, which started to live in this part of Africa since more than 5000 B.C., with their own culture and language.  The ancient Kushite peoples are those who spoke languages of the Kushite branch of the Afro-Asiatic (also known as Hamito-Semitic) family. They are the indigenous peoples of the present day Eritrea, Sudan, Ethiopia, Somalia and Kenya.

The word “Saho” means “nomad,” (“saa” means animals and “hoo” means caretaker), which is also an expression of their previous pastoral way of life.

In Eritrea, Saho mainly dwell in the Eastern foothills of Akele-Saho (aka Akele-guzai) and Semhar occupying 60% or more of the landmass. Sahos’ are also found intermingled amongst Tigrinia speaking populace in parts of Eritrea’s highland regions (Akeleguzai, Seraye and Hamasein). They also intermingle with Tigre speaking tribes in Lowland regions such as Barka.

Ancient Saho speaking people, as descendants of ancient Kushites, have left strong traceable evidence of their over 5000 years of rich history. The traceable evidence includes ancient rock paintings, monuments steles, ruined building, ancient pottery … etc. Some of these are found in Saho land such as in (Qohaito, Kaskase, Adulis (Adola/Ado-Lai ), Balaw Kalaw, ruins of  Matara.

According to the oral traditions, the Idda, Kabota and Asa-bora are the most ancient Saho ancestors in the current Saho region. The Saho call these three tribes the guardians of the Saho land (Badho Ambadish or Badho Sogos in Saho language).  As the oral history narrates “an Idda man married a woman from Kabota tribe and later destroyed Kabota in a bitter war, so that Idda became the dominant tribe in the region, and extended its powers up to the highlands. The Asa-bora, according to legends, are ancestors of the Minifere tribes who commonly descended from one Asa-bora woman.

Oral traditions maintain that some Saho clans came from diverse geographical origins and all adopted Saho, as their common language and all shared a common cultural heritage.  Some Saho clans affiliate their origins to Islamic dignitaries during Khilafa period including to one of the four Khalifas themselves. This should not be surprising, as well known in this region; peoples of the Horn of Africa and the Arabian Peninsula have a long history of human migration across the red sea, intermarriage, intensive linguistic, social and cultural exchange.

The people of Saho were known for their fierce opposition to any foreign invaders and colonial aggressors. Their oral history and poems tell many amazing stories of bravery and sacrifices they had offered over the last two centuries. They uncompromisingly and heroically defended their beloved land from repeated attempts of highland Abyssinian rulers to invade their land and had defeated Raas Araia and Raas Alula until the Italians invaded Eritrea in 1889.

The Saho, before the Italians’ occupation, were organized as clans, which have become federated into several major tribes. They had chiefs, their affairs being managed by councils of elders. This did not suit the Italians’ need for close control and accordingly they appointed chiefs in charge of each tribe: a measure, which made for administrative efficiency if not for popularity.

In terms of talking about their economy, the Saho are agro-pastoralists and their subsistence economy relies in livestock breeding and rain-fed agriculture, based on communal land ownership system. Prior to the Italian colonization, they secured caravan trade routes between the coasts and the highlands, which provided the clans with additional income.

As most parts of the pre-colonial Africa, land was owned commonly by the clan. It was because of this common ownership of land it was easy for colonialists to take away the land from pastoral nomads. Italians declared land owned by pastoralists as belonging to the State.

The family constitutes elementary segments in the segmentary genealogical structure. This structure taken as a whole, defines the system of rights over the land, including particularly pasturage, to which each family may lay claim by reasons of its genealogical position. The social organization of Saho is based on kinship and descent. The sub-tribes are of as genealogical branches descended from a common ancestor. They are known as Kisho, Mela, or Are. Each sub-tribe is divided into numerous kinship groups known as Dik or Abusa, which usually bears the names of individuals, the founders of the lineage. This three trips include,ASA BORA, ASAWURTA, BARADOTTA, DABRI MELA, GADAFUR, GALLE GIYA, GINNI KARA, HADO, HASABAT ARE, IDDA, IROB, KABOTA, MINIFRE, NAFEEAA, SHEIKHA, TARU3A, SAATOT, SALMUNTA, SANAFE (SAN3FE)( (Abdulkader S. Mohammed 1997: The Saho of Eritrea: Ethnic Identity and National Consciousness.)

Accordingly, the three types of land ownership, which are prevalent among Saho are: Regional land, by which people of one geographical area own the land commonly regardless

of their tribal distribution. Tribal land, which is land owned on tribal basis. Here, family has no specific rights to the land. And Family or sub-clan land, this was a land protected by specific family for grazing or shifting cultivation. (Abdulkader S. Mohammed 1997: 11)

Socio-political structure of traditional Saho society was strongly patriarchal and the roles of the grandfather and father were highly respected. The extended family had the power to control the behavior and conduct of its members, and elders were cherished as the cultural transmitters of the society. Marriage followed patterns related to the degree of family relations, and matrilateral cross-cousin marriage was strongly preferred. In the absence of formal government-supported security system, the extended family system and kinship affiliations played and continue to play an important role to support the aged, widows, and the handicapped and young people. Those who live in urban areas support their family members and kins in the countryside.

The organizing principle of Saho society was a decentralized egalitarian (acephalous) system, in which leaders of sub-tribes and clans were democratically elected for specific period of time in general meetings (rakhbe) of elders and wise men. The main responsibility of the elected leaders were securing the basic requirement of their sub-tribes and mediating and settling problems according to the customary laws.

In holy matrimony, a family who wish to secure a spouse for their children will call a meeting and discuss the issue to ensure that the spouse whom they want to choose for their family member is not introduced, pledged or promised to another family.  They try to find detailed information about the girl`s family life and gather information on her character through gossips and visits. This is done before the official negotiation takes place in order to choose a woman who will adjust to the family`s codes of behavior and to facilitate her integration into the household to avoid future tensions. The mediation is handled by the elders (shemagelle), one of whom should be the uncle of the spouse. If the two parties come into an agreement, they introduce themselves into the family of the young women. The mediators bring with them gifts such as coffee, sugar, money or wheat and give them to the family who in turn prepares food (porridge) for the guests.  After eating the meal, honey and milk are served as a sign of hospitality, then they prepare coffee and start to discuss. The Saho call this process of starting discussion “afti-fakkot”, which means “opening the mouth” to talk or discuss. All the gifts go to the mother of the fiancée (liisho), and the male family members of the couple fix the date of the marriage and discuss what contribution shall be made as dowry by the groom or the gift to be given to the bride.

Usually the marriage ceremony takes place one year after the engagement. In the rural areas, it is celebrated during the harvest seasons, whilst in the urban centres the preferred time is the summer vacation and the period before the celebration of the Ramadan.

The Saho are predominantly Muslim. A few Christians, who are also known as the Irob, live in the Tigray region of Ethiopia and the Debub Region of Eritrea.

Saho who occupy Eastern foot hills of Akeleguzai and Semhar region of Eritrea are among Eritrea’s longest-established peoples. For over three thousand years of their known history they have watched civilizations flourish and decay with their own lives. Unfortunately, no attempt has been made by Saho scholars or others to document the very rich history and culture Saho’s are endowed with. Therefore, sources regarding social structure, mode of life, history and culture of Saho are scarce.

Not only is that but today, the risk of losing oral Saho history and heritage is greater than ever. It is like watching strong winds spreading great fire with little resistance hoping that we would be left with some of our possessions. Therefore there is an urgent call for spreading awareness and a massive responsibility upon every concerned individual and every organized Saho group of the current generation, wherever they are, to collate and document their ancestors’ history, however they can.

It is acknowledged that Saho are the third largest ethnic group in Eritrea. Many Saho observers estimate Saho population as being a little over 10% of Eritrea’s inhabitants, 206,000 to be precise. The overwhelming majority of Saho inhabit Eritrea but there are Saho tribes who reside along the border areas of Eritrea and Tigrai region of Ethiopia.