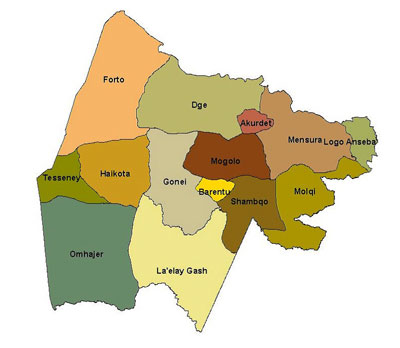 Nine ethnic groups namely the Bilen, Hidareb, Kunama, Nara, Rashaida, Soho Tigre and Tigrigna, inhabit Gash Barka Region. The Tigre and Hidareb are found in the north along the Barka River, Nara and Kunama in the middle and Tigrigna in the south and east. The Bilen and Saho are found among the Tigrigna in the south, while the Rashaida are found in the west and northwest along with the Hidareb. The Tigre and Hidareb ethnic group are basically semi-sedentary pastoralist while the remaining ethnic groups are sedentary Agro-pastoralist except the Rashaida who are mobile following their goats and actively involved in cross border trade.

In 2015 the local Government estimated the population of the Gash Barka region at 600,000. With an average size of 4.9 persons per household, 17 persons per square Km and 2.5 persons per hectare of cultivable land, zoba Gash Barka with an area of 370,000 sq. km is the largest zoba in Eritrea. Zone Gash Barka has 92.4 % of its population in rural areas deriving their livelihoods from animal and agricultural production. Based on the Socio-Economic and Production Systems Study conducted by FAO in 1998, it was estimated that 90% of the population of zoba Gash Barka as semi-sedentary pastoralists and sedentary agro-pastoralists, while 10% are engaged in other activities.

As a consequence of the 2002 border war and droughts, Gash Barka had accommodated most of the Internally Displaced Populations(IDPs), refuges returnees from the Sudan and expellees from Ethiopia. According to the Consolidated Appeal Process (CAP), of the 22 IDP and expellee camps in the country, 9 were located in Bash Barka in 2005. In these camps there were 52,732 persons accounted for 69.6% of the total number of expellees and IDPs in the country. In addition to the IDPs and expellees there are refuges who returned from the Sudan who have settled in Gash Barka.

According to the previous studies reviewed, there have been clear contributions that would help improve understanding of the livelihood systems and food insecurity in the region; however there have not been studies that aim specifically to identify the different livelihood systems. (i.e. using the conceptual framework of the Sustainable Livelihoods Analysis) in the Gash Barka region.

Generally livelihood systems are identified based on:

Based on the above review, it is found that in Gash Barka there are two major livelihood systems based on the afore mentioned criteria namely the temporarily migrating agro pastoral and sedentary agro pastoral. The main activities are pastoralism, more livestock rearing and little crop production, traditional rain fed crop production combined with livestock rearing. The urban centers like Akurdet, Barentu, Tessenay, and the major irrigation schemes of Afh-himbol, Aligider and Sawa and the numerous small scale irrigated farms along the banks of river Barka and Gash, also provide off farm employment opportunities to the communities in the nearby villages. More over several minor farmers are involved in commercial production of fruit and vegetable along the major rivers.

This livelihood system (LS) found in the drier areas of Sub-zone Dghe and Forto and extends from the northwestern parts of Sub-zone Dighe to Sub-zone Forto and northern part of Hykota (kebabi Balkai). The rainfall amount is below 300 mm per year. The inhabitants of the LS are semi sedentary households that belong to the Tigre and Hidareb ethnic groups. They reside in villages close to the cropland during rainy season. During dry season the household move to the riverbank in search of water and grazing lands. These communities depend to a large extent on livestock rearing and as their secondary source on crop production for their livelihoods. This Livelihood System is mostly vulnerable to the changing climatic conditions. The populations have very limited options for getting grazing possibilities during the dry season and they have to migrate to riverine areas and as far as Gash in search of water and grazing for their livestock. Although sales of livestock is the main source of income they do supplement it by selling mats made of doum palm leaves. Another form of farm source of income is the employment opportunities in the 149 small and large irrigated farms in Sub-zone Forto. In this livelihood system all the different vulnerable groups such as middle, poor and destitute households are represented.

The landform is made up of alluvial plains, with associated hills and valleys. Major crops that grow in these areas are sorghum and pear millet. Land is set either manually (by hoe) or camels. The livestock types that are found in these areas are cattle, sheep, goats and camels. Camels and goats dominate the livestock herd.

This livelihood system (LS) is found in the drier areas of Gash Barka along the catchments of the Barka River. It includes eastern and southern parts of Sub-Zone Dghe, Sub-Zone Akurdet and western part of Sub-Zone Mensura. The populations that are mostly Tigre belong to the Moslem faith and are semi sedentary with minor movement between up land and the riverside during dryseason and rainy season. In terms of rainfall these areas are slightly wetter than the Semi desert agro-ecological zone.
The annual rainfall varies between 300mm and 500 mm. The major source of livelihood is a combination of livestock with some agriculture but dominated by livestock. The major livestock types are goats; sheep, cattle and camels while the dominant crops are sorghum and pearl millet. Due to the availability of water in the Barka River, there are 137, and 87 investors in Sub-Zone Akurdet and Dghe respectively involved in irrigated agriculture along the banks of the Barka River. In this irrigated farms onions, vegetables, tomatoes, paper and bananas are cultivated.

These irrigation activities have created employment opportunities for the villages nearby. In addition to the income generated by sale of livestock; hand crafts (mats and brushes and raw export of the doum palm leaves to other parts of the country) made by the women folk is a source of income to the households in this livelihood. There is also cross border trade.