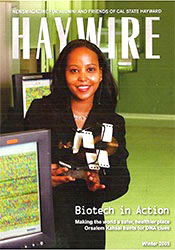 For molecular biologist and food scientist Orsalem Kahsai, nutritious food is paramount in feeding her three children. She wanted to create low sugar, healthy spreads that were high in Omega-3’s, so the development process began. Orsalem Kahsai is an Eritrean native who lives in the United States. She has very recently created and launched the first OMG FLAX Butter in 2016, thereby making huge contribution to the diet in the American society.

At age seventeen, Orsalem came to the US, and focused on science. She completed a Bachelor’s degree in microbial biotechnology from University of California-Davis, and then a Masters of Science in Molecular and Cellular Biology from California State University at Hayward. From 1998-2005, she developed as a research scientist, working for Lawrence Berkeley National Lab, in California. Her cutting-edge research, such as sequencing a human genome and studying human genetics code, has been broadly recognized and Orsalem was presented on the cover of a 2005 edition of “HAYWIRE” magazine. Since late 2005, she has been a research scientist at Fred Hutchinson Cancer Research Center, working in the division of public health science, and in the cancer prevention program.

Orsalem grew up eating flaxseed as a part of her diet. Her extensive biochemical background and knowledge of flax and the compound in flaxseed allowed her to recognize the contribution flax could make to diets. In her interview with a website called kemey.blogspot.com, Ms. Orsalem said, “I obviously took on the scientific investigation to combine ground flax seed with other nutritional ingredients. After years of research and trials resulted in my now patent pending to stabilize ground flax seed for use in products requiring long shelf life.”

In the meantime, she met her husband, got married, had three children and became the Food Scientist Mom that she now is.
Her extensive biochemical background and knowledge of flax and the compounds in flax seed allowed her to recognize the contribution flax could make to American diets. She took on the scientific investigation to combine ground flax seed with other nutritional ingredients. A special focus was to stabilize ground flax seed for use in products requiring long shelf life. Years of research and trials resulted in her now patent-pending stabilization process that allows the use of ground flaxseed in “shelf stable” products for up to a year or more.

Product development and testing continued on spreads until the launch of OMG! Flax Butter in 2016.

When looking at today’s available nutrition options, we see a hole and an opportunity to help humans to be healthier. Today’s foods are so overloaded with high saturated fats, hydrogenated oils and along with those come an abundance of Omega-6. Now moderation of healthy sources of Omega-6 is totally fine if there is also a good balance of Omega-3.
Over the course of human evolution, there has been a dramatic change in the ratio of omega-6 and omega-3 fats consumed in the diet. This change, perhaps more than any other dietary factor, has contributed to the epidemic of modern disease.

Anthropological research suggests that our hunter-gatherer ancestors consumed omega-6 and omega-3 fats in a ratio of roughly 1:1. It also indicates that both ancient and modern hunter-gatherers were free of the modern inflammatory diseases, like heart disease, cancer, and diabetes, which are the primary causes of death and morbidity today.
At the onset of the industrial revolution (about 140 years ago), there was a marked shift in the ratio of Omega-6 to Omega-3 fatty acids in the diet. Consumption of Omega-6 fats increased at the expense of Omega-3 fats. This change was due to both the discovery of the modern vegetable oil industry and the increased use of grains as feed for domestic livestock which in turn altered the fatty acid profile of meat that humans consumed.

In the U.S. the average person’s tissue concentration of highly unsaturated omega-6 fat is 75%. Since we get close to 10% of our calories from omega-6, our tissue is almost completely saturated with omega-6. This creates a very inflammatory environment and goes a long way towards explaining why 4 in 10 people who die in the U.S. each year die of heart disease.

In short, elevated Omega-6 intake is associated with an increase of all inflammatory diseases – which is to say virtually all diseases. The list includes (but is not limited to):

The world has created the nutritional decline of the human race over history of innovation. Nothing has been done much in the way of combating this epidemic; it’s rather been ignored until now. I am always driven by innovation and thus created a market first Flax butter from flaxseed.

Omega-6s and Omega-3s appear to compete with each other for space in the cell membrane and consequently for the attention of various pro- or anti-inflammatory enzymes. You can’t just take a few servings of omega-3s and expect everything to click into place like a fatty-acid Tetris game without simultaneously reducing your omega-6 intake because the existing omega-6s will bully the omega-3s away. Reducing consumption of omega-6s and implementing a healthy plant based omega source like OMG Flax Butter to get dense omega-3s will put you on a path to feeling amazing!

Ms. Orsalem says that there are three ways to fix the Problem

1. Definitely finding a product like OMG Flax Butter that is dense in omega-3s is the top choice. But you need to simultaneously reduce your intake of omega-6s. You can do this by:

*avoiding most foods that come in a box or polyethylene bags as they include foods generally made from grains chosen for their long shelf life (i.e., high concentration of unhealthy omega 6’s).

*avoiding cooking oils that are soy, corn, safflower, and cottonseed based and replace with olive oil sunflower oil. The foundation of OMG Flax butter is from sunflower as well which contains Linoleic Acid, a healthy and essential polyunsaturated fatty acid that we can all benefit from.

*avoiding the consumption of restaurant-fried food, as they’re almost always fried in unhealthy high -omega-6 cooking oils. In fact, it’s a pretty safe bet most restaurant dishes are dense in things we don’t really want in our bodies.

*choosing grass-fed and grass-finished beef. All cattle are initially grass fed before being fattened up with grains, so make sure the meat you buy is from grass-finished livestock to ensure you are consuming the healthy proteins and fats that your body needs.

2. Remember that the ratio of the two fatty acids is more important than the quantity. If you eat more omega-6s, eat more omega-3s. In other words a serving of OMG Flax Butter 3 times a day should get you into the more “balanced omega zone.”

3. Regularly get your cholesterol checked at the doctor for ongoing health screening. One test you’ll want as well is a blood test to determine your omega-6/omega-3 fatty acid ratio to determine your real risk of heart disease. It is a test that most people don’t know is available.

OMG FLAX BUTTER products have a wonderful taste with numerous health benefits. It has a patent pending nutrient extraction process to where we are able to bring the vast health benefits to the consumer in an amazing tasting spread. It can also be used as delicious alternative to other Omega-3 supplements, because all OMG FLAX BUTTER products contains 100% Daily value of Omega-3 per serving, which science has shown it may help to prevent heart disease and cancer with regular usage. OMG is low in sugar, No salt, essential Vitamins & Minerals, rich in lignans, 100% NON-GMO ingredients, No Artificial colors, No Preservative, No Trans Fats, No hydrogenated oils, so you can feel good about what you are putting in your body. OMG FLAX BUTTER Products are suitable for a lot of specialized diets. OMG FLAX BUTTER Products are also non-GMO, Gluten Free, Dairy Free, Soy Free, Kosher, and Vegan.

When asked about her future plans, Ms. Orsalem said, “I believe my unique work experiences provide me with a completely fresh perspective on nutritional foods at its molecular level. I also learned that the lack of nutrition not only affects your body’s ability to maintain itself but may also help you manage your risk for developing disease. Therefore, we are in a great demand to understand the functionality of foods due to the risk of food related illnesses such as: diabetes, obesity, cancer, cholesterol, anorexia, malnutrition… This is why after years of research and trials, I created OMG Flax Butter, and now I want you and your family to feel the best possible on a daily basis.I am consistently working with great food scientist around the globe to develop and innovate ways to deliver the best possible nutrition for humans in a delicious way. Why can’t getting healthy be enjoyable?!”