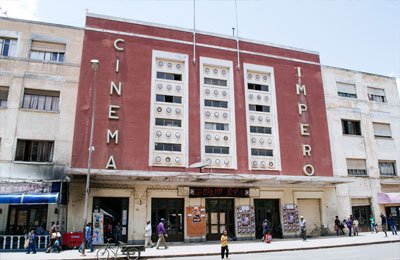 The history of cinemas in Eritrea dates back to 1920s during the Italian colonial period, when the Eritrean people were familiarized with the culture of cinemas. But not all the Eritrean citizens had the opportunity to watch movies in the cinemas which were abundant even back then. The only few privileged citizens who were allowed to watch cinemas were the ones who worked with the Italians and only with their bosses were they allowed to get in. Almost all the movies back then were Italian, especially until the early 1940s.

The construction of cinemas in Eritrea began in 1920s, where the first ones to be constructed were Cinema Emberto and Eritro. Also among the first cinemas constructed in early 1920s and still standing as one of the finest ones architecturally is Cinema Asmara, (Theatro Azmara). The cinema has a monumental architectural style with a three story classic seats. During the first decades after its construction, the cinema was used for stage drama performances and ballet shows only to be watched by the ‘first class’ Italian families.

At present, Asmara Theatre is used for rehearsals of stage dramas and other related cultural shows, but it is not functioning as cinema. The structure of the cinema and the area it is constructed on is in the main streets of Asmara, down the Harnet Avenue, which provides a beautiful scene of vintage splendor of art deco to the city.

The Italians then constructed Cinema Hamassen for the local residents. It was among the first cinemas to be constructed around the area where there was a dense population of locals. This was around 14 years after the Asmara Theatre was constructed. To this very day, Cinema Hamassen provides services for theatrical shows and movies.

Around 1940s, over 10 cinemas were constructed all over Eritrea, which makes it among the first, if not the only first one to own grand theatres in Africa. The construction work, the sophistication of the engineering as well as the interior design of each cinema, especially the big ones, have captivated the eyes of a number of tourists over the years.

Cinema Roma, Cinema Impero, Cinema Capitol as well as the Odeon Theatre are four of the biggest cinemas in Eritrea. Located in the downtown streets of the Harnet and Semaetat Avenues in Asmara, the cinemas have magnificent outer view and a state of the art interior design. The first three were constructed in 1937, while Odeon Theatre followed a year after.

Records from the Eritrean Administration of Cinemas indicate that each and every single one of the cinemas was constructed for different purposes. The only people who were allowed to watch movies at Cinema Impero and Capitol were among the first class from the colonizers, the Odeon Theatre was particularly for the officers’ class and others.

The infrastructure, electrical installation and sound system possess a world class standard to this day. Although only a few of the cinemas underwent renovation, most of them still retain the genuine beauty and system from the time of their construction. Among the few that underwent extensive renovation is Cinema Roma, but the renovators applied great ingenuity to maintain the classic and original features of the cinema.

Back during the days, the cinemas were using old equipment, which still remain and are displayed as monuments of antiquity in some of the cinemas. The 88 millimeter projectors and the fade cinema system which used real players are abundant in all the cinemas. The engraved wall sculptures, the monumental architectural design, the stairways to the first class VIP boxes and the red carpet hallways especially at Cinema Roma and the Odeon Theatre are indeed a sight to see. After all these years, the cinemas inside Asmara and some other cities of Eritrea still maintain the original designs and of course providing public services to this day.

The Soira Award goes to……