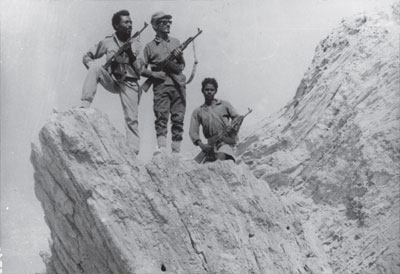 Today, as I walk the streets of Asmara, highly grateful for the nice, cool, periodic breeze, I cannot help but notice the great number of banderas (flags) waving elegantly atop city buildings, from apartment balconies, perched upon storefronts, and from streetlight fixtures. Likewise, taxicabs and merchants’ windows are adorned with stickers or posters of the red, green, blue, and gold. Today is not just another day on the calendar. It is September 1st – a national holiday, an occasion filled with patriotism and utmost pride, and amongst the most significant days for Eritreans of various ethnolinguistic or religious stripe, young or old, male or female, and in the country or across the world.

But why exactly is September 1st such an important day for Eritreans? Quite simply, it marks the beginning of the tortuous, winding, sacrifice-filled road that ultimately ended with independence and Eritreans having a bandera that they could proudly call their own. In reality, there is no May 24th without September 1st.

After all other options were exhausted, it was all that was left. Years before, on 20 September 1949, the United Nations General Assembly (UNGA) decided to send a second commission of inquiry into Eritrea to explore a potential “solution [to] the problem of Eritrea” (UNGA 1949). During the delegation’s subsequent report about their visit to the country, Sir Zafrulla, the Pakistani representative, warned, “An independent Eritrea would obviously be better able to contribute to the maintenance of peace (and security) than an Eritrea federated with Ethiopia against the true wishes of the people. To deny the people of Eritrea their elementary right to independence would be to sow the seeds of discord and create a threat in that sensitive area of the Middle East” (GAOR 1950: 346; Haile 1988: 21). How prophetic.

September 1st is a day to reflect upon and remember the monumental contributions and immensely heroic exploits of the thousands of freedom fighters – those selfless, mythical-like, legendary men and women who spent over thirty years in the barren, dusty, rocky deserts and harsh mountains of Eritrea, persevering in the face of adversity and ultimately delivering freedom against all odds.
As I walk, I think.

September 1st is about confronting adversity and overcoming it. It is about being faced with challenges or problems and persistently seeking solutions. It is about perseverance, contribution, and sacrifice.

Of all the independence movements throughout Africa in the 1900s, Eritrea’s was one of the few that emerged “victorious” via an outright military defeat of its colonial oppressor. Importantly, not only was Eritrea’s struggle the longest African independence war of the 1900s, the three-decades long struggle targeted far more than just political emancipation. Rather, it sought to usher in a complete and radical transformation of society. Powerful traditional systems of inequality and subjugation (e.g. regarding land) were targeted, with the aim of producing a more just society. As well, a vitally important dimension of the struggle, giving special attention to egalitarian, popular democratic principles and ideals, was a particular focus on women’s and gender-related issues. No longer would women be narrowly viewed as secondary, subordinate figures within society; instead, they would stand proudly as full equals to men. For example, the Eritrean People’s Liberation Front (EPLF), controlling large swathes of what was then Ethiopia, introduced an array of initiatives to abolish female genital mutilation/ cutting (FGM/C), forced marriages, bride price, child marriages, kidnappings, and dowries.

Today, although a large number of states across the Sub-Saharan Africa (SSA) and the Global South have been “politically” independent for decades, many are still mired in economic dependency and shackled by the oppressive chains of neo-colonialism. Corruption, nepotism, and theft reign, while tyranny, subjugation, persecution, and repression are all far too common. Moreover, even with an abundance of precious natural resources, many of these countries remain poor and continue to suffer from the many blights of underdevelopment. Recently, a prominent international report found that although sub-Saharan Africa receives $134bn each year in loans, foreign investment and development aid, over $192bn leaves the region (producing a massive $58bn shortfall), through tax evasion and the flight of profits earned by foreign multinational companies. Across SSA and the Global South, resources, which can and should promote development, have instead fuelled conflict and bred vast inequalities, while foreign exploitation has sustained debilitating poverty. Sadly, independence has often only translated to being in – dependence.

In contrast, however, Eritrea has taken steps to control its considerable resource endowments, firmly grasp the reins to its national and economic development, and navigate a pragmatic, peaceful path towards true national emancipation, social-based development, and a tangible, sustainable improvement in the lives of its people. For many observers, Eritrea’s approach, particularly toward aid and foreign assistance, is “unconventional” if not “misguided” or “wayward.” Specifically, Eritrea turns down aid when it does not fit the country’s needs or its capacity to use effectively. Eritrea does not reject external support – it actively welcomes it, but only when it complements the country’s own efforts. The Government has long encouraged aid that addresses specific needs which cannot be met internally, which is designed to minimize continued external support, and which complements and strengthens (instead of replacing) Eritrea’s own institutional capacity to implement projects. This approach is rooted in a strong desire to avoid the aforementioned crippling dependence that plagues many countries and to foster a clear sense of responsibility for the country’s future among all citizens.

As I sit in Shida square, I realize how it is in this context, as well, that September 1st is so very significant. Not just as the mark of the beginning of the struggle towards freedom, but also as an important reminder of the necessary continuation of work towards independence, development, and social justice. Thus, September 1st is additionally about understanding the immense example set by those before us, and striving to bring about the prosperous, harmonious nation that was sought so many years ago. Reflecting on September 1st here in Eritrea, one quickly grasps how the journey toward that vision continues.

It is apparent when visiting the numerous dams that are found across the country. Small and large, they are filled not only with the much-appreciated rains that fall from the sky, but the toil and sweat of thousands of upstanding, hard-working young men and women.

It is apparent on the long, winding paved roads, so critical for development, that connect the towns, villages, and cities. Driving along, one may overlook or not fully comprehend that these roads were not always there, their place being taken by mountains, rock, desert, and bushes. After deeper reflection, however, one may come to appreciate how these vital roads are only possible as a result, again, of the great efforts of so many who remained (and still are) dedicated and perseverant.

It is apparent also in the classrooms, in the elementary schools or institutions of higher learning, filled with young minds eager to learn and acquire the means to improve themselves and their country. As per an anecdote told to me by a proud professor with experience teaching across Africa, the West, and Eritrea,

“The students here [in Eritrea] are hungry. In other places, ten minutes prior to the end of class, papers begin to shuffle, books begin to close, bags and zippers are opened, and students’ eyes peer anxiously towards the clock. In Eritrea, however, no matter how early or late the class, the entire classroom remains utterly transfixed upon my every word and movement, right until the very last second. Not just that, even after the bell rings, they plead to forego recess in order to be able to continue the lesson!”

It was also apparent when I had the opportunity to speak with a young, recent Sawa graduate, and a nearly forty-year veteran of the independence struggle. After separately asking them each how it felt to have played such a positive role in the country, both smiled and confidently responded (nearly exactly the same), “I am not done… there are still so many things I hope to do in order to contribute to building my country.”

“Yes,” I think to myself, now traversing the narrow lanes of the shouk (marketplace), quiet today, but often buzzing with a dizzying mix of unique sights, sounds, and smells.

September 1st is about confronting adversity and overcoming it. It is about being faced with challenges or problems and persistently seeking solutions. It is about perseverance, contribution, and sacrifice.

Not just within the context of the long struggle that brought freedom, but also in terms of the ongoing work that seeks to produce a prosperous, harmonious future.