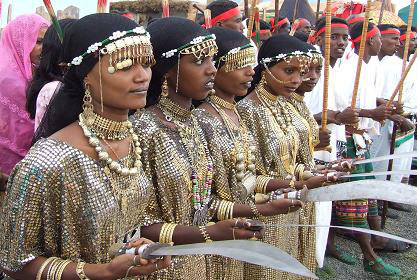 The Afar people also known as Adal, Adali, Oda’ali, Teltal and Dankali are Cushitic-nomadic people located in the East African countries of Eritrea, Djibouti, Somalia, and Ethiopia. The Afar (Danakil) claim to be descendants of Ham (Noah’s son). They are proud people, emphasizing a man’s strength and bravery. Prestige comes, as it always has, from killing one’s enemies.

The Afar people are a warrior tribe and are very good at using knives and daggers in a warfare. They love their culture and respect their laws. There is a proverb in Afar that says: (koo liih anii macinay kamol ayyo mogolla) which means “I accept you in my home as a brother but I do not accept that you put my authority questioned”.

The Afar consist of two sub-groups: the Asaemara (“red ones”), who are the more prestigious and powerful nobles living along the coast; and the Adaemara (“white ones”), who are the commoners living in the mountains and the Danakil Desert. Those who live in the desert inhabit in one of the most rugged areas in the world. One region, known as the Danakil Depression, consists of a vast plain of salt pans and active volcanoes. Much of it lies 200 feet below sea level and has daily temperatures as high as 51 degrees C. The average yearly rainfall is less than seven inches.

In Eritrea, the Afar sinhabited islands and coastal areas of the Red Sea that stretched from the northern tip of the Boori peninsula to the Djibouti border of Obock in the southern edge of the Rahayeta sultanate territory.

From the renowned Kingdom of Adal established in Rahayeta, the kingdoms of Dankali and Ankala, the Sultanate of Bidu and other major clan chieftains and sheikdoms successively dominated the traditional administration on the Red Sea coasts, in the interiors and on the islands as well. Since the 16th century, the Ottoman Turks had controlled the Red Sea coastal areas with a minimal influence over the territories. The Ottoman rule transferred its nominal authority over the coasts and islands of the Red Sea to the Egyptian Khedive in 1866 but didn’t last long. It was after only three years, on 15 November 1869, that the Ankala chiefs, Sultan Ibrahim Ahmed and Sultan Hassan Ahmed signed an agreement with Giuseppe Sapetto, representative of Societa Rubattino Company on the Nasser Majid ship, in which the future Colonia Eritrea was first conceived as the piece of land in Assab possessed by the Italian company.

Soon afterwards, on 10 March 1882, the Rubattino Company transferred all its landholdings to the Italian government and later, on 5th June 1882, the Italian King Umberto declared the land the Colonia di Assab which later grew up to Colonia Eritrea after Italian colonists had entered Asmara in 1889. Unlike its predecessors, the colonial powers of Turkey and Egypt, the Italian colony penetrated to the interior portions of the area which led them to direct confrontation with local Afar chieftains. In the late 1920s, armed resistance led by the courageous Sultan of Bidu, Yasin Haysma, became a seed for Afar nationalism planted in the minds of the Afar youth. Particularly the banner raised by an Afar nationalist Yasin Mohamoda, who was the namesake of Yasin Hysama, became a long-standing symbol of courage within Afar.

Nomadic pastoralism is the traditional form of subsistence for the Afar, although some coastal Afar are fishers. Livestock consists of goats, sheep, and camels where the terrain is suitable, and some cattle in a few places. The Afar subsist mostly on meat, both domestic and wild, and dairy products, along with agricultural products mostly obtained in trade with villagers in the Rift Valley or in the highlands.

The pastoralism of the Afar is actually closer to transhumance than to full nomadism. Transhumance is a patterned movement of people among several regularly visited locations, at least one of which is permanently occupied by a part of the population, or is improved by some structure, such as a house, corral, or storage bin. The encampments established during the seasonal migrations often consist of no more than grass lean-tos. The migrating unit has a more permanent homestead somewhere else, with larger dwelling structures surrounded by thorn-and-brush fences. Often, it is only the younger members of the group who go on the seasonal migrations; they take the more highly valued camels and cattle to higher pastures, leaving the sheep and goats in the care of the older folks at the more permanent location.

The Afar has a social organization which is similar to that of other pastoral societies in Africa such as the Somali. Central to the Afar social structure are descent and affined ties. The Afar have a patrilineal descent system based on which a person belongs to a particular clan. Afar settlements are composed of a mixture of clans although each locality is identified with a major clan and affines. According to some writers, the Afar have a saying related to intra-clan sharing behaviour: “Sagage’ri nama lakal masa” (Literally: a cow’s tail is equidistant from both its legs.) This means: Those belonging to the same group share and share equally, both the good and bad.

Hence, residents either belong to the same clan or are marital relatives.

On the other hand, parallel cousin marriages are strictly forbidden for cultural reasons. There is, of course, an explanation for this. A person cannot marry his father-brother’s daughter because ideally these children belong to one father. A Father-brother may, upon the death of father, replace the biological father and marry the widow of his deceased brother. The same applies for the mother-sister’s children. In short, father- brother and the mother-sister are potential fathers and mothers. Betrothal for marriage engagements may begin during childhood. This is done following a nominal payment in cash. The actual wedding however usually takes place when girls reach their mid teens during which there is a transfer of bride wealth.

Wedding ceremonies take place in the house of the bride’s family, where friends and relatives enjoy their porridge. Upon marriage, residence is normally patrilocal and the couple may stay there until the bride gives birth to a child. If the husband wants to take his wife, he has to pay money to the family.

This money is actually used for buying butter (subah) and wheat flour for the newly married couple. This is done on one market day (Thursdays). A few days later, the boy’s father brings two camels, loads them with the butter, wheat flour and mat (Senan) and takes the couple to the place where they will construct their own house. The wife’s mother usually accompanies the couple to help them construct their house and returns home after three days. When the wife gets pregnant, the husband usually takes her back to her family for delivery. The husband would then dismantle the mat house.

After a period of up to four months following delivery, sometimes after a whole year, the couple return to their home, which they would have to re-erect. The same procedure is commonly followed at the second and third pregnancies. Depending on the capacity and willingness of the husband to support his wife economically and socially, a wife may continue to deliver at her parents’ home even after the fourth child

The Afar social organization is highly segmented with small social units such as clans, sub-clans, lineages, and households. One of the most important traits of the Afar Ethnicity is their dance. Dance supports the important moments of life. Dance (LAALE), performed exclusively by men, or dance (MALABO), performed exclusively by women and dance (KEEKE) together men and women, for example, accompany the ceremonies of marriage. In the Afar traditional register, there are games (SAXXAQ and KASSOW), songs of praise (GAALI SAARE and FARAS SAARE) and prophetic words of the soothsayer (ADAL).

The region where the Afar live is often referred to as the Afar Triangle. The Afar are not only one of the most unique ethnic groups in Eritrea but the Horn of Africa as well. They are courageous, fierce and loyal.