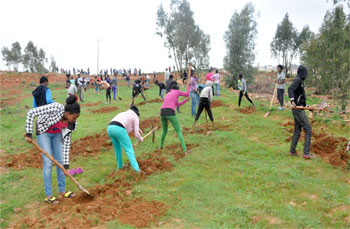 A simple compound with a bunch of flowers, leaves and a backyard with green scenery is undeniably pleasing matter for people to live comfortably and pleasurably inside their homes. The atmosphere within the compound creates a sense of peace, joy and freshness for the people living there and a simultaneous heavenly mood on earth seems to prevail. In our tradition, mothers, take the green color as a sign of harmony and say Beal Qetelya Yitaareqena, roughly translated as let the Green Fellow bestow Peace on us.

They like to have their morning coffees in greener places, and even the sight of the simplest of green places makes them wish to have and own one of kind.

When seen in a general perspective, greening campaign has a young man’s age in the history of Eritrea. Just like other country’s development programs, greening campaign has been taken as one of the developmental campaigns since the early nineties. Indeed, it is the fundamental measure for a country’s development policies. Beside the majority and overall progressive development programs, greening campaign in Eritrea takes its part in a whole annum, a deservedly task and a fine outcome each successive year. Particularly addressing, the 1994 initiated activity of summer work entitled Maetot registered an emphatic result in the country’s green surface. To overcome the bare land and make it look greenish and equally replenish the trees lost due to different reasons, this program of summer work was initiated on the national theme of “student’s campaign for development” in July 1994. Having a main target of the program of instigating a work and teamwork habit in the younger generation from their early ages and enable them to finely contribute to their country.

The program of Maetot or summer campaign was organized by sending high school students into different spots of the country throughout the completion of the campaign, necessary accommodations, starting from materials, to supplies needed by students are arranged accordingly. In earlier times, up until the year 2013 students were made to move to the different regions of the country. The years that followed however, students were placed to work in their respective regions, whilst doing their personal daily activities. The campaign naturally is a platform that embraces individuals of various cultures and diversities and enable them to exchange their own values and share their experiences as nationals. The big picture is that this gathering is the chance for these students to attain and practically demonstrate the theories they have grasped in their classes. Reports indicate that the students’ campaign for development is registering a satisfactory result in the nation and remarkably in the Maekel region. Within this region, places starting from Serejqa to Adi Akelom are a living example of the green developments, finely transformed by students, and in the sub-zone of Berik where an area named Dem Seb’ay that is entitled to five villages which are Tseazega Adi Bidel, Adi Yaqob, Hazega and Adi Qunxi, this area without considering the width it covers, it has a length of 6.8 km which was a bare land before, but now thanks to the summer campaigns persistently followed, it is a striking green landmark. Beyond this, there is also an area near Shimanugus Tahtay, a superbly cultivated by the same students’ campaign for development.

In the present year around 6807 students with their 365 instructors participated in the summer development campaigns, members of the Agricultural division and travelling physicians had also taken part. The administrative zones also participated by making their cooperation with the Education Ministry. The developmental campaign is planned in a way that would not get in the way of the students school plans, hence it is made up of each years’ current 9th and 10th grades students from all over the country, where the 11th grade students are left so as they can use the summer time to focus on getting ready for their 12th grade lessons in Sawa. The first selection factor considered is the address of the students so it becomes suitable for them without having to move longer distances to do their work. The participants of this developmental campaign, apart from what they have adopted as a work habit, they are provided a bonus of 150 Nkf for their efforts, yet irrespective of such incentives, the major thing outlined here is, the spirit the young individuals build through time, the work habit and skill they learn in the process.

Out of the total numbers of students participated in this year’s program, 88% were active in the conservation of water and soil by forming and rebuilding terraces. Many holes and seedlings were ready for next programs. In line with the green clubs already formed in all levels of schools, in winter seasons this kind of developmental campaigns are main ingredients to implement afforestation and other similar activities within their respective school backyards. Such programs are one of the main experienced programs of development where the return on investments are quite real and tangible. According to reports, in the Maekel region alone the tasks accomplished, are estimated at around 10 million Nkf. The overall campaign executed in 65 spots around 717km of spherical terracing is formed and another 128 spherical terraces were renovated.

The rich and fertile land of the country is constantly observed and protected as long as the yield is for the public it holds. Programs such as Maetot do have a priceless impact on nation building, the future holds the beauty and worth by itself and for the current moment it is not going to be termed as beauty is by the eye of the beholder because in such scenario the eye can’t help but simply wonder since the outcome will remain a public legacy.

55th Anniversary of the Armed Struggle for Independence Commemorated nationwide