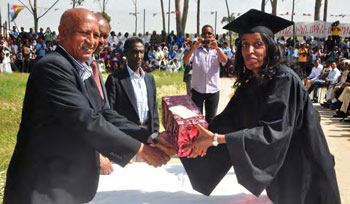 A total of 958 teachers out of whom 253 females who have been attending level upgrading summer course graduated in certificate on September 3rd 2016.

Asmara, 05 September 2016- A total of 958 teachers out of whom 253 females who have been attending level upgrading summer course graduated in certificate on September 3rd 2016.

The graduates are kindergarten, elementary and junior school teachers and are comprised from all regions of the country.

The course which was offered at Asmara Community College and College of Health Science was focused on upgrading the capacity of teachers and thus meet the existing shortage of teachers throughout the country.

In a speech he delivered during the event, Mr. Semere Rusom, the Minister of Education, pointed out that the MOE has been working around the clock to upgrade the capacity of teachers in the country and called on the graduates to uphold their responsibilities in living up to the people’s expectations.

Minister Semere also handed over prizes to the graduates who demonstrated excellence in their studies.

Meanwhile, Mr. Alem Ghebreqal, Director of the Asmara Community College indicated that new methods of selecting candidate teachers have been applied and that those who are pursuing their studies at diploma level will graduate in the near future.

The Ministry of Education has offered an opportunity for outstanding teachers to pursue their studies at diploma level, according to reports.