Our Eating Habits and Social Propriety 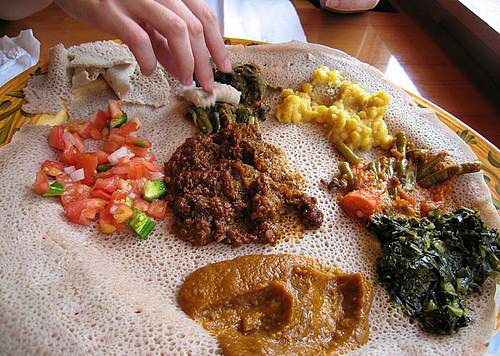 Eritreans are known for their frugality as regards eating. In our tradition, a gourmand or glutton is likened unto a hyena. And a glutton who is never satiated is likened unto a donkey which keeps eating until its belly bursts open, for according to tradition, it has no navel to act as a safety valve.

When I was young and we ate from the same plate or tray with my brothers and sisters, my mother would first communicate her wish that everyone ate from the side which was closer to him or her. There were unmarked boundaries on the big plate that only unchaste eyes failed to notice.

Taking morsels of food from beyond the confines was considered a serious transgression and punishable by a slap on the face administered by the older brother or sister. Since it is difficult to cry with your mouth full, the only thing you did was scowl in pain.

“When I was in Italy, I remember eating in a cafeteria beside a Somali who stopped eating after two or three morsels which he shoved down his gullet rather quickly.” Would start my Uncle on one of his many comical stories.

“You are going to leave all this food on the plate” would ask the people at the table with eyeballs protruding like spyglasses.

“You can take it if you want, would intone the Somali in reply amused at this primordial behaviour. It was then that my Uncle learned that there were people more frugal than Eritreans and he began to consider himself a glutton.

In traditional Eritrea, the proper way to eat injera (Pliable pancake made of Taff) and Tsebhi (Spiced and very hot meal), is to use as much as possible the minimum number of fingers only. Using the thumb, the index and the middle finger only, is a sign of finesse and good breed. The use of four fingers is again a sign of proper upbringing. Using the five fingers is okay as long as you don’t scoop up your food from the communal plate. But, scooping the food like a bulldozer and then fork lifting it to your mouth is frowned upon by the elders. Add to this the cardinal sin of chewing your food with your mouth open or still worse using the right and left set of molars for chewing, and you are identified as a public nuisance and, especially in the villages and in the old days, you were rarely invited to a wedding feast, or if they invited you, they seated you with the ruffians, scoundrels, and the unwanted elements of the village.

Now all these good habits or table manners have become thing of the past, and it is not common at present for people doing just the opposite with impunity.
One day, a lady, a bit deficient in civility, happened to be eating with the common crowd of eight people that constitute a full table in the Tigrinya culture( we use conical wicker wood for table). Go to any traditional wedding feast, and if those at the table are less than eight, they have to wait for the eighth person to arrive and join them before the usher brought the food.

This woman arrived and the magic number of eight having been completed, the food arrived and everybody began to eat. This lady, not giving a damn to culture and social propriety, stretched out her hand to eat and scooping a generous heap of food from the tray, was about to bring it to her mouth when the people around gasped in bewilderment and stopped eating and began to stare at her wondering how on earth she could shove the whole lot down her throat.

Eritrean mothers, in particular, are said to be very frugal. If they can have their morning coffee accompanied by a small piece of Kitcha (Unleavened bread), they can continue working for ten or more hours on end without food. And in order to stifle any pangs of hunger or thirst they simply gird their loins with a cummerbund, very tight.

Children who indulge in eating are told to change their manners. The shepherd, who turns down a lunch because it is not nutritive enough, is given the same dinner.
“When we were young, the family menu contained two item: the main entry (which invariably included Shiro and Hamli (Lettuce-looking herb) and a tin can full of water. But all this seems to have changed with the city dwellers. Just go to any wedding reception to verify what I am talking about.”utters My Uncle in total despair.

In the past, the wedding feast was an opportunity to display one’s refinement and good manners. The lower or baser human appetites were suppressed in favour of the nobler and dignified social manners, especially table manners.

Modern wedding reception is however a case for study for anthropologists and socio-biologists.

A week ago I was invited to a wedding reception held in a certain hotel. There, I could see men turning into wolves before my very own eyes. I have heard about men turning into werewolves at midnight in the past. But this one took place in midday. I saw a frail and shaking old man carrying a plate which he heaped with all types of meat, bones and fish from a recent visit to the banquet table from which the invited guests filled their plates. I knew that he would leave more than half of it on the plate to be discarded by the waiters later on. What a waste! The rest of their guests not to be outdone carried their overload plates to their respective tables swaggering on the way as if they had killed a lion and were displaying their trophies.

When it was my turn to help myself from the buffet, I had to scarp some pieces of bones and half burned potato chips from the big tray to fill my plate and stomach.
Eritreans seem at present to have cast injera to the winds in favour of bani(Bread rolls). Especially the daily workers have shifted to silsi(Tomato based sauce), frittata(Scrambled eggs) and fata(Silsi poured over bread crumbs) all eaten with bani. Goodbye injera, we will miss you very much!

In restaurants, most Eritreans seem to go for meat and fish and there is a tendency among those with high income to leave the assorted vegetables on the plate. A rich man is expected to eat meat and leave the veggies to the poor. Little do they know that what they have left as inedible on their plates could be their salvation as they grow old and their blood veins begin to deteriorate inviting all kinds of circulatory problems.

“On the other hand, the Ferengis (White men) prefer vegetables to meat,” intimated old man said, who is a restaurant owner.

I told him that it is a pity that our people are messing the perfect diet that could save their lives.

“Alas, they only begin to eat vegetables after visiting a doctor,” one friend added. “But most of the time it is too late.”

Add to this the appearance of bakeries that sell all types of pastry and diabetes and blood pressure, are here to stay.

Unless somehow Eritreans switch to the more healthy food common to our tradition, such as Kitcha, vegetables, and all types of foods, and drinks that are sugar and cholesterol free, things will surely turn ugly.