Eradicating Illiteracy: Reading the Past and Writing the Future! 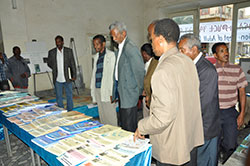 The United Nations defines illiteracy as “the inability to read and write a simple message in any language.” Let’s first understand the definition closely. An illiterate is equal to a handicapped person who is unfamiliar with his surroundings and is unable to perform day to day activities.

Literacy is a fundamental human right as well as a foundation for life-long learning and continued human capital development for inclusive and sustainable development.

Hence, literacy not only empowers individuals, families and communities, but it also reduces poverty, improves quality of life, helps to attain gender equality and ensures peace, and sustainable development.

The International Literacy Day is annually celebrated on September 8 to emphasize the importance of literacy to individuals, communities and society as a whole. It also draws the attention of the international community regarding the current status of literacy globally.

As such in Eritrea also, World Literacy Day was remembered at National conference held at the Central Region Conference hall. The Conference which had been planned for the last couple of weeks was, officially opened in the mornings of September 8th 2016. The conference which played host to all six regions found in Eritrea, was off to a bright start with the Aser cultural group opening the conference with different performances concerning the day. A little girl donning school uniform appeared in the stage and started reciting her presentation in fluent English.An evidence of Eritrea’s educational policy.

After the cultural group entertained the audience for a good half an hour, guest speaker of the day Minister Semere Russom of the Ministry Education gave an opening speech. Mr. Semere Russom on his speech outlined that Literacy had been part of the national development program of the Eritrean Government since independence. Literacy as such had been commemorated since 2002 and it is being commemorated this year for the 14th time. He further went on to add that, empowerment of Eritrean citizens through education while eradicating illiteracy through different programs such as seminars, workshops are part of the ministry’s work to promote education and its advantages at the national level.

Finally Mr. Semere called for a united effort to eradicate illiteracy once and for all and asked for the continuation and relentless effort of all experts in the field.

Literacy program in Eritrea with the full backing of different partners was launched in 1999. Since then, significant progress had been achieved and efforts were and still are being made to sustain this progress and the continuation of education of the whole country.

The Ministry of Education in its efforts to eradicate Illiteracy in Eritrea had been engaged in different programs since independence and currently the Ministry is engaged in tackling Illiteracy through the Department of Adult Education and Media, which concentrate on Adult literacy and post literacy program, contemporary Elementary Education for out of school children, continuing education program and courses, community reading rooms and vocational skill training.

Extensive reports and discussion points were forwarded in the conference by each of the six Administrative zones found in Eritrea. This year’s conference has indeed gave an overall view of the country’s illiteracy situation. What indeed has so far been accomplished towards promoting literacy in the last 25 years of Independence? What were the deficits and what has to be done so as to address the challenges? And others were some of the most important questions asked at the conference.

The mission of the campaign as stated by the Ministry is to provide and facilitate quality education and skills training opportunities for youth and adults to assist them to be productive and responsive lifelong learners.

The factors causing illiteracy vary from region to region, such as way of life and locational position. But, one of the most important factor that causes illiteracy in countries is the social issue of women education. The reason behind the progress of developing countries can be solely credited to women literacy. More literacy means more knowledgeable and skilled people in a country which is normally termed as human capital. Literacy enables a person to understand better, so they enjoy a better socio economic life and assist in the nation’s overall development.

Thus, the six regions found in Eritrea had over the last 25 years achieved commendable success in eradicating illiteracy, for instance in the Northern Red Sea, an estimated 71% literacy rate had been achieved through continuous campaigns to eradicate literacy, also in the southern Region back in 2008 literacy rate was recorded at 70.5%, that figure over the last eight years is seen to have soared to an estimated 88%, which is a clear indication of the relentless efforts carried to eradicate illiteracy.

To encourage more involvement from communities measures were adopted both in the government level along with community level; these measures included free teaching sessions, educational seminars, programs and workshops conducted by different organizations. Leadership opportunities were given introduced to create a more aware youth, fellowship and internships etc. Building of new schools and colleges in different regions is also a “confidence building mechanism” to create more awareness on the issue.

As a result about 900,000 adults were enrolled in literacy classes since 2000 with an average of 77% completion rate. Literacy rate during independence (1991) was at 20%, but within twenty four years of independence and but since independence with continuous efforts to eradicate illiteracy, access at all levels has increased tremendously. Success has been registered in the provision of educational opportunities to the disadvantaged ethnic groups and the rural areas. Similarly gender disparity has decreased to a great extent. Regions, which were deprived of educational opportunity, have been given due attention and many citizens have benefited from this engagement. Making mother tongue the medium of instruction at the elementary level has enabled not only to promote equality among all citizens but also to deliver education in the language that the students can best understand, furthermore, more than 80 community reading rooms opened as part of the Adult literacy program to enhance literacy achievements and cultivate the habit of reading and as a result of this in 2015 literacy rate was recorded at 80% (national statistics office), with is a tremendous hike when compared to 1991.

Despite the encouraging improvement in Literacy Rates, illiteracy rates are still high in many villages, especially those which are remote and nomadic areas. And the challenge of relapsing into illiteracy is greater than ever. With the continuously increasing population this would farther be exacerbated. Acute shortage of classrooms and teachers continue to affect education provision and quality. There are over 100 schools functioning under shades due to lack of normal classrooms. A lot of children demanding basic education are still withdrawing before mastering essential basic skills. There is the issue of limited human capacity to run literacy and continuing education programs effectively in various local languages, limited access and poor quality of continuing education programs persists and also there is a high literacy disparity by gender and geographical areas.

To overcome the issue of illiteracy, it is imperative that we first mold ourselves. To bring proper education for the nation building process education for all is must. Publicity for various educational institutions should be done by placing banners on the public areas, attending various seminars, door to door campaigns and explain to people how illiteracy is dangerous for their growth as well as their nation’s.

By the end of the two day conference, all regions were engaged in group discussion to discuss on how to further improve the fight against eradicating illiteracy, as such ideas were agreed on major areas of intervention such as to reinforce the implementation of literacy for out of school children, youth and adults by enhancing the ongoing literacy programs and by initiating special intervention focusing in disadvantaged areas and section of the society, provide adequate training and professional support to literacy and continuing education personnel, enhancing the existing reading rooms as part of the creation of literate environment to enhance the literacy skills acquired in literacy centers and also to cultivate the habit of reading among the population, and most of all introduce vocational skills, training programs for newly literate adults.

The uses of literacy for the exchange of knowledge are constantly evolving, along with advances in technology. From the Internet to text messaging, the ever-wider availability of communication makes for greater social and political participation. A literate community is a dynamic community, one that exchanges ideas and engages in debate. Illiteracy, however, is an obstacle to a better quality of life, and can even breed exclusion and violence.