Innovator at Heart and Mind! 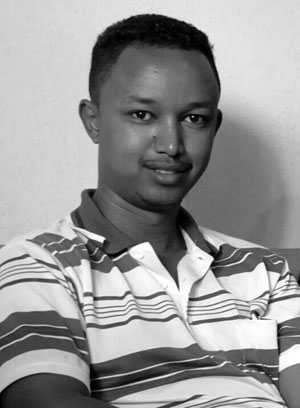 Our guest on today’s Q&A is Pityas Tsegu. A young innovator, who had the audacity to go out of his way and innovate a tricopter-drone. He is a bright young man, who from a young age aspired to excel in a field of Aeronautical Engineering. His innovation won first place at the 7th National Youth Festival held in Sawa this year.

I was a bit hyper as a kid, but good in school.

Without hesitation! My parents had always been supported me throughout my academic years, especially my mom; Almaz Kahsay, a veteran fighter. She used to help me with my school works and motivated me to read during my elementary school. The same goes for my father, he was a great help during my high school years. By the way, I would like to thank both of them.

It is a turning point for one, to change the aspect of life in every way. It is a place where one gets to grow physically and mentally. Sawa presented me with an opportunity to be successful in my academic education.

As a child I used to be interested in airplanes and how they operated. Keeping this in mind, the department of Aeronautical Engineering studies about designs of planes, whether civil or military ones. This is the department that studies their scientific operations. Hence, I thought it is just the right field for my ever growing interest and I went for it.

The theoretical courses are given by instructors in Mai-Nefhi and as for the practical courses; they are given at the air force by ground technician experts.

Yes, we had the practical courses while observing the planes physically and study the general and interior operations.

Yes of course, even though the pilot has the license to fly the plane, it’s the technician that has more knowledge about the whole mechanical aspect and structure of the plane. As such, the ability flying a plane enables him/her to maintain and repair it easily.

This also goes back to when I was in grade 11. I was fascinated when I saw my friend repairing a TV set. I wanted to know more about electronics. I was so envious that I decided to take several courses on electronics. As such right after I returned from sawa I enrolled myself into Mahta and Even vocational training center and I took a yearlong electronics training which predominantly played a huge factor in my later years study in Mai-Nefhi.

Without a doubt. The vocational training were a tremendous help. When I joined the department I was already a step ahead of my classmates and the lesson I was receiving. This ofcourse helped me score high in my GPA.

My first experience in the competition was last year. At the time, I was able to present an innovation of an autonomous robot which moves by light.

I refereed different books on micro-controller and did extensive researches on the internet to gather data.

I presented it at Asmara University in the annually held inter-collage festival. It was such a motivating event to see my work being appreciated by instructors and students of the occasion.

At home, am thinking of developing it further more and make it capable of doing certain activities. In the future I’m thinking of installing a camera in it and make it able to clean the house.

I designed it for a demonstration in my senior research at Mai-Nefhi. After decoding the program, I had the wood and some metal frames made in medeber. I completed it by assembling 3 brushless AC motors and 4 micro-controllers and it took me around a year and half to finish it.

As I told you it contains 4 micro-controllers and 2 sensors. The sensors enable the drone to read the program and fly. The drone is equipped with a camera and as it flies it can directly send video images to a computer. It is operated by a remote controller and can be controlled up to 150m with RF.

Mostly, different programming aero-dynamic physics, electronics books. Besides that, my friends who graduated in Electrical Computer Sciences had gave me, their ideas, inputs and advices.

It was two months ago, in Mai-Nefhi for my senior research project, I scored an “A”.  Also, at the 7th Youth Festival, it was the winner of the competition. I was fortunate enough to have had the chance to present my innovation to Excellency President Isaias Afwerki and other government officials. I was proud and at the same time inspired to work even harder to contribute more to this field.

We have faced minor setbacks, for instance, we were not able to have the electrical supplies we ordered from abroad in time.

Am thinking to install GPS receiver so as to control it from higher distance, also I am thinking of increasing its flight duration.

I like to watch movies and listen to music besides hanging out with my friends.

I would like to express my gratitude to my parents who helped me get to where I am today, my friends and above all the Government of Eritrea and people for their support. And I would like to stress that, it would be a great opportunity, if we would gather around and discuss ideas and share experiences as innovators. It certainly would be a great help to improve the invention and innovation sector in our country.