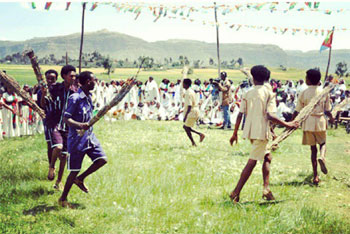 For Eritrean children, Kudus Yohanns is a par excellence. New Year means new clothes, and lots of meat to boot. And nobody cares about the calendar.

New Year resolution doesn’t exist in our culture. Here, people simply ask God to bless the New Year for plenty of food and for peace.

What makes kudus Yohanns interesting to children apart from clothes and the slaughter of a sheep or chicken is the torch-burning event conducted on the eve of the holiday known as Hoye-Hoye.

When I was a kid, we used to light a dried Kolka (cactus) or a shig (bundle of dried twigs) and go around asking for “treat or trick” just the way they do it at Halloween in America.

You go from door to door shouting hoye-hoye and reciting old chants whose origin are shrouded in mystery.

Belay o Belay, Ho in the middle of the lake,

The family that opened its door to welcome the night hollers would shell out a couple of Nakfa’s which made us very happy.

“Come on, step across the burning torch,” we would exhort the merry gentlemen. And they would step across the flaming and smoking kolkal three times forward and three times backward and would give us their blessings. But we valued their financial contribution more than their hollow blessing.

“It is not the same in the village,” objects my aunt Silas.

She told me that in the village, the “treat and trick” part is absent. There, hoye hoye has more of a spiritual and superstitious nature.

On the eve of Kuddus Yohanns, the villagers light their shig and circumambulate the village with the village church as the focal point. Then they all go to the open ground or baito in the village and build a bonfire invoking God to forgive them their sins and bless them with good harvest and a time of peace.

Krie Eleison (Have mercy on us o Lord)!

And after reciting the Abuna Zebenesemayat (the prayer) in unison, they disperse and go home. The stepping across a burning kolkal by the family is an event conducted by the members of the family and not again for money, as is done in the big Eritrean towns like Asmara.

In the village, a neighbor kid arrives with a burning torch early in the morning, get inside your home and recites the Akohkay (A bad spirit repellent invocation).

May the cooking pot for wild herb vanish.

And be replaced by a pot of buttered porridge.

Once every house is disinfected with similar recitation, you are guaranteed a year of plenty and prosperity. And the social part of the New Year celebration begins with the slaughtering of a livestock.

Rigat is a waitress in a snack bar in Asmara. She has been in the profession almost for a year. By this time she must have saved enough to go back to her home village to see her beloved parents carrying all sorts of gifts. After all, it is the New Year; and the family deserves all the respect and love any God fearing child feels appropriate to do in this special day.

So Rigat get ready to make this pilgrimage and buys sugar for the family, coffee for the addicted mother, a bottle of Areki for Daddy(they say it is good against malaria), Omo for dirty…., pair of shoe for  Senait, exercise books for Haile and Michael who are both in Grade two, and some candles for the neighbor kids.

Did she remember Addey Stehay? That old decrepit of an aunt who refused to help the family in its hours of need! Well, just to please the Almighty. A kilo of Sugar.

But Rigat pilgrimage has some ulterior motives. The gold ring and necklace she bought out of her savings and which she is now wearing, plus the blue jeans, the green t-shirt and converse shoes are meant to make a statement. Here I come my village. As for my old friends, just eat your hearts out where ever you are.

Rigat has been all her life humiliated by her village classmates. She is from a poor family. Now is the time to silence the evil whispering. She has made it!

So every New Year is a day of reckoning as far as Rigat and her past troubled life is concerned.

At the other end of Asmara lives Addey Silas, a lone wolf in her declining years. She hates small kids and is not slow at lashing out at any Array kids who dares to enter her house uninvited.

The neighborhood children are hesitant whether to visit her house or not for the traditional hoye-hoye performance.

“Do you think she will welcome us?” asks one of the kids.

“But she has a bad temper especially when she sees kids,” warns another kid.

“I know last year, after all the songs we and and the kolkal we burned, she gave us only five nakfas and to us to scram.”

So they all go to Addey Silas’s house and with their kolkal burning hot, they start to sing.

Please come out with an open hand

To reward your beloved children

Addey Silas comes out from the dark room where she usually stays hidden from curious eyes. She calls the kids to step forward and stretches an open hand.

The kids see something shimmering in her creased palm.

One of the kids with with a fearless heart goes nearer and grabs the Nakfa. He couldn’t believe his eyes.

This is Fifty Nakfa

“Go away! I don’t want to be disturbed!”

“Happy St.Johns day just the same!” shout back the kids and go back home very happy.

Eradicating Illiteracy: Reading the Past and Writing the Future!

Innovator at Heart and Mind!