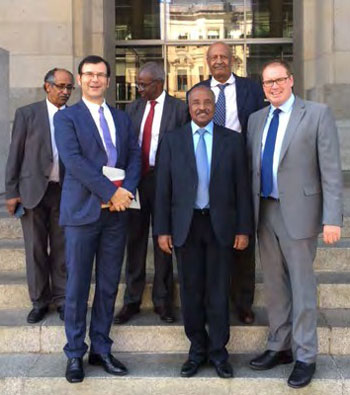 The Eritrean Government delegation held talks with the Federal Minister of Economic Cooperation and Development on mutual and bilateral relations and cooperation.

The deliberation with the members of Parliament of Germany was focused on development of mutual relations and economic cooperation.

The Eritrean delegation also held a meeting with different German officials in which they gave briefings regarding the internal and regional situations.

The visit of the high-level Eritrean delegation concluded with a signing of cooperation protocol.

The Protocol was signed by Mr. Osman Saleh, Eritrean Minister of Foreign Affairs and by Mr. Gunter Nooke, head of African Affairs at the Federal Ministry for Economic Cooperation and Development.

The meeting was in continuation of the similar meeting held in Asmara on 14 December 2015 during a visit by German delegation led by Mr. Gerd Muller, German Federal Minister for Economic Cooperation and Development.