A vivid talent in Theatrical Art 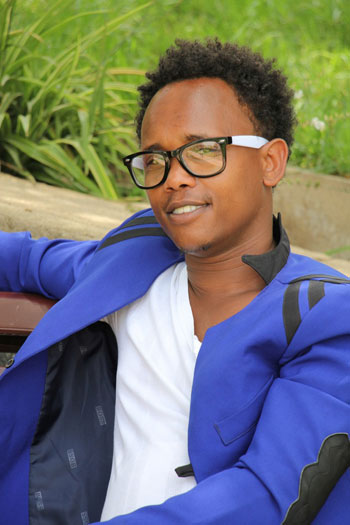 We always talk about entrepreneurs who build their dream companies and transform the life of their communities. When it comes to Theatrical Arts, we also find a massive number of hidden personalities who contribute largely to the movie production by being in the back door and in front at the same time. Merhawi Meles is a talented script writer, producer, director, and an actor. Q&A presents you the shining star who claims to have used Art as the most simple and significant mechanism for him to describe his passion.

A little about yourself.

I was born and raised in 1986 in Ethiopia. I was particularly known for my hyper behavior. I still don’t think I have changed much. I grew up with a hobby of writing stories and poems. I liked to read books since my childhood and I am regularly keen to improving my hobbies through education. Unfortunately, the field of art is not fully progressing as needed. I believe that there would be much great artistic world if we had the chance for education from the beginning. Think about it, I got my diploma in Theatrical Art after years of experience in my profession, but I know it would have been a great benefit if I had the opportunity before.

It was my elder brother Million who inspired me to become a writer. He really was a good reader and writer. He used to notice my interest in writing and motivated me. In addition, seeing people who read a lot and keep themselves updated even during the summer times, which we considered the annual school leave, inspired me the most. So, I read a lot, but I was only familiar with Ethiopian literature.

People might dream to become writers, but one way it is when you find a good writer that makes you get crazy with his works, then you may have a reason to be a writer. Everything starts from here. Plus, my elder brother used to make me and my other brother contest in writing short stories. I want to tell you a story.

Twenty years ago, I was able to win a competition of the short stories at home hosted by my elder brother. My story was awarded as it has fulfilled all the requirements, and my brother’s didn’t. The amazing thing is, no one in the house remembers my story, everyone remembers my brother’s. Even though his story didn’t follow the rules, but they all recall it until today. So it’s not about following the rules but it is coming up with a good imagination that counts, I assume.

Courses you have taken.

I know one thing, I am a good learner, I do it from my surroundings, various books, the media and others. But, back in the days when I was 13, I had an opportunity to join and work with a drama club called “Fiqri” theater. They were on their way to turn professionals, they are famous ones these days. I was able to work and learn something at the times I interacted with them. The ways of acting and directing. Moreover, I have various friends with all types of carriers. These people are the sources of my ideas. Again, just recently, I was able to receive my diploma of Theatrical Art from SMAP Institution, and I am currently pursuing into advanced diploma in directing.

Of your first movie…

I was 9th grader when I had my first movie “Zegedam”. It always brings back memories. It is a time I would never forget. When I finished the script of the movie, I was only a young boy who seemed not serious about it. I had challenging moments to convince actors and producers to actually bring my movie into scene. No one believed in me, all they saw was this young kid, besides, financial constraints were inevitable. At the time, I managed myself to work as a barber, so with the money I had saved and with different people who promised to assist me, I planned to put my ideas on ground. Everything was set. But, something happened that has crushed my heart. I couldn’t get the money I needed, and as a result everything went off. It was such a devastating moment. I was hurt to see my dreams crush down right in front of my eyes. But that moment was also a turning point in my carrier. If that hadn’t happened, I believe I wouldn’t be where I am right now career wise. I am glad those things happened. They were the stepping stone of my profession.
My first movie was finished. Tesfit Abrha, a camera man, had a right hand for the completion of the movie. Also, Shashu Tekle, an actress, inspired me to build up my strength and hold on to my dreams. With different people’s moral, I was able to finish my first movie. I just couldn’t take my eyes off the poster when it was finished. Indeed, it is one of the contributions I feel proud of.

How many movies are you involved in so far?

Eleven movies. Four movies as a screenplay writer and director, and the rest seven include my original screen play and directed all by myself, and acted in most of them.

It was a dream. As I told you, I am a good self-learner. So, I direct movies as well. To have different abilities, you need to build confidence in yourself. You have to be brave to take

whatever chance you get. That is what I did. When I think about it, even the lack of education made me step out of my comfort zone and to be creative. Directing is all about being creative. Experience is my teacher. My works are my classes as well.

Yet to come. I mean there is always something I like about each of my works, but I don’t have favorite so far.

Your specialty in action…

All works are creative, but when imagination or fantasy is added, they are greater. Having said that, it is also not good to go far from your environment. For instance, I tried to express the habit of rumor at one of my movie, “Abzeyelenalu”. In that movie I tried to add some imaginary ideas and tried to come up with my own style. Yet, I went out of the formula and rules while creating my own flavor. It was one of the movies that has great feedback from the audiences.

What are you currently involved in?

I am still writing. I am writing a short stories book. Besides acting, I am producing and directing video clips. I wish Eritrean clips take part at the East Afro clips. I hopefully make it happen. Moreover, I am working on a series movie. Optimistically, I think of coming with the second part of “Abzeyelenalu” as well.

About that….yes, people take it for granted and forget that you are just an ordinary individual. They are interested in what you do. I want pinpoint that even artists has a normal life as everyone.

I like to travel. Eritrea is a place where you can travel with just minimal expenses. It is where I enjoy my days and get my ideas while traveling and visiting places.

Tesfay Ghebreab, is one among the many people who has inspired me. His works have great value in my life.

I am thankful for everyone who has been there for me. A lot of people have helped, honestly I am the result of different people. I am a millionaire with the love I get from people, and for those who challenged me in my way of life, I love them equally as those who were good to me.

Tradition and Health: being healthy as a donkey!