Literacy and Health: A Synergy for a Healthy Society 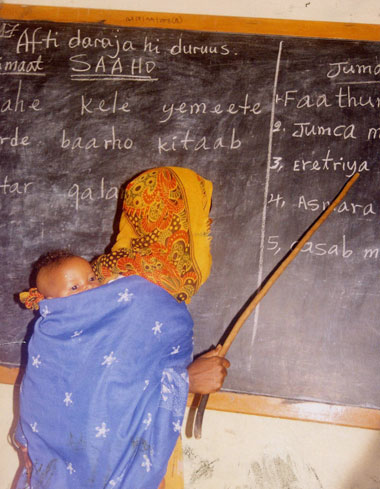 The Government of Eritrea has long recognized education, as a central element in sustainable growth, human capacity development, and nation building. Following this, the Ministry of Education is empowered to spend up to 45% of the annual national budget on education.

Having inherited a country, and particularly an educational system in ruins, the Government of Eritrea has made significant effort in developing an educational system that not only responds to geographical realities – in terms of previously marginalized communities that have had little or no access to education – but also by tailoring the coursework given to the development and nation building needs of the country at large.

Putting into account the critical mass needed to meet these extensive national needs for skilled manpower, the Government of Eritrea has consciously designed an educational system that takes into consideration its own geography and the demography by placing educational centers and colleges in different regions around the country. And adult literacy program has been among the areas in which Eritrea has been registering remarkable outcome. It is the program given due focus to ensure that it sustains without setback.

Hence, each year September 8, nternational Illiteracy Eradication Day, is commemorated nationwide. and last week the day was obeserved under the theme, “Our past as a reference for the future”. The day addressed and evaluated the illiteracy rate in Eritrea, as part of the session, and being a partaker of the Literacy and Health presentation by Dr. Mismay Ghebrehiwet made it very interesting for me. According the paper presented by Dr. Mismay, so far, problems on communicable diseases in Eritrea are showing a big decline unlike major diseases such as Cardiovascular, Diabetics, High blood pressures and many more in the world are still advancing referring the last eight years and expected to double in following years. What could be the cause? Is the most predictable question that would follow and the reason could simply be, people do not normally choose to visit health experts until they get sick. The life styles they follow makes them victims of many ailments and they end up in misery and discomfort.

Regardless of who we are, it is always advisable and effective to practice the following three prevention steps; the primary or the proactive is to always be on the safe side or conducting persistent medical checkups. As it is said in the Tigrinya saying, to make way for the floods, before the rain comes. The secondary prevention method is getting quick access to cure after you get sick (requires a least knowledge of what to do), and the third is remaining productive after even you get a chronic sicknesses.

The synchronization of the two elements (Literacy and Health) is a fundamental and most substantial for people to improve and advance, enhance their living standard, and their productivity at the end. The 1948 WHO’s Health definition goes as; a state of complete physical, mental, social wellbeing and without meaning the absence of diseases. In the mean time it was appreciated to deliver a deeper concept and simultaneously it was a bit controversial and criticizing for people to accept it fully as a definition. The controversy and criticism lies on how precise one can be to have a wholesome of physical, mental and social wellbeing, when one can even be healthy and sick at a very same moment for a reason the patient can live with the disease controlling it.

All of this leads to the understanding that health comprises a lot of concepts with in it, we don’t learn about health to just know about it but to propagate the knowledge into ourselves and stay safe, equally we don’t take lessons for just becoming familiar to education but to put it into use and improve our lives, the linkage and synching of these two matters makes it obvious that one completes the other and their presence is solely determined negatively or comes short in absence of the other and the results indicate downward effect.

An example presented on the day of Literacy conference by Dr. Mismay clearly portrays the combination. There were these four socially identical communities selected for assessment where for the first community a health service provision was made possible without education (includes all the health programs and facilities), for the second community only educational facility is provided without practical simulation (theory only and illiteracy is made to be vanished), for the third community both services were provided and the fourth community were considered as controlling room or division without intervening to the other three communities. When assessment hour was due, Life expectancy (LE) in these respective communities was taken as a judgmental criteria where upon the result of the first community when compared with the 4th indicated a 20% increase in life expectancy, took for a conclusion that health is important for increase in LE. The second community which took only educational facility registered a 30% increase in LE, takes one into conclusion of education is worth than health since it registered a higher result for LE. The third community registered 80% LE but with the shortcomings or contaminations in the second and third communities accordingly should have been 40% of LE yet beyond arithmetic calculations it went into 80%. The research straightforwardly finalizes 20% + 30% isn’t equal to 50% but 80% called Synergy. The 1st community’s power adds to the 2nd and the 2nd has its own, finally the outcome bursts.

So, Literacy and Health are complementary issues that showed a dramatic result of Synergy which goes beyond arithmetic calculations. Henceforth the final goal is set to find the more improved and interesting life of people by combining the policies, managements, procedures and programs of such concepts to yield more productivity of the community.