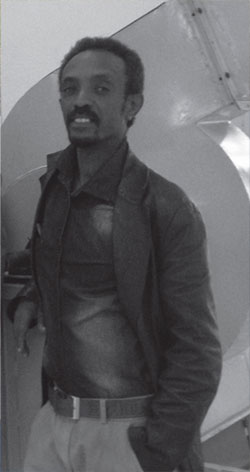 It is amazing how one’s mind can bring tangible changes to one’s environment. To have the ability to create things from scratch and to develop something valuable, makes you wonder just how the human mind works. Yonas Hadera is one who works believing that he can bring a positive difference through his different innovations. Over the years, he has been able to come up with different machines that have been put to effective use within a number of institutions. Born and raised in Asmara, Yonas has been recognized at different occasions for his brilliant innovations. Today, Eritrea Profile is proud to share Yonas Hadera’s story.

I believe that we [as a country] have the potential to produce the things that we import. We can make it here without the foreign currency or anything else. The things we think are outdated or lack value, still can be used to make something valuable. I want to locally provide the different tools and machines that we buy in expensive prices, at a fraction of cost, thereby, ensuring that they are durable and suitable for our own environment.

I grew up at a shoe shop. My family makes shoe for a living, but that didn’t interest me much. I was much more interested in metal works. I joined the Technical School, and I was quite good at it. I started to be more interested in the field after I joined the school. I started to work on different things. For instance, my father was facing some problems with a shoe machine he had when there was no power. I came up with the same machine, but instead of being powered by electricity, my machine was powered by water. This was a great help. Subsequently, I started to do the same with other people. The results and feedback I got after my work inspired me. Afterwards, I opened a working place at Medeber, where I more formally started to work in my profession.

They are many! Back to when I was doing my national service, I was able to come up with a Leister motor machine that grinds gold-core just as 800 men can do. Moreover, we reused and made something useful out of the Awgaro skeleton which the Italians had used and implanted in the Zara mining center. As for the machine, it was a great help in regard with saving time and human energy. As well, the Awgaro skeleton, instead of leading to unnecessary costs, we reused something that was meant to be thrown away. After that, I made a bread slicer machine by melting aluminum, which was the first locally produced machine, and also a cement block machine that cuts up the stone and puts it down. Besides those machines, the most essential and noteworthy was the prosopis tree-cutting machine. My machine cuts up the tree and prepares it as firewood for smokeless ovens. This was one of the biggest projects and was useful for the Government and local institutions. Another effective machine is my sugarcane grinder. It can help farmers by grinding the sugarcane and turning it in to wheat bran which can be consumable by animals. Last, I also have developed a machine that helps farmers separate the seed from the chaff during harvest. The crop thresher machine which used to be imported is now locally available. It offers great relief for farmers, and saves them considerable time and energy. The machine can be used with a variety of crops and processes up to 1500kg per hour!

Yes. Most of them are being used by different individuals, as well as government institutions. For instance, the IFAD project in the Gash-Barka region used my sugarcane machinery. The machine was selected over the previously imported machines based on a comparison of price, durability, ease of use for local farmers, and effectiveness. Furthermore, the Elaber’ed agricultural and dairy production company uses my machine which slogs dry and wet sugarcane, while Halhale College uses my sugarcane and sweet potato grinder. Shemsheia agricultural company also uses my sugarcane grinder machine, and Dubarwa Animal Food Production utilizes a large mixer I had assembled for them. These are just a few that I can remember off the top of my head.

It is my family who has helped me get here today. My parents and siblings have supported well over the years. I am very grateful to them. Besides my family, different individuals have extended their support as well.

After my release from the national service due to an injury, I rented a workhouse garage and I am involved in producing different machines for different institutions. Also, I sharpen agricultural materials with a machine I have.

It works with used metal oil. This metal oil is something that can pollute soil and water, but I have come up with an idea to use it as energy to melt metals. The regular machine for

the sharpening of metals usually works with charcoal. Just think about how many trees are going to be cut down for the charcoals. It’s quite sad, really. Instead, I employ the used metal oil which had been essentially useless and made it productive for use on my machine.

Besides the shortage of materials and money, my biggest problem is that I don’t have a place to work. The place I am working today is a rental place. If there was a location featuring a large establishment with the materials needed, it would be a great help in providing the different machines needed for nation building. We have the potential, but support is needed to expand our abilities.

There is a young generation that is interested in innovation. They have the minds which can be the backbone of the country. The things that are presented during different occasions are mind-blowing.If they are supported and encouraged I know they can do well. There should be a space where we could teach, learn, and share ideas. That is the only way we can develop.