The Non-Aligned Movement: A Primer 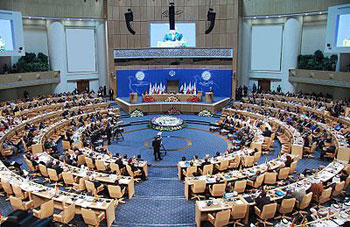 Last week, an Eritrean delegation, led by Foreign Minister Osman Saleh, participated in the 17th Summit of the Non-Aligned Movement (NAM). The summit of the 120-nation group, which was attended by several Heads of State and Government, was held on the resort island of Margarita, located in the Bolivarian Republic of Venezuela. Eritrea’s official statement at the summit was wide-ranging, noting the many challenges faced by many of the NAM’s members (including Eritrea), calling for the defense of the principles of the sovereign equality of nations, respect for territorial integrity, political independence and peaceful coexistence, and the respect for the dignity and rights of citizens. Eritrea also

reiterated that the promotion and protection of human rights should be based on the principles of cooperation and dialogue, and it called for greater solidarity among member states, expressing its readiness to work with other countries to realize common objectives. Significantly, Eritrea reaffirmed solidarity with countries suffering illegal sanctions or socio-economic and political aggression, including Cuba, Sudan, and Venezuela.

The Non-Aligned Movement (NAM) was founded in Belgrade in 1961 by nations which wanted to avoid formally aligning with the United States or Soviet Union during the Cold War. Recall that the Cold War coincided with the process of decolonization. Generally, the superpowers viewed decolonized states as pawns on a global chessboard and sought to influence them through military support and economic aid. According to the respected scholar Samir Amin, the NAM reflected the Global South’s demand for liberation from the exploitative Global North.

The roots of the NAM extend to the Asia-Africa Conference held in Bandung, Indonesia in 1955. The conference, led by Indian Prime Minister Jawaharlal Nehru, Egyptian President Gamel Abdel Nasser, and Indonesian leader Sukarno, brought together leaders of 29 states from Africa and Asia to discuss common concerns and develop joint policies in international relations.

Subsequently, in Cairo, in June 1961, a meeting was held where participants outlined the principal aims and objectives of what would become the NAM and adopted criteria for membership. The latter included: countries should have an independent policy based on the coexistence of states with different political and social systems; countries should support movements for national independence; and countries should not be members of a multilateral military alliance concluded in the context of great power conflicts. Other requirements for membership in the NAM include: respect for the sovereignty and territorial integrity of all nations; recognition of the equality of all races and all nations; abstention from intervention or interference in the internal affairs of another country; promotion of mutual interests and cooperation; and respect for justice and international obligations.

Several months after the Cairo meeting, in September 1961, the first Conference of Heads of State or Government of Non- Aligned Countries, attended by 25 countries, was held in Belgrade, largely through the initiative of Yugoslavian President Josip Broz Tito.

Currently, the NAM boasts 120 member countries, representing approximately two-thirds of the United Nations’ members and over half of the world’s population. Furthermore, a number of countries and organizations (including the African Union and Arab League) hold observer status at the NAM.

Eritrea joined the NAM in 1995. Notably, the country’s foreign policy has long been firmly based upon principles of non-alignment and it is willing to work with anyone and everyone, through mutual respect and cooperation. Epitomizing many of the central tenets of the NAM, “Eritrea’s sovereign choice has always been, and remains, that of aversion to dependency, polarized alliances and the suzerainty” of a big brother.

Eritrea’s focus on non-alignment and the avoidance of foreign manipulation dates back to the days of the long independence struggle when the country experienced firsthand the opposition of both global superpowers. At different times during the struggle, Ethiopia, Eritrea’s colonial oppressor, received vast economic, military, and political support from the United States and Soviet Union (during some periods, both superpowers supported Ethiopia at the same time, a largely unprecedented development). In the early 1980s, speaking of the EPLF’s continued unlikely victories and on-the-ground developments, leader Isaias Afeworki described, “We have learned how to rely on ourselves… We prefer to refrain from entering into big politics…But we would not be misled by any support that comes to the Eritrean struggle if it’s aimed at manipulating the situation for interests that do not conform with the aspirations of our population” (Firebrace and Holland, 1984: 127– 140). Moreover, during its Second Congress in 1987, the EPLF outline how Eritrea would be non-aligned and independent.

The NAM has focused on creating an independent path within the international political system and avoiding the influence of the major powers. Although its members possess increasingly diverse political and economic structures and hold a wide-range of interests or positions on trade and the international system, the NAM provides an important ideological unity. In addition to navigating the tensions of the Cold War, the NAM has declared its commitment to world peace and security, and focused on the right of independent judgment, the peaceful resolution of disputes, opposition to the stationing of military bases in foreign countries, and the struggles against imperialism, colonialism and neo-colonialism, racism, and foreign aggression, occupation, or domination. The NAM has also worked towards the restructuring of the global economic order (for example, through the New International Economic Order [NIEO]), as well as advocating solutions to global socio-economic and other problems. The NAM has worked in collaboration with other international organizations of the Global South, such as the Group of 77, and it also has several working groups and committees dedicated to specific topic areas, including Palestine, disarmament, human rights, and peacekeeping.

Summits are generally held every three to four years (although the duration between the second and third summits and the twelfth and thirteenth summits were six and five years, respectively). The position of Chair of the NAM rotates between countries and changes at every summit to the country organizing the summit. This year’s summit follows the 16th NAM summit which took place in Tehran, Iran, in August 2012. At that summit, Iran took over from Egypt as the Chair of the NAM; this year, the position of Chair of the NAM passes from Iran to Venezuela.

Topics raised during this year’s summit included, amongst others, Cuba’s recent rapprochement with the United States after decades of socio-economic and political sanction, subversion, and terrorism, and Venezuela’s significant ongoing challenges. Venezuela, which has for years suffered considerable socio-economic and political pressure from the United States (including US involvement in a short-lived right-wing coup against current Venezuelan leader Nicolás Maduro’s predecessor, Hugo Chavez), is undergoing a major economic crisis, food shortages, and triple-digit inflation.