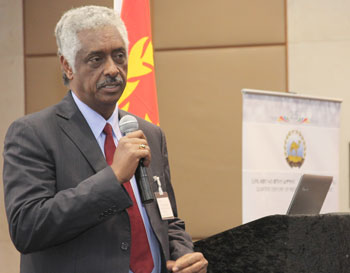 Prof. Tadesse Mehari, Executive Director of the Commission of Higher Education in Eritrea, participated at the 28th Annual European Association for International Education that took place from 13-16 September in Liverpool, the UK.

Asmara, 22 September 2016- Prof. Tadesse Mehari, Executive Director of the Commission of Higher Education in Eritrea, participated at the 28th Annual European Association for International Education that took place from 13-16 September in Liverpool, the UK.

At the Conference in which 5200 experts from 80 countries attended, Prof. Tadesse gave a presentation on Migration and the Root Causes and on the prospects of Cooperation in Education.

As part of his visit, Prof. Tadesse gave briefings regarding the role of the Eritrean professionals in the enrichment of Eritrean human resources as well as in the nation building process. He gave the briefing at the seminar hosted by the Embassy of the State of Eritrea in the UK and Northern Ireland on 17 September.

At the seminar in which over 70 Eritrean professionals took part, Prof. Tadesse illustrated on the current situation of higher Education in Eritrea since its formation in 1992. He also explained the milestones and achievements recorded in recent years along with the challenges faced and means used to overcome them.

In connection with the seminar, the Eritrean Ambassador to the UK and Northern Ireland, Mr. Estifanos Habtemariam underlined that the long term vision of the Eritrean

Government is to build a developed country that ensures social justice and called on the Eritrean professionals residing in the Diaspora to reinforce organization and contribute their part in the national development endeavors.

The participants on their part called for strengthening the link with the Eritrean professionals in the homeland.

It was also reported that there are over 330 Eritrean professionals with wide range of specialization including health science and medicine, law, journalism and media, engineering and technology, social and economic development that are registered to come voluntarily and contribute in the human resources development in their homeland.