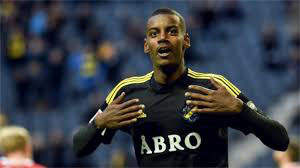 Get used to Eri-International, an increasingly popular sports blog, writing about the newly-turned 17 year old Alexander Isaac, who is taking the Allsvenskan (Swedish Premier League) by storm. On September 21st, Alexander Isaac (an Eritrean-Swede) celebrated his 17th birthday with two goals in a high profile football match. As early as the 16th minute, Isaac was looking at his third opportunity at a goal against a strong team in Djurgården. He scored his first goal, which was a beauty, with ease.

However, what makes Alexander Isaac a unique player is how difficult it is to keep track of him around the goal area. He is very adept at finding free spaces and he can also easily find his teammates – a trait that the most experienced players generally develop after years of playing the game. The huge game for AIK (Alexander’s team) against Djurgården, locally known as the “Derby”, was an opportunity for the young birthday boy to show what he can do, and did not disappoint as he added a second goal in the 65th minute to extend AIK’s slender lead to 2-0. Teammate Stefan Ishizaki crossed a beautiful ball with his left foot and Alexander jumped high, surprising the opposing defense with a great header.

After the game many people were talking about this young man who is playing the game of soccer in the international arena at such a young age. One of his veteran teammates, Chinedu Obasi, who represents the Nigerian national team, gushed that Alexander, “could be the new Zlatan Ibrahimovic [one of the top strikers of his generation].”

While Alexander was delighted by the nice words, his maturity level (and probably the Eritrean traits he got from his beautiful culture) got over him as he responded in a humble way, simply saying that he has a long way to reach those high levels.

Eritreans (and I am sure millions of Swedes) can only proud of the professional level of this young man. He has the ability, the “know how” and, most of all, the maturity of a person who is far more seasoned than his young age. While many teams around Europe are after him, he has committed to staying with his hometown team AIK Stockholm. A simple young man who thrives on his ability and loyalty to his home team, Alexander’s great relationship with his hometown folks is clear for all to see.

Personally, I wish that he would represent Eritrea and that Eritrea’s national team program would have been good enough to be able to give him a choice. At the same time, there is little doubt in my mind that the Swede’s will not let him easily slide by. Last, Happy Birthday Alexander Isaac! I hope you continue to inspire millions of people and represent the Eritrean people while also sharing your Swedish culture.

Making Eritrea a Hub of Tourists