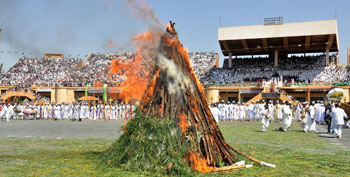 Meskel Holiday (Finding of the True Cross) was celebrated today nationwide with enthusiasm.

During the ceremony in which religious leaders, senior Government and PFDJ officials, diplomats as well as thousands of the faithful took part, the Secretary of the Holy Synod, Abune Lucas headed prayers followed by religious hymns around the Damera torch.

In a speech he delivered at the ceremony, Abune Lucas called on the Eritrean people to reinforce unity, mount united efforts for the nation’s prosperity and for mutual cooperation among citizens.

Memhir Elias Habtai on his part said that Meskel Holiday is celebrated at a time in which a good harvest is expected and wished good harvest season.

Abune Lucas, Secretary of the Holy Synod, and the Governor of the Central region, Maj. Gen. Romodan Aweliai jointly lit the Damera torch.