A look back at ICES 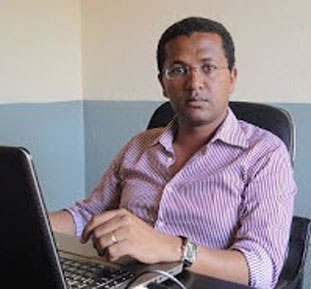 Although having taken place several months ago, the International Conference on Eritrean Studies (ICES) continues to be a topic of positive discussion. Today, we present the first part of an interview by Kemey.blogspot with Senai Woldeab. The conversation focused on ICES and its objectives.
Senai Woldeab is an attorney and Assistant Professor of Law at the School of Law, College of Arts and Social Sciences (CASS), as well as a legal advisor to the Minister of Justice, Fozia Hashim.

What was the genesis of the conference?

The idea for holding a conference like the ICES has been around for quite some time. The main thrust for organizing the conference was the recurrent conviction that it would make more sense if Eritrea-related academic conferences were held in Eritrea.

There was one in 2001. Is this one any different than the previous one?

Yes, there was a similar conference in 2001. I did not participate, but hearing from people who organized and/or participated in the conference, I came to understand that the two events were similar. They involved vibrant academic discussions on various Eritrea-related matters.

Would you give us some statistics? For example, how many people participated? How many presented? What topics were covered?

We have just finished preparing the report of the conference, which will soon be available to everyone online. The report will give a clear picture on the number of people who participated and presented papers. A total of 119 papers and six plenary lectures were presented during the three days of the conference. The papers were presented during seven parallel sessions at the Hotel Asmara Palace. We clustered the papers in terms of the issues they discussed. With an average of three papers presented during each session, there were forty topics covered. Topics as varied as archeology, philology, linguistics, education, foreign policy, copyright, archiving, gender, the Eritrean Diaspora, literature, FGM/C, architecture, sustainable development, crime prevalence, cultural, heritage, Horn of Africa and Red Sea issues, migration, colonial matters, food security, and others, were covered.

Applications for attendance were far beyond the venue’s capacity. So we gave late applicants one-day passes to attend the event. By our estimation, more than 450 people

attended the conference, without counting high-level government officials and diplomats, or members of various international organizations.

Was the conference entirely self-financed?

The Government of Eritrea and the UNDP co-financed the conference.

What is the plan for the future?

Our immediate plan is to prepare the conference proceedings. More than half of the presenters have already sent their papers for that purpose. Future plans include holding area-specific mini -conferences which will merge into the next ICES which may be held in two or three years. If these events are sustainable, an Eritrean studies institute can be established.

What were some of the comments from participants and presenters about the quality of the presentations?

Our general impression so far is that the participants appreciated the quality of the papers and the nature of the discussions on the presentations. We prepared and distributed evaluation forms during the conference. 133 persons (presenters and participants) submitted their evaluation and a significant majority of them appreciated the organization of the conference and the opportunity created by the event for debates and networking.

That was a very encouraging part of the conference, especially seeing young Eritreans (including two papers presented by students who had just completed their classes, graduate assistants and very recent graduates) presenting their papers. Arguably the most attended session (excluding the six plenary presentations) which overflew with participants – I had to just stand on the crowded corridor to hear the presenters speak– was a regional security and political culture session where three young Eritreans Isaias Teklia (from the School of Law), Ghebretnsae Damr (from the Research and Documentation Center/RDC) and Amanuel Zekarias (from the Ministry of Foreign Affairs) delivered interesting papers on Scholarly Echoes of Ethiopia’s Claim of Sovereign Right of Access to the Sea, Social Capital and its Manifestation in a Political Culture: the Case of Eritrea, and Regional Security: Mapping Eritrea’s National Security Approach in the Horn of Africa, respectively. We, the organizers, agreed with the evaluations which noted the encouraging participation of young presenters from Eritrea and from abroad.

With 50% entries from presenters, there are about 1,500 pages of articles collected. Give and take with another 1,500 pages from the remaining entries, what is the plan for these entries?

Our plan is to issue the proceedings in two or three volumes.

We had invited government institutions and other national/ international organizations to attend the conference so they can reflect on papers relevant to their respective activities.

This was done in the hope that said entities could further discuss on the issues raised by papers of concern and see how the recommendations of the papers can be incorporated in policies.

*Editor’s note: Part two will be featured in the next issue of Eritrea Profile