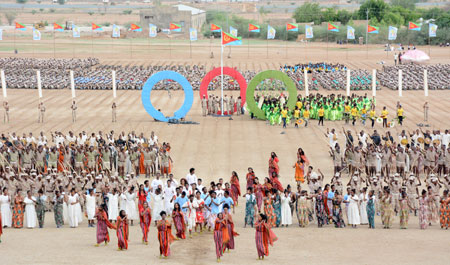 A rite of passage in Eritrea, Sawa is where a young Eritrean goes to finish his or her senior year in high school, receive military training, and get inducted into the Eritrean Defense Forces (EDF). After reporting to Sawa, the young Eritrean undergoes exams and screening, goes through boot camp, and starts the most influential period of one’s life. Women generally serve half as long as men for a variety of reasons. Upon the completion of matriculation exams and graduation from Sawa, these young soldiers and their commanders are entrusted with protecting the sovereignty of the State of Eritrea.

They’ve performed marvelously in that role after taking over the responsibility from the Yikealo generation that brought independence.

At Sawa, a young Eritrean meets fellow citizens that he/she would never normally come across in everyday life. Everyone knows about the military training part of boot camp at Sawa, however, what isn’t talked about enough is the “melting pot” role that Sawa plays in bringing Eritrea’s diverse youth from all nine ethnic groups to learn and study together, train together, get introduced to each other’s culture and languages, serve together in military units, compete in organized sports and form bonds of friendship that last a lifetime. In short, Sawa erases ignorance and offers young Eritreans from all ethnic backgrounds a shared experience at a young age.

For the military part of boot camp, every 18-year old Eritrean receives the same basic training. Those who have completed boot camp at Sawa describe the basic training as including firearms training (learning to disassemble/assemble to fire several firearms and heavy guns used by EDF), field-training (no watches, little food or water, challenging physical and psychological training), discipline training (completing tasks in short time frames), guard duty practice (no sitting, resting and full awareness), and combat training. Those who are deemed to be outstanding soldiers or show leadership skills are selected to become commanders and receive additional training.

Boot camp at Sawa is anything but easy. At the end of their training, the young men and women of Sawa emerge as mentally tough and confident soldiers who can be trusted with the defense and security of the Eritrean State. Ironically, I have talked to Sawa graduates from the 20th round who credited their military training, particularly the field training, for helping them make it through the unforgiving and harsh elements of the Sahara Desert on their way to the Mediterranean countries. Many of the Ethiopians who attempted the journey with them, lacking the field training and mental toughness of a Sawa soldier, didn’t make it.

Even those who end up immigrating to Europe or the United States later on in search of higher living standards readily admit the training they received at Sawa (military and vocational) has equipped them with practical abilities to face life and a network of friends from all sectors of the Eritrean society that they can rely on. Many young Eritreans who end up in the diaspora for one reason or another have become successful businessmen starting businesses and companies from scratch in countries like Uganda, Kenya, South Sudan, Angola and South Africa, owing in part to the training they received at Sawa and the social networks they built there.

Even our beloved President Isaias Afewerki, who leads by personal example, has put his own children on a bus and waved goodbye to them as they departed for Sawa with all the other kids their age. Like any other parent I am sure President Isaias considers his children to be the apple of his eye, but he is willing to offer them as a potential sacrifice for the state.

The fact that almost everyone under the age 45 in today’s Eritrea has received his/her military training at Sawa means that Eritrea can field an army of 300,000 plus within 48 to 72 hours in the event hostilities break out with one of its neighbors.

In essence, the society and army are one in Eritrea, as a broad spectrum of Eritrean society serves periodically and is a reservist who can be called-up within 48 hours even when leading a civilian life. Eritrea being a small nation with limited resources, the army also assumes a variety of national-social functions for the society at large, providing community service, and staffing schools, clinics and some government ministries. In an attempt to give all Eritreans a chance to perform national service, the army now offers several tracks to the country’s different population groups after they complete the required military training.

Graduation from Sawa is a milestone event for Eritrean families as they always make the trip down to Sawa to videotape their child’s graduation and induction into the army. Although the vast majority of the students at Sawa are Eritreans from inside Eritrea, there have been many young Eritreans with dual nationalities born in the diaspora from countries like Canada, the United States, Germany, and Sweden who have voluntarily completed their basic training at Sawa and taken the oath to defend the State of Eritrea. The Sawa graduation ceremony, which is always held in the month of June, is a well-attended event and a source of pride for Eritrean families. Graduates are always treated to a speech by their Commander in Chief, President Isaias Afewerki. The event is popular with diaspora Eritreans as well because it coincides with their summer visit to Eritrea. Most diaspora Eritreans on their summer holiday in Eritrea make the trip down to Sawa to express their solidarity with the Eritrean State.

There are differing opinions on the length of the National Service or who should serve in what capacity, but there is no denying the “melting pot” role that Sawa plays because the Eritrean Army is an army of all the people, those from highlands and lowlands, Muslim and Christian households, sons and daughters of nomads and rural farmers, the urban middle class and villagers, disabled and healthy, courageous, and hesitant. National Service pushes young Eritreans from all nine ethnic groups through a mixer at Sawa, treating them equally, placing the same demands, and entrusting the same great responsibilities regardless of socio-economic, religious, or ethno-linguistic backgrounds. National Service is the cement, the building block, the embodiment of past, present and future of Eritrea.

The Government of Eritrea has reportedly concluded that it will, at some point in the future, shorten the length of National Service to its original timeline of 18 months. But it should never abandon the National Service requirement as a nation-building tool because in addition to guaranteeing the country’s sovereignty, it performs an important social role as the melting pot of Eritrean society. Today’s Sawa students will become tomorrow’s army commanders and mentors of the next generation of Eritreans, thereby enabling the values learned at Sawa – patriotism, social harmony, and military service to country – to become deeply embedded within Eritrean society.

Examining Education: An Assessment of 2015/16