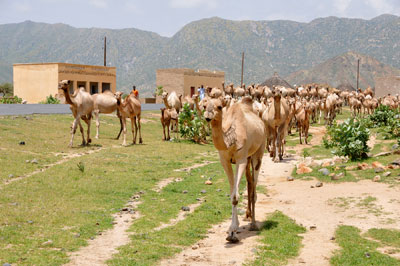 Generally speaking, people tend to fail to appreciate what is proximate and within their hands. A traditional Eritrean saying states, “ab edka zelo werqs darga cherqi,” which roughly translates as: “anybody feels not a precious thing they own but take it as cheap.”

It is quite impressive to look at wealthy nations’ developments and infrastructural advances. The skyscrapers, stylish and imposing real estate, and huge human-made landmarks get all our attention.  But that doesn’t belong to us. What is ours is found not far away, and only needs us to pay a visit. It is not just the cities or main towns that hold the beauty of a country; often, the most fascinating subjects lay outside their boundaries. So every once in a one while, one needs to take a journey to visit some of these, at times, overlooked sites that are relatively near when compared to the attractions miles away.

All of this reminds me of the lyrics of an old song which goes “Zuro mo Hagerga Temt Teazeba Habtam Ztefetro Adi Wehayz Ruba… Bealti Akranat Abeyti Taba…” The song simply reflects on the beauty of local Eritrean landmarks and culture and encourages listeners to visit all of the country’s territory. Seemingly following its suggestions, I did visit some of the unique and attractive places in the country.

Without overstating, I have been to some of the most remote areas of the country, except the Southern Red Sea region (which I hope to see in the future). I have been as far as Sawa in the Gash Barka region and also visited the Anseba region, which was on my way there. I have also managed to visit some parts of the Debub as well as the Northern Red Sea region. Within the Maekel region, a useful departing point, the major cities, towns, and roadways make me feel like the song has delivered its message. Locals should take every opportunity to explore their country, be it with family, colleagues, friends, or as an educational trip. Wherever the destination is, there are often an array of attractions, as well as interesting things along the way that are sure to capture the attentions and interests of travelers.

The long, winding road to the Fil-Fil Solomuna rainforest is, in itself, a mesmerizing infrastructural feat. One cannot help but admire how gorgeously constructed the road is before actually reaching the final green zone. Moreover, historical and archeological sites can be found within different parts of the country, and their appearance within the background is a stunning reminder of the inherent beauty and treasures of the nation.

Recently, I had the opportunity to attend a tour organized by the May Mslam Dam (or commonly referred to as the Gergera Dam). It is massive, appears well-built, and is part of the national strategy and policy of sustainable development. Based on information gathered from sources at the dam site (including the engineer and project manager), the May Mslam Dam is one of the largest projects undertaken by the Government of Eritrea, representing a considerable investment toward socio-economic growth and sustainable development. An engineer at the site noted that approximately half a billion Nakfa was extended towards the completion of the dam, the construction of which began in mid-2011 and finalized by 2014. Some irregularities in the construction were discovered in between due to a shortage of supplies and labor; however, only after two years from its formal beginning, the majority of the task (approximately 75%) was done in about only 6 months. The dam has a 35 meter diameter, with a 7 meter depth and stands 38 constructed above the ground.

The foundation raised above consists of approximately a 6 meter diameter and is stretched nearly 750 meters long.

Four rivers feed the dam: from Guh Chea, from the Tslma villages, from Adi Halo, and from around the Emba Teqera area. Collectively, these cover an area of 431 sq. km until the last point of the dam, but overall the dam covers 3.7sq.km, and currently holds around 33 million mm cubed of water and can reach up to 50 million mm cubed. In addition to the rivers, the dam can hold significant supplies of rainwater (extending up to approximately three years).

Segen Construction Company provided the technical management, design and supply for the dam, and was joined in construction by military forces, students, and citizens engaged in community-development summer programs from all over the nation. Importantly, the dam serves to reflect how Eritreans, from all walks of life, have been engaged in promoting development and working to tangibly improve the standard of life across the country.

The main aim of the dam is to support the surrounding agricultural areas and improve the livelihoods of people living in the neighboring towns. Currently, a pilot project is in progress within the Halhale and Tslma agricultural fields, using water supplied directly from the dam. As well, the dam will help contribute to people’s daily lives by supplying clean water for the towns of Dekemhare, Dubarwa, Mendefera and other small towns.

Importantly, the dam and my visit in connection with International Tourism Day underscore that people (citizens in particular) should take the time to visit and explore a range of sites. For locals, visiting developmental sites can help familiarize them with the ongoing progress and realities of their nation, as well provide a glimpse of the future. It is important to also note that many other significant infrastructure and development projects are underway around the country, focused on improving socio-economic growth, while encouraging social inclusion and tangible, sustainable development. My advice? Go explore the really fascinating sites…tour, see, and believe!

Examining Education: An Assessment of 2015/16

Duties of an Artist